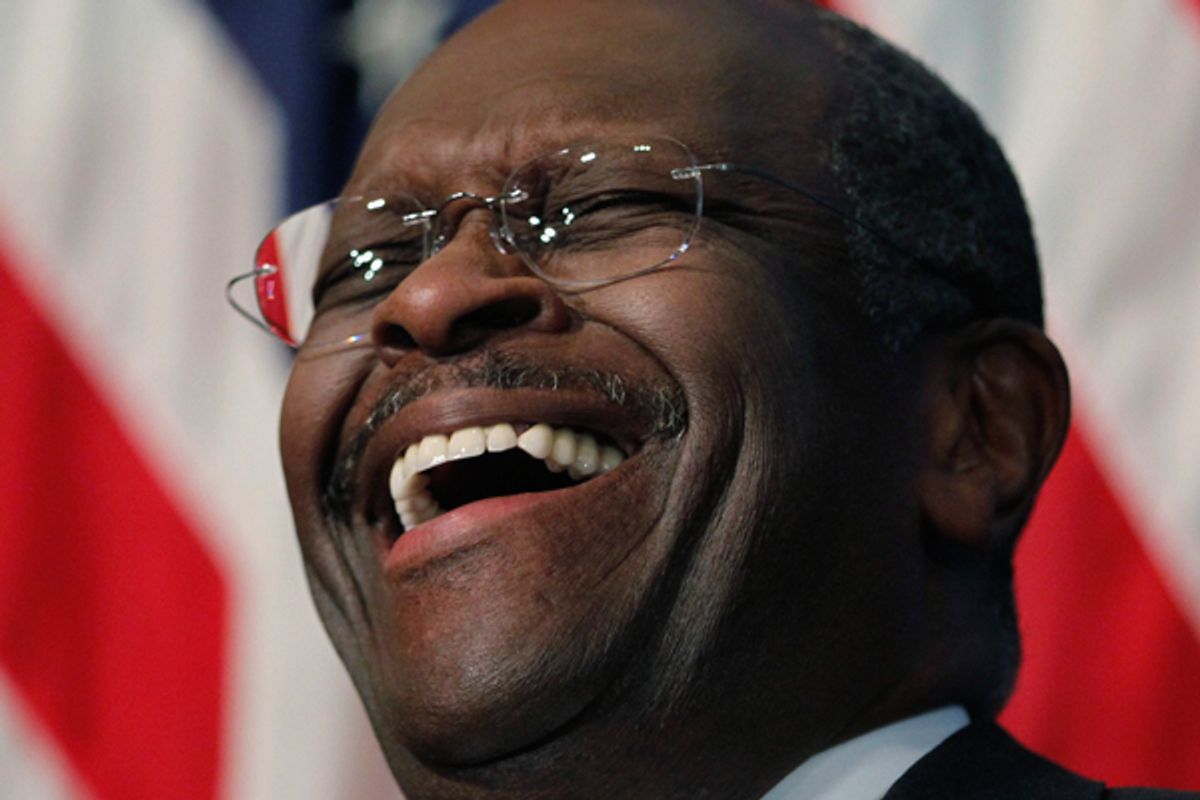 It doesn't seem like this will move the ball down the field much, but after reaching an agreement with the National Restaurant Association, the lawyer for one of the women who accused Herman Cain of sexual harassment issued a statement on her behalf this afternoon that accused the GOP presidential candidate of "inappropriate behaviors and unwanted advances."

The woman had been prohibited from speaking out under terms of her severance agreement with the NRA in the late 1990s, which included a non-disclosure agreement in exchange for a cash settlement reportedly worth $45,000. Earlier this week, her lawyer, Joel Bennett, had indicated that she was interested in speaking out to contest Cain's claims that he'd been "falsely accused" and that he'd never engaged in sexual harassment in his life. But Bennett later said that she'd decided she didn't want the attention that would come with a public statement. Instead, Bennett began negotiating with NRA officials on what mutually acceptable language for the statement he made this afternoon.

The statement, which claims that the woman was the victim of "several instances of sexual harassment by Cain," doesn't go into any detail about what he allegedly said or did to her. Thus, the scandal remains stuck in the same murky place it's been for most of this week: We know that Cain was accused of sexual harassment and that fairly substantial settlements were released, but we still have only the vaguest sense of what specifically he was accused of. Here's the full statement from Bennett, per Politico:

In 1999 I was retained by a female employee of the National Restaurant Association concerning several instances of sexual harassment by the then-CEO.

She made a complaint in good faith about a series of inappropriate behaviors and unwanted advances from the CEO.

Those complaints were resolved in an agreement with her acceptance of a monetary settlement. She and her husband see no value in revisiting this matter now, nor in discussing this matter further, publicly or privately. In fact it would be extremely painful to do so.

She is grateful that she was able to return to her government career, where she is extremely happy serving the American people to the best of her ability. She looks forward to continuing to work hard for them as we face the significant challenges that lie ahead.

She wishes to thank the media for the restraint that they have shown, her family -- especially her sisters -- for their love and support, her colleagues and supervisors for their patience and forbearance and her advisors for their wise counsel, and most of all, her dear husband of 26 years for standing by her and putting up with all of this.

Everyone is entitled to be treated with dignity and respect in the workplace. Sexual harassment is unfortunately very much alive and with us even today, and women must fight it in all kinds of workplaces and at all levels. My client stands by the complaint she made.