Capitalism fading in the evolutionary revolution

Occupy Wall Street is a sign of a new economic order. What comes next? 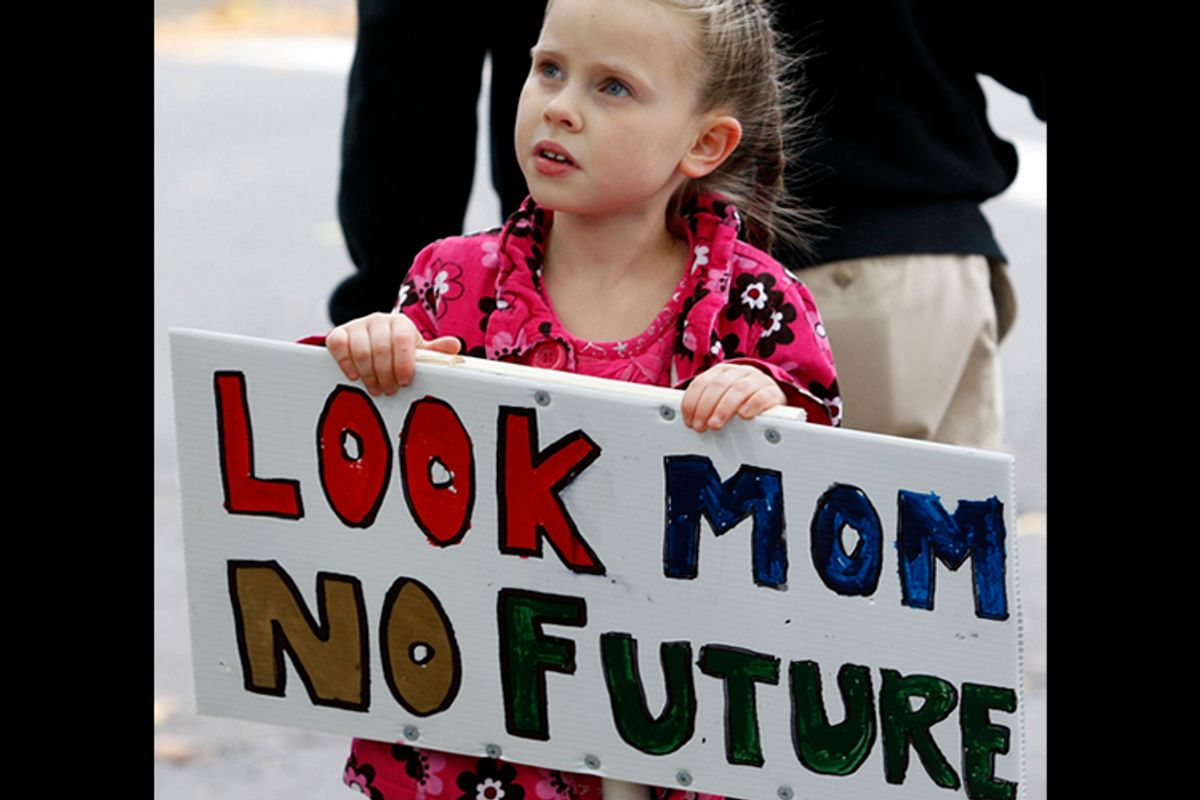 The "occupations" now building around the country are a necessary and justified response to the outrages of a political-economic system that substitutes posturing for decision-making, and looks the other way as the top 1 percent runs off with almost a fourth of the nation’s income and more wealth than the bottom 90 percent taken together. The largely youth- and student-organized efforts might even be historic -- if, that is, they come to terms with the reality that the challenge is systemic, not merely political -- and, critically, that the current crisis is also highly unusual in its demands.

The systemic problem is obvious. While using very different rhetoric, progressives like former Labor Secretary Robert Reich and Marxists like Richard Wolff agree, first, that the economy is failing for lack of demand -- and, second and most important, that this failure is now "built in" to the system. Labor unions once were powerful enough to raise wages and stabilize the system (and consumer demand). Those days are over: Union membership peaked at 35.4 percent of the labor force at the end of World War II; it is now at 11.9 percent, and falling (a mere 6.9 percent of private sector workers are now union members).

The banks and Wall Street are an appropriate first target. But the deeper reality is that the economic "system" that defined a particular brand of corporate capitalism held (weakly) in check by labor is fading before our eyes. Moreover, the same labor base gave liberalism sufficient power to enact modest reforms -- including regulations to try to keep the bankers in line. That "system" is decaying too. It is further complicated by global competition, which continues to weaken the entire structure, undermining both labor and communities, even as major corporations flee the country for global markets.

This is to say nothing of the simultaneous rise of the new Tea Party right, and a politics that further undermines the traditional system of corporate capitalism held to a certain minimal standard by reform-oriented movements.

If there is path out of this mess, it is all but certain to be very different from the traditional model. Which means either that a "next system" will slowly be developed over the coming decades or the decay, pain and outrage will continue.  This poses a profound question: If traditional reform is flagging, and "revolution" even less likely, what should the occupations around the country really get serious about? Denunciations of the ongoing evils and attempts to reinvigorate traditional progressive tax, regulatory and other reforms are a start, but only that.

A more fundamental  approach is to look where the pain is greatest -- at the farthest ends of the internal empire: namely, the deteriorating local communities and deadlocked states. At one level the dominant reality is conservative, as is always the case when a system begins to falter, and before new possibilities (sometimes) occur.

Nonetheless, the pain this causes has its own logic. Our modern media are so oriented to "horse race politics’"at the top, and so bereft of funds to do serious investigative work, they simply do not know what is happening at the bottom. Yet, if "who owns property" is one of the defining characteristics of any system -- and particularly one where the top 1 percent owns more wealth than the bottom 90 percent -- a probe beneath the headlines can reveal some very interesting developments for those who care to look.

Over the last three decades, for instance, more workers have become owners of their own companies than are members of unions in the private sector; indeed, 5 million more. Simultaneously, there has been increasing experimentation with unions within such firms, and with new ways to increase participation and control. There are also more than 4,500 nonprofit community development corporations that operate affordable housing and other neighborhood programs. Approximately 130 million Americans are members of co-ops.  In Cleveland, an innovative group of linked cooperatives has set new standards for community-building economic change."Social enterprises" are developing in communities throughout the nation that transform the ownership of capital into businesses, the sole purpose of which is to provide community services.

At the state level, there have also been little-noticed developments that change who owns capital in a public direction. For instance, public venture capital funds in at least 23 states invest directly (and take an ownership stake) in new companies in their states. CalPERS, the California state pension plan, regularly uses its investing to achieve public purposes. The state of Alabama does the same, including support for worker-owned firms. Alaska famously translates the ownership of oil derived public assets into dividends for all its residents.

As healthcare pain and financial distress have deepened, numerous states have been also developing a range of other new strategies. For instance, even as the Obama healthcare reform law has come under intense attack, more than 15 states are exploring one or another form of single-payer healthcare. Another 14 states are considering the creation of state banks following the long-established North Dakota model, a trend that is also likely to grow.

During the prehistory of the Progressive Era, numerous state and local efforts developed out of the pain of that time, only to become the basis of national New Deal legislation when the right political moment occurred. Given the huge federal bailout funds involved in the financial crisis, a controlling public ownership share of one or more major banks could easily have been achieved. During the next crisis -- and there will be one! -- public anger might well make this happen.

Similarly, though conservative attacks on healthcare are now in the ascendancy, the pain this will cause is also likely to produce a backlash -- either state by state, leading up to national change; or when major corporations involved in global trade join with others burdened by cost to demand the kind of cost saving that only a single payer system can deliver.

Nor should it be forgotten that the federal government did in fact nationalize two major auto companies -- GM and Chrysler -- and did so in ways that brought a labor-based structure (the UAW’s Voluntary Employee Beneficiary Association) into partnership with both. Next time around new policies might decide to keep the companies for taxpayer benefit, instead of giving them away at cut-rate prices once the profits begin to flow again.

The emerging overall wealth-democratizing strategy might well be termed "evolutionary reconstruction" to distinguish it from stalemated reform, on the one hand, and the unlikelihood of a classical form of revolution, on the other.

So, yes, systemic issues -- including the question of who owns capital -- are at stake. The occupation movement is posing a very serious challenge. What comes next is critical. Finding a way to join energies with those at the very grass-roots level who have been quietly working to build the highly decentralized basis of the next American evolutionary revolution, community by community, should be a strategic priority. Indeed, it may offer the only serious way to transform new energies into historic change.