The president seems to think royal empathy will satisfy the occupation movement. The caucuses may prove him wrong 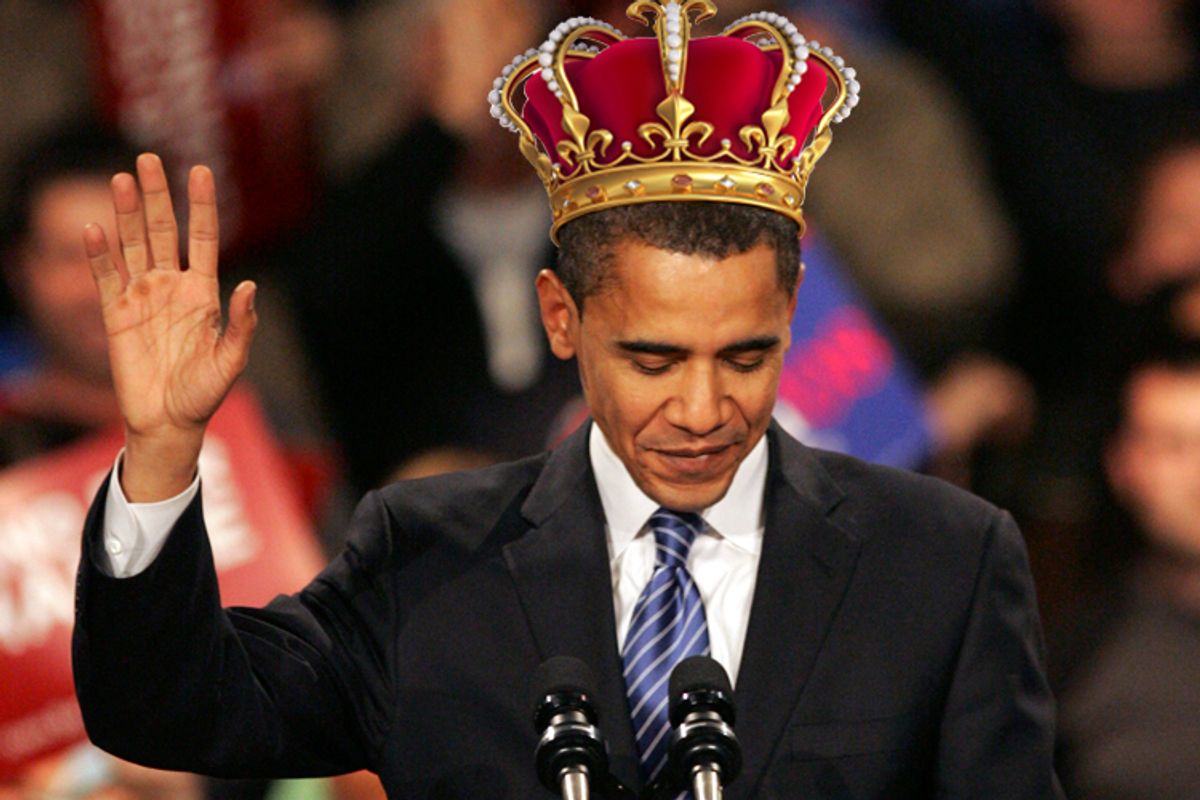 Barack Obama is not entirely at fault for underestimating the threat from Occupy Wall Street. The leaderless drummers in New York did not immediately seem poised to change the political landscape. They were mad at Wall Street. Bankers just kept going to work. Should they turn to their elected governors, who represent the only social force that could alter the class dynamic they decry, where would they find them? The Tea Party movement had the good fortune to arise just before the Democratic Congress went home to hold town hall meetings in the summer of 2009. All the OWS protesters had to look forward to was the coming of winter.

But every four years in Iowa, winter has a different meaning. It’s the season of the  presidential caucuses, the first round of the quadrennial election. And Monday some hoary experienced activists in the Iowa Occupy movement saw their opportunity. At the suggestion of former Iowa state representative and radio talk show host Ed Fallon and veteran Catholic peace activist Frank Cordaro, Occupy Des Moines voted to target the presidential candidates’ campaign offices in Iowa, including the headquarters of President Barack Obama. Then they sent an invitation out to Occupy movements around the country to come and join the demonstrations.

“Maybe they’ll let us in and give us cookies and something to drink,” Fallon said of the presidential campaigns in a phone interview with  Salon. "But I don’t have a lot of hope they’re going to come around [to the movement's position] in the next couple of months."

The 54-year-old Fallon, like the president, started his public career as a community organizer. Five years later, he mounted a successful primary challenge to the Democratic state representative and held the seat in the state Legislature for a decade. After leaving office in 2002, he has combined activism with hosting a talk radio show.

Having taken a lot of heat for backing Ralph Nader in the 2000 presidential election, Fallon has the vocabulary of insurgency down perfectly. He is, he says, “fed up with thinking, 'Vote for this guy or you’ll get the worse guy.'"

“In lieu of a better response, we are open to shutting down their headquarters," Fallon said, which some may interpret as a threat. Fallon is undaunted by the suggestion that his actions might serve to weaken the president and help elect a Republican.

“I hope the president is listening, but if he’s not his second term will just dig the hole deeper,” Fallon says. The protesters are looking to make their move between Christmas and New Year's, right before the caucuses begin. Yesterday, a sign went up at the DC Occupation: 'Let’s Occupy the Iowa Caucuses.'”

A spokesman for the Iowa Republicans told the Des Moines Register the idea was a “publicity stunt” and he characterized the Republican campaign volunteers as the true representatives of the American grass roots.

The Democrats are in a tougher position. In the Iowa occupation movement, the Obama campaign will come face to face for the first time with the unrest on the left that poses a challenge to the president's reelection dreams. So far, the Democratic Party's response has been insultingly inadequate. President Obama allowed as how he “understood” how the protesters felt, a political version of the legendary apology “I’m sorry you feel that way,” which does everything but admit that the recipient has a legitimate grievance. Iowa Democratic Party Chairwoman Sue Dvorsky parroted that line, saying that Iowa Democrats, too, "understand" the frustrations of the protesters. "That's why we're working hard to make sure President Obama is reelected," Dvorsky concluded.

The Iowa protesters aren’t buying it.

“Obama offered us empathy,” Ed Fallon says, “but he does not address our grievances. Why doesn’t he just fire Geithner and Summers?”

Fallon’s rejection of Obama’s emotional support points up the core meaning of the OWS insurgency. In the eyes of the protesters, the U.S. government has come to resemble the unaccountable hereditary monarchies that representative government was supposed to replace. The landed aristocracies of Europe have given way to the aristocracy of the richest 1 percent and the politicians of both parties whom they hire to implement their agenda at the expense of the vast majority.

In an aristocratic society, the subjects are grateful for a monarch's empathy. But in a democratic republic, the citizenry is insistent that their governors should act to alleviate its pain, rather than sympathizing with it. If Barack Obama and David Axelrod think aristocratic beneficence is going to satisfy this movement, they have a surprise coming.

If the "occupy the caucuses" movement gets some traction, things could also get interesting. As the sign in Washington suggests, people understand that the Iowa caucuses are the functional counterparts to the town hall meetings the Tea Partyers used so successfully in the summer of 2009. Any registered Iowa Democrat who will be 18 by Election Day can participate in one of the 99 Iowa Democratic caucuses (and participants can register as Democrats at the caucus door).

Once in the caucus, participants can vote for  any candidate, including an option that might appeal to the formless Occupy movement, "uncommitted." A movement of aroused, pissed off, youthful Iowa Democrats might be able to leverage the caucus process to change the political landscape in an evening. If anyone knows that's possible, it’s Barack Obama. The president famously said, "We are the people we've been waiting for." The OWS demonstrators probably weren’t the ones he’s been waiting for. But if the Occupy Iowa idea goes viral, they may be the ones he gets.