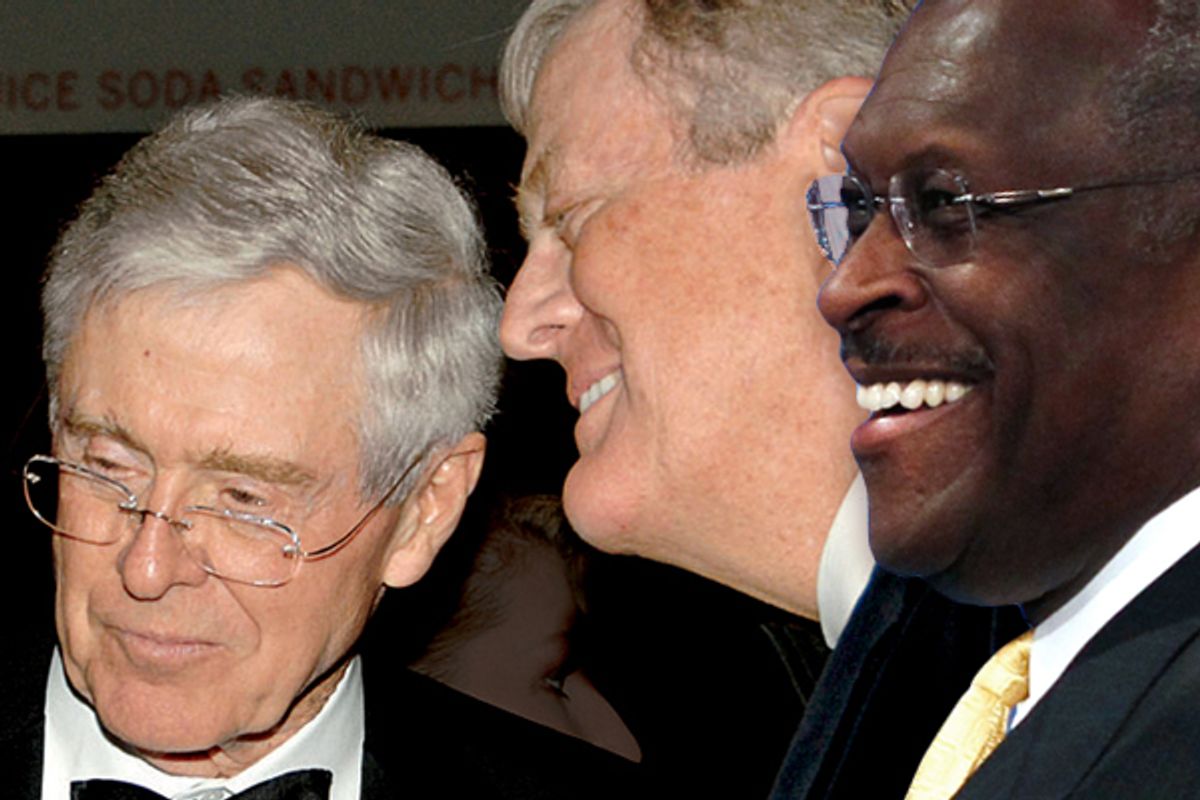 Cain, of course, strenuously denies the allegations of sexual harassment against him, but when it comes to charges that he's too close to the rapacious Kochs, he pleads guilty. “I am the Koch brothers' brother from another mother,” Cain told an Americans for Prosperity summit Friday, insisting he was “very proud” to know the right-wing Kochs, who run oil and gas behemoth Koch Industries.

But now Citizens for Responsibility and Ethics is asking for a probe of the ties between Americans for Prosperity and the Cain campaign. The Milwaukee Journal-Sentinel reported this week that Block used Prosperity USA funds to pay for Cain's travel and other campaign expenses. Block headed Prosperity USA before he joined Cain, and before that he was with Americans for Prosperity. Back before that, of course, he ran a Wisconsin judicial campaign that went so afoul of campaign law Block found himself barred from politics in Wisconsin for three years.

Maddow raised questions Thursday night about whether Americans for Prosperity might be functioning as a shadow Cain campaign, which would account for the former Godfather CEO's failure to assemble anything that looks like an actual presidential organization. Rather than running from that kind of speculation, Cain seems happy to encourage it. Slate's Dave Weigel reports that he entered the AFP event Friday to a thundering standing ovation, and immediately mentioned a New York Times story about the shadowy and possibly illegal connections between his campaign and AFP.

"The article tries to make a case of how close the Koch brothers and I are," said Cain.

"This may be a breaking news announcement for the media."

"I am the Koch brothers' brother from another mother!"

The room burst into applause. Koch stood up, and the titantron cameras found him, guffawing along with the front rows.

How the country is more united by knowing Cain is the third Koch brother isn't quite clear.  The black candidate's happy use of the joke "brother from another mother" is just another weird racial wrinkle in the Cain saga, in which the horrifying Ann Coulter boasts "our blacks are better than their blacks," presumably talking about liberal African-Americans, and Cain just smiles at the condescending support from right-wing whites. There was something deeply creepy about his appearance before AFP today, which felt more like entertainment than electoral politics. I flinched when the writer Touré called Cain's behavior "minstrelsy" this week, but I flinched even more watching Cain flatter and entertain the Kochs and AFP today. Touré has more to back up his argument after this performance.

The lawyer for one of the women who accused Cain of sexual harassment is set to make another statement Friday afternoon, and trust the media to pay more attention to the sex scandal than the campaign finance charges. Cain's ties to the Kochs, however, are proven and verified by the candidate. I don't expect GOP primary voters to care much about that, but the media should.