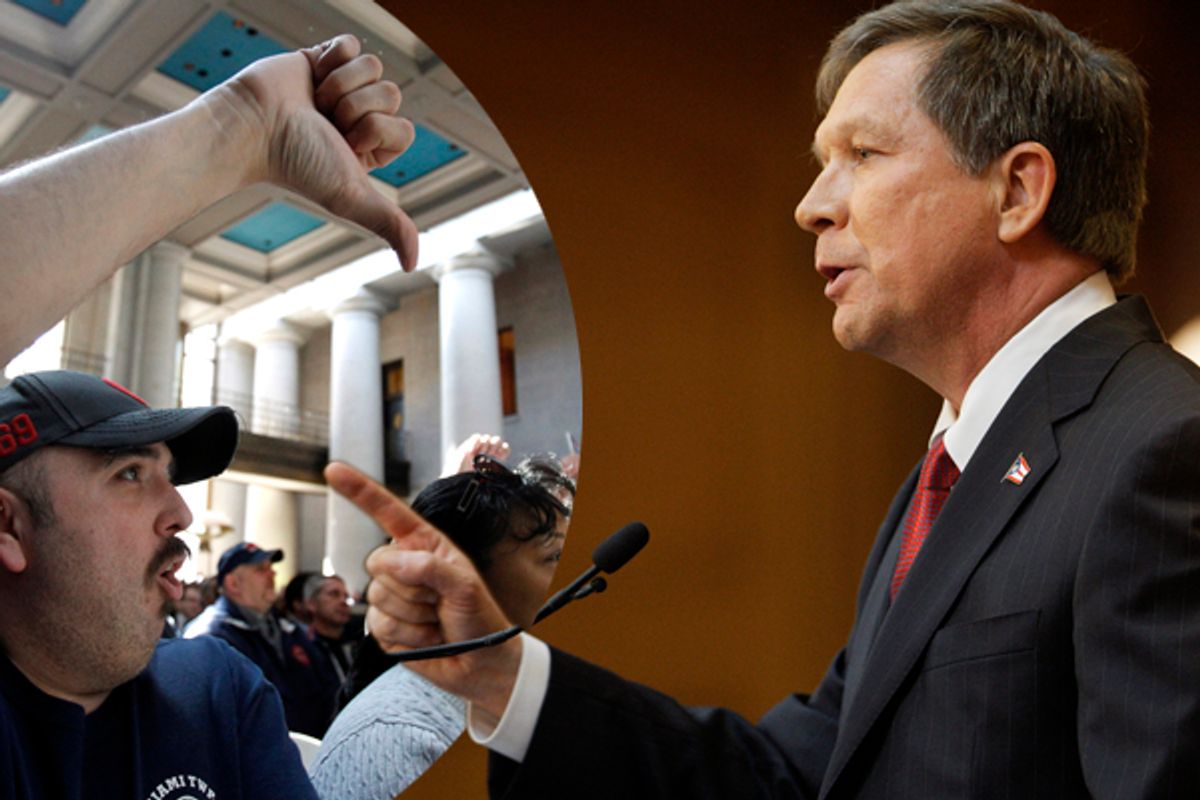 On Tuesday, Ohio voters will decide whether to repeal legislation passed by Republicans in March that would severely restrict collective bargaining rights for hundreds of thousands of public employees in the state.

Unlike in Wisconsin, where unions lost a similar battle earlier this year, the fight over Senate Bill 5 in Ohio is unfolding very differently. First, progressive groups forced a referendum on the law with a massive signature drive.

For an update on the fight over Senate Bill 5, I spoke to Joe Vardon, a public affairs reporter at the Columbus Dispatch who has been covering the story.

So what does this bill do?

What everyone can agree on is that the bill greatly limits collective bargaining for about 360,000 public employees in the state. It reduces what can be bargained for and completely changes how things are bargained and how disputes are settled at the bargaining table.

The implications of this are really what's at the heart of the argument here. The people who are for it say that very simply this bill restores fairness to the average taxpayer and helps local governments control costs. Those who are opposed say that this bill is unfair and creates safety problems. They argue that the bill prohibits negotiations on mandatory staffing levels, which, they argue, could lead to situations where there aren't enough police or firefighters on the job.

How did we end up having a referendum over this bill and what are the polls saying?

We have a Republican controlled House and Senate and a Republican governor. Senate Bill 5 was passed and signed in March. There was immediate and fierce opposition to the bill.  A coalition of various labor groups and the Ohio Democratic Party collected a record number of signatures to place the bill on the ballot in a referendum.

Quinnipiac's latest poll has Issue 2 down by 25 points. The same poll the previous month had Issue 2 down by just 13 points. So it would appear that Senate Bill 5 is heading for repeal.

What sort of campaign is labor running that's making it so successful?

You really have to start with the money. The labor side has raised more than $30 million. It has momentum going for so long because it had to start by collecting signatures to put the issue on the ballot to begin with. To get those signatures, it had to really amass a wide network of volunteers. Many of those volunteers stayed on once it was on the ballot and time to campaign for repeal of the bill itself. With that money and volunteer base and momentum, the labor coalition has been able to set up an expansive network of field offices and operations and has really focused on direct voter contact for months: door knocking, lots of phone banks, et cetera. The media face of its campaign has by and large been firefighters, police officers and teachers.

There's a stark contrast between how the two sides are running their campaigns. We Are Ohio, the labor group, is sticking to public workers and not using the traditional tactic of having politicians out front. The primary pitchman for the pro-Issue 2 side is the governor, John Kasich. He's been crisscrossing the state and has been the featured speaker at seemingly dozens of traditional political rallies

I've read that the pro-Issue 2 side is spending a couple million dollars on ads in the final days of the campaign. Where is that coming from?

It's harder to track the money for the pro-Issue 2 side because the official group defending the bill is a nonprofit, Building a Better Ohio, that does not have to disclose donor information. They voluntarily released a list of donors to its effort, but there were no monetary amounts or dates. They are also getting help in ads and direct mailers from outside groups like Citizens United, the Republican Governors Association and Tea Party groups. But that money is also hard to track because those groups don't necessarily have to say what they're giving or when or to whom.

Building a Better Ohio has only raised in the ballpark of $7.6 million, but the total cash amount going to support Issue 2 is larger than that. It's probably much, much less than what the unions are spending, but it's hard to say by how much.

How is the issue playing in presidential politics?

We've got a couple of the outside groups -- Citizens United and FreedomWorks, which is a Washington-based Tea Party group -- on the record saying that "the reason we're involved in Issue 2 is that we think it's a precursor to the 2012 election in Ohio." If they can somehow help Republicans win an upset here or at the very least make a dent in public opinion, they see that as a step in the right direction to defeating President Obama here next year.

The unions are less vocal about this. But the fact remains that they have this huge network with all these field operations set up. You can argue that the logical transition would be that many of those operations would just be folded into Obama's operation here next year. But that connection cannot be officially drawn yet.