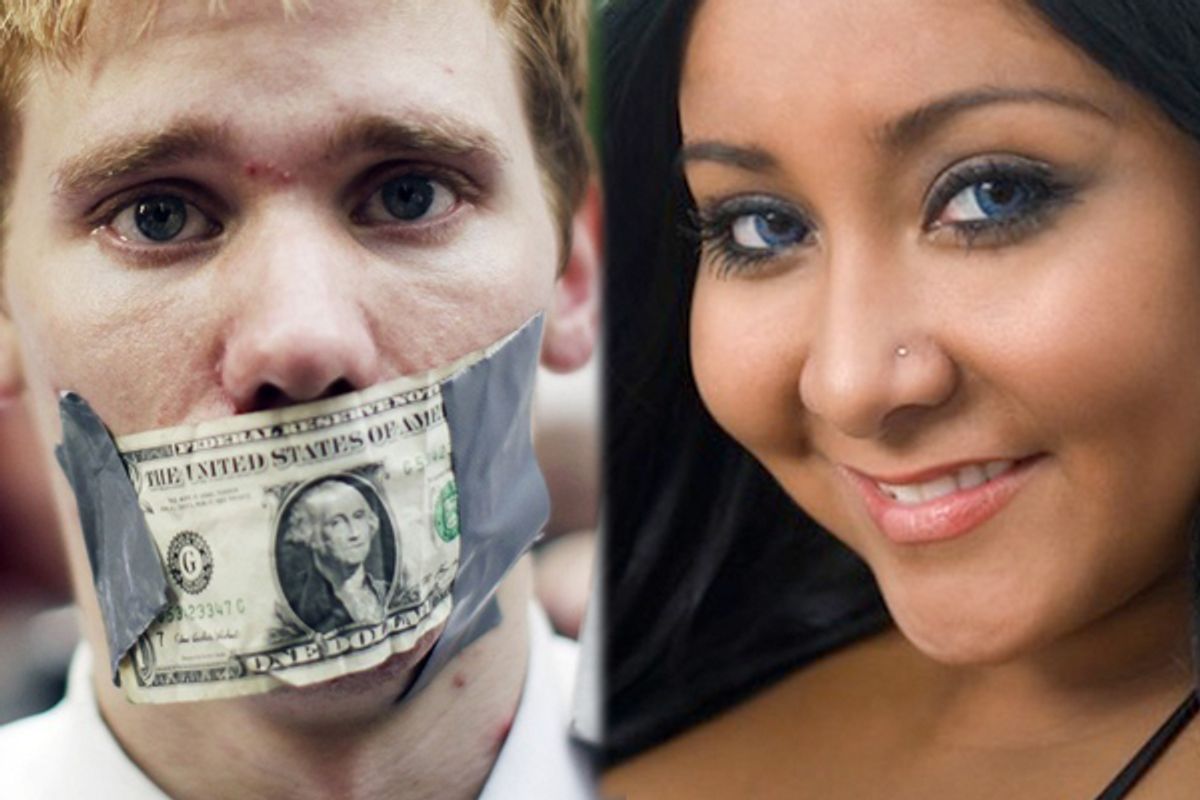 Back in August, MTV celebrated its 30th anniversary of marketing youth culture to advertisers under the guise of covering great music.

There is no golden age of MTV, although a new oral history called “I Want My MTV” at least argues that there were better times to watch -- namely, during its first 10 years. But if you were to identify the true height of the network’s influence, you might well point to the early 1990s. It wasn’t just the time of “Smells Like Teen Spirit” -- it was Rock the Vote, Choose or Lose, Boxers or Briefs. Presidential candidates needed to sit down with Tabitha Soren, and through town hall meetings, a youth agenda emerged during the 1992 campaign, just as Gen X graduated into the first Bush recession.

Even then, however, MTV really wanted to sell “influencers” to advertisers. In the New York Times business section and other places they didn't think their audience looked, MTV ran a picture of an alternaguy with cool clunky shoes and the tagline: "Buy this 24-year-old and get all his friends absolutely free."

Today, any network that even purports to reach young people, even if only to sell them back to large corporations, needs to have its cameras in Zuccotti Park, as the Occupy Wall Street demonstrations have galvanized students and recent college graduates as no political movement has in years -- at least since Obama’s presidential campaign. It’s easy to imagine '90s-era MTV setting up a stage for performers -- the Beastie Boys, right? -- and broadcasting nightly John Norris updates before “Alternative Nation.”

Today’s MTV? Well, about a month after the park filled with protesters, the casting agency behind “The Real World” placed a Craiglist ad looking for applicants for a new season set at Occupy Wall Street. It had to be a joke, right? It was not. “The Real World 27” is moving forward, and kids are going to get real.

MTV is eager to cover Occupy Wall Street; it just doesn’t know how, at least not in any substantial or meaningful way. MTV News’ “True Life: I’m Occupying Wall Street” debuts today, following a protester named Bryan who works on the sanitation team and fights to keep the city from evicting the occupiers. And as part of its O Music Awards -- which have noting to do with Oprah -- MTV plans to bestow former Rage Against the Machine guitarist Tom Morello with a special award for Best #Occupy Wall Street Performance, for his strolling rendition of “This Fabled City.”

This is how MTV covers OWS – with a reality-esque documentary and an awards show. Which is fitting, since that’s about the only thing the network does anymore. It reveals a network that is clueless about the principles that inspired the movement and — perhaps even worse — exploitive in the most blatantly corporate sense of the word. Its first response to an important and possibly defining moment was to retrofit OWS to a format that’s easily as old as many of the demonstrators themselves. How long before we see JWoww and The Situation carrying picket signs? Could there be a “Teen Mom” at the protests?

Ever since the synthy strains of "Video Killed the Radio Star" introduced the network in 1981 --  it’s been easy sport to bash the channel for its vapidity and youthmongering. MTV is like "Saturday Night Live" -- you can't kill it or embarrass it, no matter how bad it gets.

It’s all too easy to get dewy-eyed over the MTV of yore, and “I Want My MTV,” the compulsively readable oral history by Craig Marks and Rob Tannenbaum, makes it possible even to wax nostalgic over a channel that had Journey and REO Speedwagon in heavy rotation, and made us stay up until after midnight on Sunday to watch anything good on "120 Minutes."

As “I Want My MTV” makes clear, MTV has always had a difficult time untangling its cultural and entrepreneurial motivations, and those problems have only grown more troublesome over the years. Even during the '90s, when the network strove for the legitimacy of a mainstream news agency, its programming department was quick to pick up on alternative rock, but even quicker to laud latecomers like Stone Temple Pilots and Silverchair. If it had a hand in defining alternative as a pop cultural movement, the network had an even bigger hand in commodifying and defanging it. No wonder OWS supporters are suspicious.

To quote a star from MTV’s early days: “Same as it ever was.” But when people criticize MTV, it's always with the same line -- they stopped playing music years ago. That criticism is older than Rebecca Black, who may be the only video star MTV didn’t create.

No, the problem with MTV isn't the lack of videos. It's that 15 years ago, with the growth of reality TV and the Internet-fueled splintering of youth culture into hundreds of tiny niches, MTV made the conscious business decision to hold its audience together by sinking to the lowest common denominator. And it worked. If MTV wanted to define "cultural cesspool" in a time when that's a legitimate challenge, with all the bad girls and bachelorettes and Kardashians out there, they've succeeded wildly.

The network’s shows have grown increasingly pandering and exploitive, pushing the boundaries of taste with series that glorify teen pregnancy (“Sixteen and Pregnant”), teen sex (“Skins,” a remake of a British show) and cultural stereotyping (“Jersey Shore”). Someplace, Kurt Loder is rolling in his grave because he can't actually be alive to see this.

Trash entertainment has a place in pop culture, of course. But unlike the works of lowbrow auteurs like John Waters or Russ Meyers -- or even Chuck Lorre -- there is no larger social mission here, no perspective, no integrity. There aren’t even any cheap thrills. Watching the cast of “Jersey Shore” get drunk and say stupid shit again is losing its novelty, and the series’ season finale saw a precipitous drop in viewers. And when there's a legitimate youth movement in the street, where's MTV? Catching up.

But one promising sign might be the revival of “Beavis and Butt-head,” Mike Judge’s animated series about too doofuses whose love of fire, boobs and rock somehow allows them to comment incisively on pop culture. For most of a typical episode, they simply sit on the couch and make fun of music videos. These days, “Beavis and Butt-head” skewers MTV programming like “Jersey Shore” and “True Life.”

Beavis and Butthead don’t hold back, either: These segments are hilarious, smart and vicious. Does the show signal a sea change in the network’s understanding of its own product or, as usual, is MTV jumping belatedly on the MTV-bashing bandwagon? At the very least, it unites so many of us in our hatred of what MTV has become.