The evolution of deceit

New discoveries show that fibs and self-deception are central to our evolutionary strategy. An expert explains 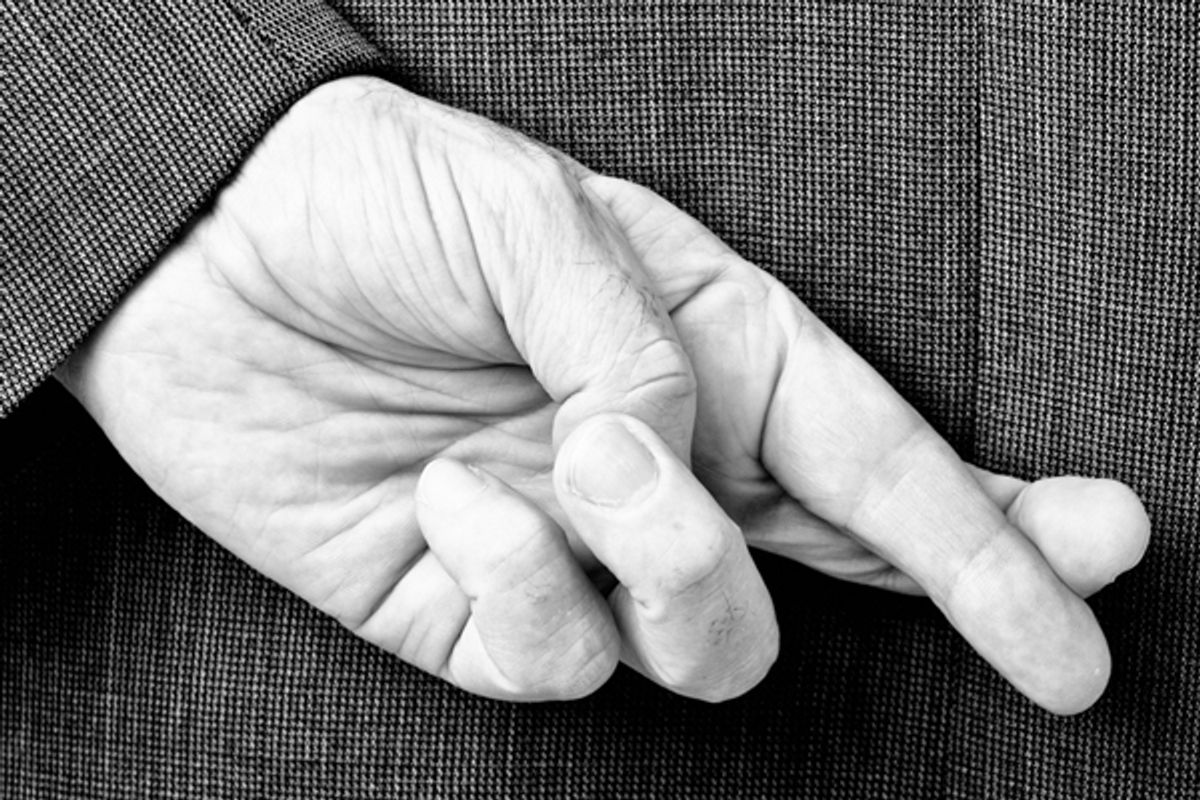 Not long ago, a young man drove onto Robert Trivers' Jamaica property. Suspicious of the man's sudden appearance, and convinced he was intent on either extorting money from him or robbing him, Trivers, a Rutgers professor, confronted him about his identity. His first name, the man said, was Steve. "What's your last name?" Trivers asked. Trivers, one of the world's leading evolutionary theorists and an expert on deceit, was checking for a behavioral sign that the man was lying, like an absence of hand gestures or longer pauses between words, which indicate "higher cognitive load."  The man paused. And Trivers knew immediately he was right: As it turns out, the man's real name was Omar.

Trivers, a professor of anthropology and biological sciences, probably knows more about the mechanics and meaning of deception than almost anybody else in the world, and his new book, "The Folly of Fools," covers pretty much anything you'd want to know about the topic. The book is an attempt to connect the mechanics of deceit to evolutionary science, and takes a broad survey of the areas in which the two overlap, including animal predation, parenting and people's sex lives. High parasite load, he discovers, for example, is correlated with heightened levels of self-deception, and high levels of deceit, he finds, are closely tied to bad health. Expansive, smart and deep, the book -- a relentlessly fascinating and entertaining read -- will utterly change the way you think about lying.

Salon spoke to Trivers over the phone about Arnold Schwarzenegger, "don't ask, don't tell" and the connection between staying in the closet and HIV.

When you talk about deceit and self-deception what exactly are you talking about?

Well, in verbal terms it would be lying to others and lying to yourself. But deception is much deeper because it doesn’t require language and it’s found in a whole series of other animals.

So what does that have to do with evolution?

If you take a relationship between a man and a woman, the man can be carrying on an affair on the side and it can produce a child. Arnold Schwarzenegger did not tell his wife that that cute little boy that he loved so much was actually his own, by the maid. Maria discovered it when the child was 12 years old. So you can get a reproductive benefit by deception as long as you’re not detected.

Self-deception, by contrast, has been a long problem in human thought. You find it in religion. Minds like Marx and Freud have each claimed to have a theory of self-deception, none of which have stood up. Adam Smith, the economist, wrote a whole book called “Self Deception.” George Orwell obviously had deep insight into certain kinds of self-deception, but nobody has had anything approaching a coherent scientific theory as to why on earth we would lie to ourselves. Working on parent-offspring conflict, I suddenly had this flash of insight: “Ah! If self-deception improves your ability to deceive others, then you would have a strong selective force to get it into your consciousness."

So we are evolutionarily predisposed to lie to others and ourselves. How does deception play itself out in the animal kingdom?

Let me give you an example. If you’re trying to pick out a moth against the bark of a tree and it has evolved to resemble the bark of the tree more and more precisely, then it becomes a more and more difficult cognitive problem for you to solve. So your cognitive powers of detection, of seeing things, of being able to discriminate very minor differences, those are all being improved. I deliberately use that example because the deceiver is using morphology, not behavior.

Right, so by developing a more deceptive body, the moth is creating an incentive for you to become smarter -- and therefore you're more likely to evolve a more sophisticated brain.

Nobody has worked out a general principle of deception in creatures. Deception, however, seems to be a file against which mental intellectual powers have been sharpened. When it comes to behavior, there is a strong correlation in primates -- monkeys and apes -- between the relative size of their neocortex and how often they are seen to deceive in nature. The brighter you are, the more complex and devious your deceptions can be.

In children, for example, there’s a strong positive correlation between having higher intelligence at age 4 and more deception. Smart children lie more than slow children. A child that is disabled to the point of lacking verbiage, for example, may deceive you by lunging in one direction and then grabbing something on the other side of you. But they are not going to show sophisticated verbal deceptions.

At what point do babies start deceiving their parents?

Fake crying, where the child is able to turn it off and turn it right back on depending on if the audience is there, starts at 6 months. I have a video I use in my lecture where this child is rolling on the ground bawling in front of his mom and their dogs and your heart goes out to him. Then the mother and the dogs leave the room and the child stops crying, gets back up on his feet, walks toward them. As soon as he sees them, he immediately flings himself on the ground and starts bawling again. He’s just trying to manipulate Mom.

And, as you point out in the book, children get better at deceiving the older they get.

They start telling so-called white lies at about age 5 and at age 2 or younger they can start pretending that a punishment is not something they care about, when they clearly do. The more cognitively talented the child becomes in general, the more subtle and sophisticated its deception becomes.

Like hypnosis, there needs to be a third party involved. It’s very hard to talk yourself into a placebo effect. You've got to have someone with a stethoscope and a white coat and acting like a doctor to get the placebo effect going. There’s something very important that’s not emphasized in the literature on placebo effect -- there’s a lot of variability. About a third of us don’t show placebo effect, a third of us show a really strong one, and a third of us are kind of intermediate. The same thing is true of hypnosis.

I recently saw a guy in Jamaica to whom I gave some pills to calm him down because he’d just gone through a minor breakdown. I gave him a particular pill by the recommendation of a psychiatrist. They were pink pills -- and they had a positive effect. When I came back to give him his refill, I had my own version of the pill that was identical, but was a white pill. I called him two days later and he openly sounded depressed. He says, “The other pill works better.” He was so happy when I showed up with a bunch of pink pills and took back the five remaining white ones.

You point out that women think very differently about sexual deceit depending on where they are in their cycle of ovulation. How so?

If a woman isn't on the pill, you get all of these differences showing up right around the time of ovulation, which relate to the fact that that’s her time to get "different genes." There are things, for example, called major histocompatability loci [on your genes] that are involved in the fights against parasites. They are highly variable. Most partners [in sexual partnerships] don’t match but some match on one [locus], some match on two, and in some cases they match on all three. Since women don’t want children who have [the same alleles or genetic code at the same locus] the more the woman matches with you the less she is going to want your genes for her children.

What they’ve shown is, at the time of ovulation, if you match in one or more of these there’s more verbally coerced sex -- “Come on, you had a headache last week" -- and there’s a greater tendency for her to employ fantasy to get off. She thinks about a past lover or somebody she’s attracted to while you are having sex.

Right. So during that period of ovulation, she's less attracted to her husband or boyfriend, and more likely to think about having sex with someone else.

There's an irony because we have pretty good evidence that women are at their most attractive at the time of ovulation. Their waist-to-hip ratios are slightly smaller, so they are more curvaceous. They are somewhat more symmetrical and the coloration of their face is better. The time at which she is most attractive to you is the time at which she’s least attracted to you. And the men are impervious to this.

I know a joke, although women in this country don’t like it. If women are so good at multitasking, how come they can’t have sex and a headache at the same time? I told this story to a Jamaican woman and she starts explaining to me, “No, we’re using the headache to avoid sex.” And I say, “That’s the whole joke!”

I don't think I've ever encountered that problem between gay men.

How old are you, Thomas?

Ha! Thanks, but speaking of gayness, you make some fascinating connections between being in the closet and the strength of your immune system in the book.

Homosexual men have been very intensively studied in the U.S. for a number of years in connection with HIV and AIDS. You suffer more from cancer if you are in the closet. Bronchitis ain’t deadly, but it’s certainly annoying -- and once more you suffer more from it if you're in the closet. It's a graded phenomenon -- so for every extra degree of outness there’s an improvement [in health]. It also shows up when you measure immune parameters in saliva that generally correlates with immune strength.

And they had a study showing the same thing I just mentioned for HIV positive men. What is your guess, Thomas? Do you think people are more likely to engage in unprotected sex if you are in the closet or if you’re out of the closet.

When they're in the closet.

Because I think a lot of closeted men think that "only gay men" have protected sex and that if they're not gay, they don’t need to.

Now the reason that’s relevant to HIV is this: If you've got two strains of HIV inside you, the two parasites compete for dominance. They each want to be the one replicating and passed on in your sperm. That means faster, in theory, progression into AIDS and 20 percent earlier death. So there’s an overwhelming relationship between being in the closet and having a compromised immune system.

Which, as you point out in the book, is a very strong argument against "don't ask, don't tell."

"Don’t ask, don’t tell" was an immunological disaster. But that's typical of Bill Clinton. He always went in for verbalistic solutions.