A popular leftist has delivered for the middle class? She must be doing something wrong 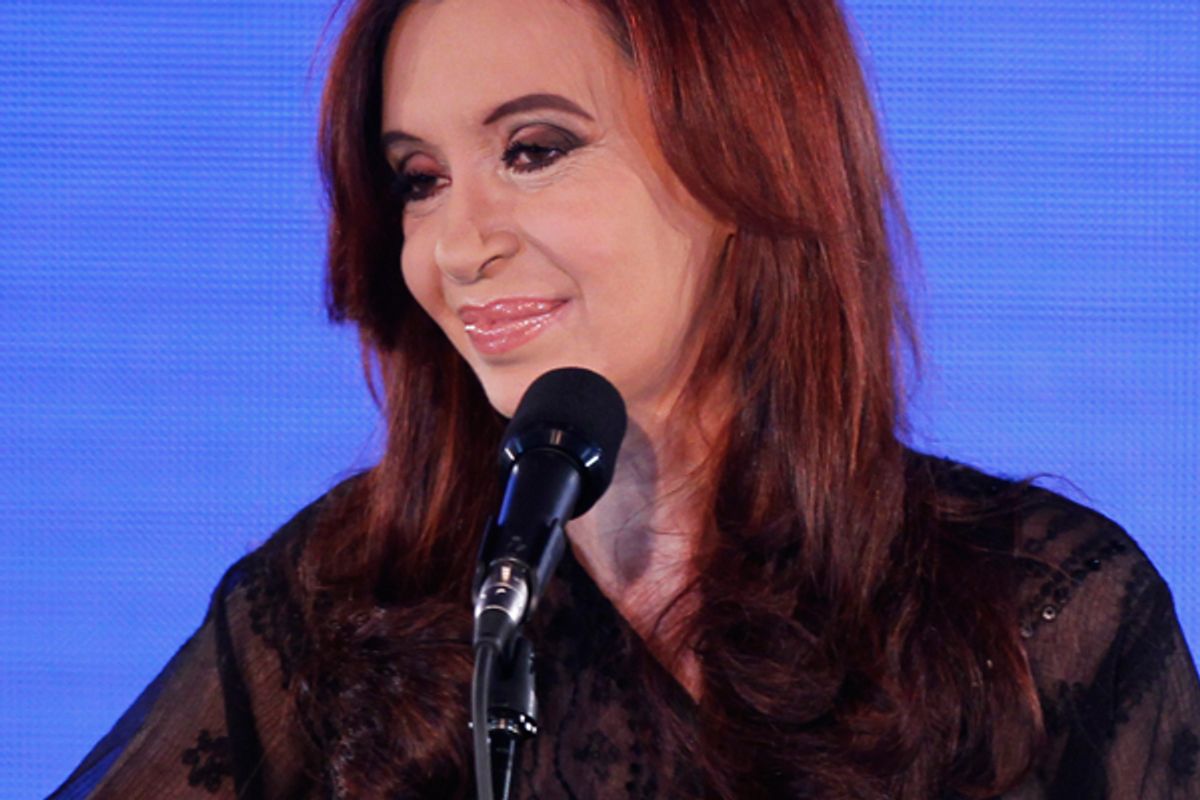 When Argentina’s president, Cristina Fernández de Kirchner, was reelected two weeks ago by the largest margin of any leader since the return of democracy in 1983, even her bitterest opponents had to admit that she’d done something right. Clarín, Buenos Aires’ highest-circulation daily and a strong contender for the title of Kirchner's enemy No. 1, acknowledged that the president had earned her victory by creating jobs and prosperity. Mauricio Macri, the conservative mayor of Buenos Aires, congratulated Fernández and told reporters, “If things go well for the president, things go well for us.”

But on the pages of America’s leading newspapers, the tone was strikingly less conciliatory. Despite her evident success, the New York Times dedicated itself to  cataloging Fernandéz's failings before concluding, in the voice of one source, that Argentine economic growth will soon slow and "there will be a political reckoning.”  The editorial board of the Washington Post echoed this prediction, warning that Fernández might turn to authoritarian measures to preserve her power and suggesting, "so far the signs are not good."

The U.S. press has been forecasting imminent disaster since Fernández’s late husband and predecessor, Néstor Kirchner, assumed office in 2003, promising to prioritize shared recovery over foreign lenders left in the cold by the country’s 2002 sovereign debt default. The couple’s unorthodox economic policies have done what Washington experts believed impossible. Kirchner's way has fostered breakneck growth, dramatically reduced poverty rates and secured "kirchnerismo" three presidential terms. Yet U.S. media outlets have downplayed these achievements in favor of attention to the Kirchners’ perceived instability at home and unpopularity with creditors abroad.

It’s a narrative so ingrained in the DNA of Washington that not even a landslide election could wipe it out.  This isn’t to say that all of the U.S. coverage has been slanted. Michael Warren of Associated Press reported the reactions of slum dwellers while the Christian Science Monitor called Fernández' victory “historic.” The Monitor explained the substance of the president’s economic program itself rather than just its drawbacks.

The Post editors saw no need for such niceties. They attributed Fernández’ victory to “familiar populist policies that produced a burst of growth” and to “dressing in black and benefiting from public sympathy” over her husband’s death in October 2010. Predicting that growth will slow next year, they offered the president a stark choice: “adopt responsible but unpopular policies to avoid another bust” (in other words, toe the line of the Washington Consensus on economic policymaking) or “redouble her populism” and face a “reckoning.”

The Post editor cited manipulation of official inflation figures and attacks on media critics while ignoring that Argentine prosperity is more widely shared than at any point in the past 35 years. “So far the signs are not good,” they intone.

Lying about inflation and targeting dissent are indeed kirchnerismo’s cardinal sins, but the Post’s political calculus is off the mark. Inflation itself isn’t a political crisis as long as salary increases keep pace -- and on this front, Fernández has consistently delivered. The president should indeed “allow responsible critical voices in the media and accurate economic reporting” -- but if her failure to do so is all that Post readers know about Fernández, they can be forgiven for writing her off.

The Times’ takedown came not from the editorial board but from Southern Cone bureau chief Alexei Barrionuevo. Rather than condemn Fernández in his own voice, Barrionuevo cites a parade of analysts, all with negative things to say. The first one he quotes claimed that “this election seemed to defy the normal rules of politics,” presumably because of the government’s “corruption and cronyism.” Yet it would seem that voters’ willingness to overlook allegations corruption at a time of robust economic expansion and real wage growth follows rather than challenges “the normal rules” of politics.

What annoys the pundits most is Argentina’s failure to embrace a set of macroeconomic policies that favor foreign direct investment. While it is true that international investment fell by 30 percent in the first half of 2011, this isn’t an accidental byproduct of irresponsible policies; it’s the result of a deliberate campaign to deprioritize foreign debts and in favor of more stimulative social spending. “Foreign investment,” after all, is inherently neither good nor bad, yet Barrionuevo treats it as an obvious, if unjustified, boon.

Barrionuevo ended his report with a quote from the most incendiary analyst of the lot: “When the money runs out” as the economy slows, “there will be a political reckoning.”

This may be true. Argentina’s continued success depends on commodity prices remaining high and on strong demand from China and Brazil. As Barrionuevo himself reports, “economists say those factors may soon be undermined by the global economic downturn."  And blaming Fernández for that development is like blaming Obama for the European debt crisis.

The end of the Washington narrative

The narrative that emerges from these Post and Times pieces -- and from similar accounts from Reuters, the Wall Street Journal, the Economist and the Financial Times -- contends that Fernández’ victory doesn’t matter much because the successes of kirchnerismo ring hollow, and that it’s only a matter of time before all hell breaks loose. This isn’t wrong, per se (who, after all, can know the future?), but it misrepresents the reality of Argentina.

What these American news outlets don’t get -- and what kirchnerismo understands perfectly -- is that to many Argentines, the Post’s “responsible but unpopular policies” are code for a return to the orthodox, finance-first economics that hacked away at the middle class for a quarter-century before culminating in crisis in 2001 .The neoliberal revolution began in earnest in 1976, when a heinous military dictatorship seized control of Argentina. In addition to "disappearing” up to 30,000 of its opponents, this regime crippled manufacturing, set off chronic hyperinflation, and swelled the country’s public debt burden before collapsing in 1983.

The fragile democracy that followed couldn't bring the economy under control. Inflation peaked at nearly 5,000 percent in 1989 and ended only when President Carlos Menem pegged the Argentine peso to the dollar in 1991. This “Convertibility” scheme was but one plank in a Washington Consensus-approved platform of privatization and deregulation. Menem’s ‘90s were flush times for the wealthy, but for the less fortunate they were marked by industrial decline, limits to collective bargaining rights and sharp increases in unemployment and inequality.

More troublingly, Convertibility left Argentine policymakers with no monetary tools to arrest the country’s slide into recession in the late '90s. The situation reached a crisis point in 2001-02, when riots forced the resignation of Menem’s successor and Argentina cycled through five presidents in two weeks before ending Convertibility and declaring the largest sovereign default in history. In a country that had long conceived of itself as middle-class, more than half the population was suddenly thrust into poverty. More than a quarter lacked secure access to food.

It was out of this chaos that Néstor Kirchner, an unknown governor of Argentina’s second-least-populous province, emerged to claim the presidency in 2003, promising to confront ''groups and sectors of economic power that benefited from unacceptable privileges during the past decade.” His budget stressed to the breaking point, Kirchner repaid the IMF, but he loudly ignored its demands for austerity and took a hard line renegotiating Argentina’s remaining debt. Western opinion leaders scolded, and global credit markets refused to lend.

Kirchner cast these critics aside, pursuing his own heterodox recovery. He boosted government spending, subsidized fuel and transportation, and expanded manufacturing and exports. He distanced himself from the United State and kept the peso cheap to increase trade with other developing countries. Helped by rising commodity prices -- especially for soy, the country’s new cash crop -- Argentina experienced the sort of growth that even Tim Pawlenty wouldn’t dare to promise: nearly 9 percent a year between 2003 and 2007.

In a ploy to avoid the constitution’s two-term limit, Kirchner decided to step aside in 2007 so that his wife could run for the presidency in his stead. The boom times carried her to victory. Far from the political novice many of her critics portray, the former three-term senator has proven an adaptable leader. Two years ago, amid a temporary economic slowdown, kirchnerismo suffered a stark midterm defeat. In response -- and especially since her husband’s unexpected death -- Fernández moderated her combative tone, doubled down on her rhetoric of inclusion and strengthened her alliances, waltzing to easy reelection last week.

The dark side of kirchnerismo

There is a dark side to kirchnerismo. In their attacks on opponents and their assault on critical media, the two leaders have displayed a disturbing intolerance of dissent. This tendency is evident in their approach to inflation. Since 2007, the government has pressured the official statistics agency to lowball official figures, and it has recently begun to fine economists who report more reasonable rates of inflation. Combined with a broad overreliance on presidential decrees, these domineering behaviors have undermined countervailing sources of power in a country long plagued by institutional weakness.

Kirchner can also claim victories. After nearly two decades of impunity, the former dictators of the 1970s and 1980s have been brought to trial. Gay marriage has been legalized. Rising inflation has been matched by across-the-board salary increases, and social spending has increased dramatically.

The results of these efforts have been impressive, especially in terms of equality.  Unemployment has dropped by half since 2003. After decades of widening ineqality, the income gap that separates the wealthy from the middle class and the poor is finally diminishing. The percentage of the population in extreme poverty has declined from nearly 20 percent in 2002 to an astounding 2.4 percent in 2009. Meanwhile the income share of the top decile has fallen below 34 percent from its 2002 high-water mark of nearly 40 percent. Argentina may not yet have regained its standing in the eyes of the world’s investment banks, but it has recovered its middle class.

Given outcomes like these, it’s no surprise that Fernández’s opponents couldn’t gain much traction in this year’s campaign. And given kirchnerismo’s lack of regard for the creditors and advisors of the West, it also makes sense that the U.S. press establishment would be cold in its embrace. Thumbing your nose at the wise men of global capitalism, it would seem, is an offense not easily overlooked by the brightest beacons of our press establishment.

But maybe, just maybe, the United States has something to learn from Argentina’s recent experiment. Late last month at the G-20 summit in Cannes, France, Fernández denounced what she characterized as the “anarcho-capitalism” of a global financial system dominated by underregulated investors and demanded a “return to serious capitalism, where the priority is consumption, creating jobs, and aid packages that are meant to help the real economy,” not well-connected banks.

Imperfect a messenger as Fernández may be, it’s a message with a lot of appeal back home in Argentina. And given the state of the world economy today, it’s probably even true.

Just don’t expect to hear it from the Washington Post or the New York Times.

Paul Katz is a freelance writer based in Buenos Aires, Argentina. He is on Twitter @paulryankatz and blogs at comoelpulpo.wordpress.com.