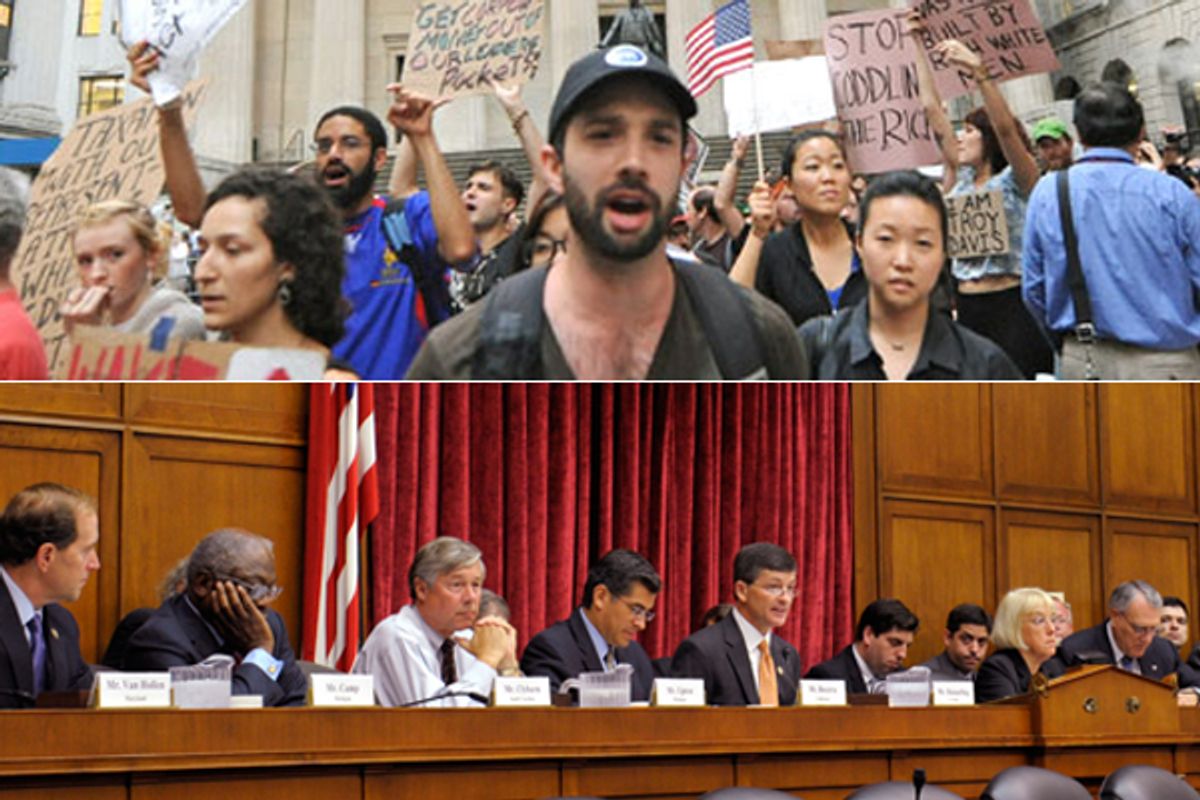 “I have great respect for each of you individually, but collectively I’m worried you’re going to fail — fail the country,” former White House chief of staff Erskine Bowles, a co-chairman of President Obama’s fiscal commission, sternly told the congressional supercommittee last week. Elite pressure is building on the committee to reach for a “grand bargain” to cut trillions out of the budget deficits over the next 10 years.  Last week 100 House members, including 40 Republicans, dispatched a letter urging “a big, grand bargain" with "all options" -- code for tax hikes -- "on the table.”

In fact, the best service the supercommittee could do for the country is to fail.  It is charged with a task that can only weaken an already faltering economy. The committee is like a gang of delinquents armed with grenades set to go off, but struggling to build a really big bomb that could do even greater damage.  We’d prefer the grenades get defused, but we truly don’t want them to put together the bomb.

The supercommittee, the misbegotten offspring of the summer's debt ceiling deal, is charged with reducing the deficit by a minimum of $1.2 trillion over 10 years by cutting spending or raising taxes.  It must report before Thanksgiving and any report must be voted on before Christmas, with no amendments, no filibuster, no extended debate, majority rule.  If it fails, then $1.2 trillion in automatic cuts in discretionary spending, split between domestic and Pentagon budgets, kick in. It provides a choice,  as Newt Gringrich put it, between shooting yourself  in the head and cutting off your right leg.

This choice is posed as the country is plagued with a faltering recovery, and severe mass unemployment -- 25 million people in need of full-time work.  Having reduced interest rates to near zero, Federal Reserve Chairman Ben Bernanke is pleading for action from Congress to boost the economy. “It would be helpful if we could get assistance from some other parts of the government to work with us to help create more jobs," he said.   That would require spending money or cutting taxes –- exactly the reverse of the supercommittee’s mission.

As Rep. Jan Schakowksy put it, the supercommittee is mired in “yesterday’s conversation, frankly, the whole issue of the obsession with cuts and debt reduction,” when instead the Congress must be focused on jobs.

In fact, the economy already faces a severe hit from the folly of the deficit hawks.  Republicans  have obstructed every portion of the president’s modest job plan.  Spending from the recovery act is ending.  The first of the enforced spending cuts from the deficit deal are kicking in.  Extended unemployment insurance is due to expire at the end of the year, as is the payroll tax cut.  JP Morgan Chief U.S. Economist Michael Feroli estimates those measures will cut GDP by about 1.7 percent in 2012, virtually driving the U.S. into recession. With companies sitting on $2 trillion in profits looking for customers, there is no indication the private sector will replace the jobs or demand.

The only agreement that would make any sense coming out of the supercommittee would start with a big jobs agenda.  A massive initiative to rebuild America could take advantage of the opportunity offered by near zero interest rates to renovate our decrepit infrastructure and employ idled construction workers.  Direct public service jobs could ensure that young people graduating from high school or college or veterans returning from the war get the discipline and sense of self-worth provided by work, rather than the despair and shame of unemployment. We should be expanding our investment in education from pre-K to affordable college, not slashing it.

And, in a sensible world, the trigger for turning to deficit reduction would not be an arbitrary date like January 2013, but linked to when people are going back to work.  When unemployment gets back down to 5 percent or so and the economy is moving, then will be the time for sensible deficit reduction.

The benefits of failure

Republicans, of course, are not about to agree to a jobs program as part of any committee recommendations.  Given that, the best option, contrary to the clamor of the austerity caucus, is to not agree on anything at all.

With its expedited vote powers, and the elite pressure for action, any agreement by the committee is likely to pass.  But an agreement, particularly a “grand bargain” entailing $3 trillion or $4 trillion in cuts over 10 years, will assault not only the recovery but also the nation’s decency.  Led by the inescapable Max Baucus – whose destructive meanderings on healthcare reform should have led Democrats to lock him in an attic somewhere -- committee Democrats recently floated a $3 trillion deficit reduction plan, offering cuts in Social Security payments (through a lower inflation adjustment) and in Medicare and Medicaid, in exchange for increases in tax revenues.

The Center for Budget and Policy Priorities noted that the deal offered Republicans was about 6-to-1 in spending cuts to tax hikes, and far to the right of even the Senate’s bipartisan gang of six proposals.  Inevitably, committee Republicans rejected the proposal out of hand, refusing to consider any tax increases or defense cuts, offering a smaller alternative plan of some $2.2 trillion, featuring deep cuts in Social Security and Medicare  and a token figure of $4 billion in tax cuts.

If this is success, failure looks more attractive.  If the committee fails to agree, automatic cuts kick in on the discretionary side of the budget -- $1.2 trillion over 10 years, split between the military budget and domestic programs beginning in 2013.  In the first year, $54 billion will be cut from each, or about 9 percent from core budgets.

Exempted from the domestic cuts are many of the core social programs the most vulnerable rely on: Social Security, Medicaid, veteran’s benefits, Pell grants, food stamps, children’s health (CHIP), and child nutrition.  Cuts in Medicare payments to providers are limited to a 2 percent cut in payments to providers.  The cuts in other programs -- public health, education, the environment, renewable energy, disease prevention, health research and more -- would be brutal.   But the programs for the poor and vulnerable are likely to fare better in event of failure, than in the event of a grand bargain.

The Defense Department would similarly face cuts of about 9 percent, which, added to the trimming already done in Pentagon projections, would cut nearly $1 trillion from the department’s 10-year budget.  This leads generals to fulminate about “catastrophic” and “doomsday” measures.  “We're talking hundreds of airplanes and thousands of people,” warned Air Force Chief of Staff Norton Swartz.  Defense Secretary Leon Panetta has vowed this “won’t happen on my watch.”

But coming to the ash end of two wars, cuts in the military are long overdue. In fact the reductions include savings on the wars that could easily amount to $700 billion or so over 10 years.  And the Pentagon’s core budget has doubled since 2001.  As the Project on Defense Alternatives report noted, the Pentagon would suffer a cut, in inflation-adjusted terms, from $5.99 trillion over 10 years to $5.18 trillion.  This would return it, in real dollars, all the way back to its FY-2007 budget, hardly unilateral disarmament.  We would still be spending on the military almost as much as the rest of the world combined

Once the economy gets going and people get back to work, any sensible deficit reduction plan would feature cuts in military spending.  We face no global military rival.  The Pentagon has used the threat posed by small bands of terrorists to justify sustaining Cold War weapons, an empire of bases, and interventions into the far corners of the world.  This perversely makes us less secure and less solvent.

The mother of all debates

The failure of the supercommittee is a progressive idea whose time has come. The automatic budget cuts required by failure don’t kick in until 2013.  That gives the economy a few more months to recover, although without positive action on jobs that won’t suffice to qualify as recovery.  And, of course, the cuts for either domestic or defense spending roll out over years.  They are easier to reverse or amend, for better and worse, than structural changes in Social Security. Already, Republicans led by Sen. John McCain are vowing to protect military spending, which would allow Senate Democrats to protect domestic spending.

Failure also sets up the mother of all debates, which the country needs to have. The Bush tax cuts are slated to expire at the end of 2012.  The debt ceiling will need to be raised once more.  The automatic cuts dictated by the debt ceiling agreement would be about to kick in.

Here, too, we face an ugly choice.  Instead of a supercommittee meeting in secret, armed with extraordinary powers to push through an agreement, we’ll face the perils of a lame duck Congress and possibly a lame duck president. But we will just have had an election in which these issues will be front and center.

Polls show that large majorities of Americans favor protecting Social Security, Medicare and Medicaid.  They support investment in education.  They support hiking taxes on the rich and making Wall Street pay.  They want the foreign wars ended and resources used here at home.  The United States can’t avoid making fundamental choices.  Better to make them a year from now, on the basis of the election results, not a secretive committee’s hasty pact, wired to pass quickly before the public understands the implications.  For the supercommittee, a little partisan gridlock is just what the country needs, and failure is the best option.

Robert Borosage is co-director of the Campaign for America's Future (www.ourfuture.org).