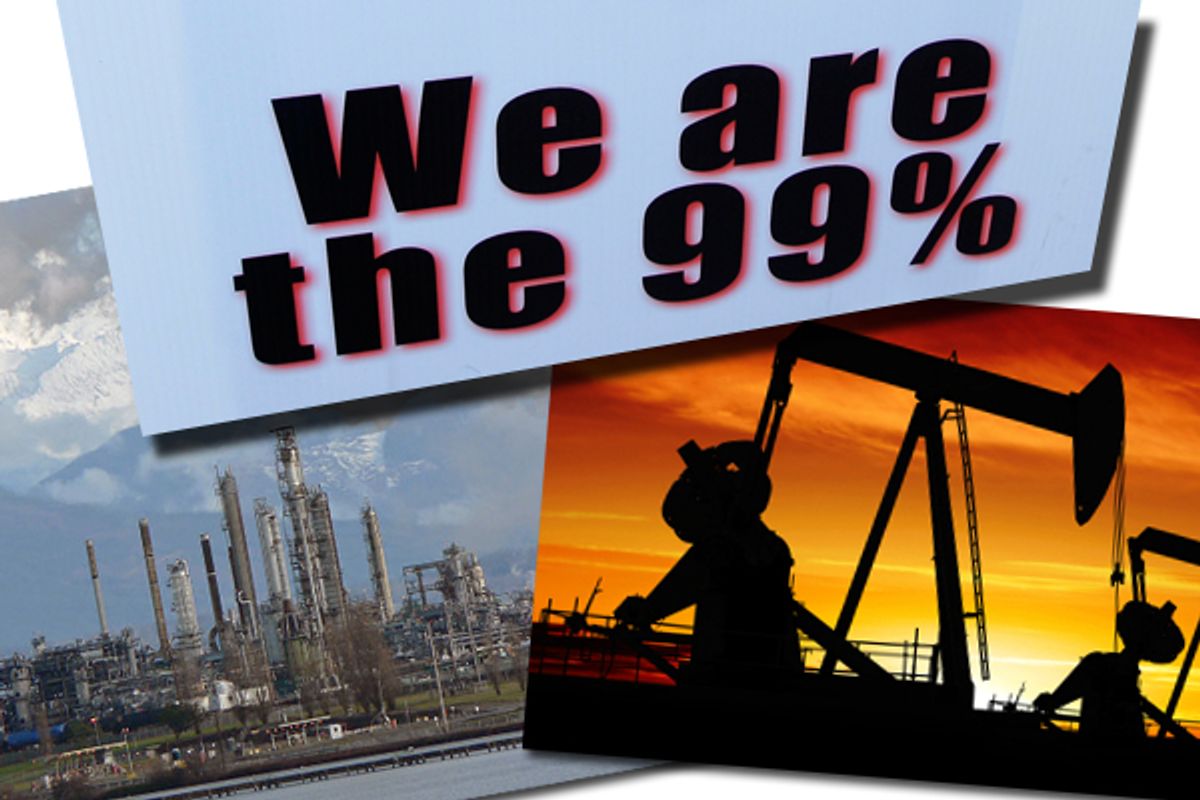 Occupy Wall Street is getting another lesson in the hazards of running an open-source movement.

Late last week, an association of construction unions partnered with the oil and gas industry to launch a campaign that uses the rhetoric of Occupy and the 99 percent to push for construction of the Keystone XL pipeline. That project, of course, is the subject of intense opposition by environmentalists who argue that it would be a disaster for climate change; thousands of protesters formed a human chain around the White House over the weekend to urge Obama to reject the pipeline proposal.

Many within the Occupy movement also oppose the Keystone project and are now taking steps to distance themselves from the new labor-backed pro-Keystone campaign.

The new campaign, funded by America's Building Trades Unions and the Oil & Natural Gas Industry Labor-Management Committee, launched late last week with ads in Capitol Hill newspapers, radio ads in markets along the proposed pipeline route, and a website, JobsForThe99.com. It was first reported by FireDogLake.

The campaign attacks celebrities who have opposed Keystone -- including Daryl Hannah and Danny Glover -- as elitists destroying desperately needed middle-class jobs with their misguided environmental activism.

"Hollywood’s elite 1% should stop flying to DC and speaking out against jobs that help the other 99% of America!" the campaign declares.

Building Trades Unions spokesman Tom Owens declined to specify how much money is being spent on the ads beyond that it's "a significant investment on our part." Some of that money is presumably also coming from the oil industry, which is well represented in the Alexandria, Virginia-based Oil & Natural Gas Industry Labor-Management Committee.

"The leadership of the unions behind this campaign have made a public alliance with the oil industry and Tea Party funders," the statement declares. "Big Oil and Tea Party billionaires are part of the 1% . The reference to the 99% is opportunistic and misleading. … We must dissociate from this attempt at co-optation by the 1% to preserve our movement as the 99%, and as definitive precedent to dissuade future attempts of co-optation."

Tim Woodcock, a co-founder of Occupy Wall Street's environmental solidarity working group, says he introduced the statement after hearing from both environmental activists outside Occupy as well as an official at a union who opposes the Keystone pipeline. "In the Occupy framework, it's unacceptable for an outside entity to assume solidarity with the 99 percent when they're not there," Woodcock says.

Indeed, Keystone has split the labor movement. The AFL-CIO for example -- of which the Building Trades Unions are a part -- is declining to take a position on Keystone. An AFL-CIO spokesman declined to comment for this story. And other unions within the AFL-CIO, the Transport Workers Union and the Amalgamated Transit Union, are on the record opposing Keystone for environmental and public safety reasons.

At the heart of the split is the fiercely debated question of whether the Keystone pipeline, which would snake from Canada's tar sands through the American Midwest to the Gulf Coast, would create jobs.

"The only study not paid for by TransCanada -- done indeed by a big labor think tank -- made it clear this would kill as many jobs as it created. And even those jobs would be very temporary -- that's why you build a pipeline so no one ever has to work again to get the oil out," said anti-Keystone organizer Bill McKibben in an email. TransCanada is the oil company behind the pipeline project.

The Washington Post on Sunday weighed the arguments on both sides:

A TransCanada statement Sept. 30 said the project would be “stimulating over 14,400 person years of employment” in Oklahoma alone. It cited a study by Ray Perryman, a Texas-based consultant to TransCanada, saying the pipeline would create “250,000 permanent jobs for U.S. workers.”

But Perryman was including a vast number of jobs far removed from the industry. Using that technique in a report on the impact of wind farms, Perryman counted jobs for dancers, choreographers and speech therapists.

Meanwhile, the Cornell Global Labor Institute issued a study suggesting that any jobs stemming from the pipeline’s construction could be outweighed by environmental damage it caused, along with a possible rise in Midwest gasoline prices because a new pipeline would divert that region’s current oversupply of oil to the Gulf Coast.

It's also worth noting that oil companies are playing a significant role in the JobsForThe99 pro-Keystone campaign. One of the co-sponsors of the campaign, the Oil & Natural Gas Industry Labor-Management Committee, counts among its leadership the president of ExxonMobil and the president of the American Petroleum Institute, which is the industry's trade association. The executive director of the committee is Timothy Dickson, principal of the Alexandria-based Groundswell Communications, which serves as the headquarters for the committee.

Dickson has worked for state and national Democratic party outfits, corporate interests like the Chamber of Commerce and PhRMA, and unions like the Teamsters.

"The partnership between America's Building Trades Unions and the [oil] industry focuses almost singularly on jobs," he says of the Oil & Natural Gas Industry Labor-Management Committee, which was created two years ago.

The groups behind the JobsForThe99 website did not immediately respond to requests for comment on Occupy Wall Street's disavowal of the campaign.