The four ways Obama can beat the GOP in '12

From a primary season suicide pact to Republican brand poisoning, how he might survive an ominous-looking campaign 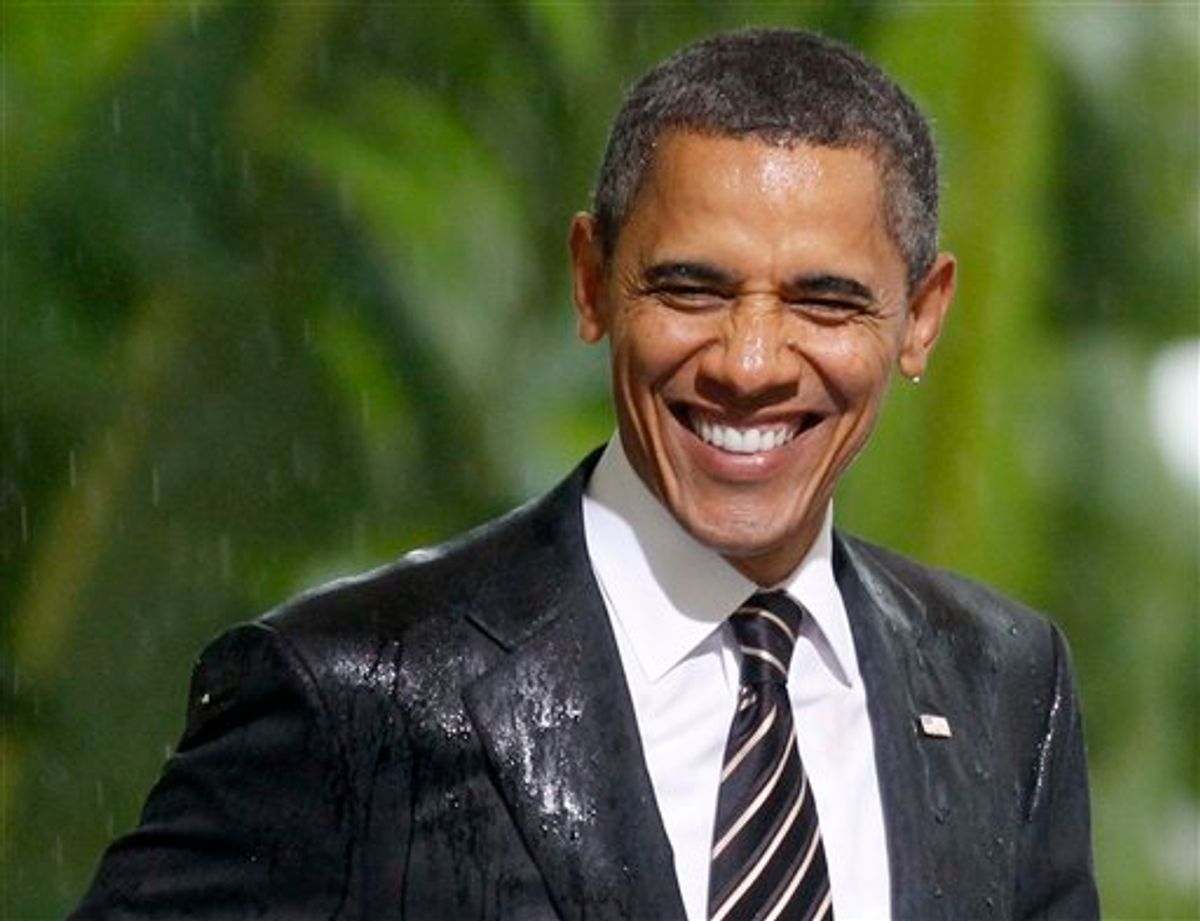 President Barack Obama smiles in the rain as he and French President Nicolas Sarkozy attend an event honoring the alliance between the United States and France and their efforts in Libya , Friday, Nov. 4, 2011, at Cannes City Hall, after the G20 Summit in Cannes, France. (AP Photo/Charles Dharapak) (AP)
--

The next presidential election will be held exactly a year from Sunday, and while plenty can and will happen between now and then, the basic story line has been apparent for a while: Barack Obama is in grave danger of losing his job.

This is the fate of any president whose term coincides with steep unemployment, meager growth and soaring economic anxiety. For all of the twists and turns that will play out in the next 12 months, there may be no way for Obama to overcome the public’s tendency to throw out their leaders under conditions like this. But there are, roughly speaking, four scenarios that could allow him to survive anyway.

One is obvious. If, somehow, the economy unexpectedly comes to life in the next nine months or so, it would presumably ease voters’ anxieties and measurably alter their assessment of Obama’s performance – and their willingness to give him another four years. (Nate Silver has tried to gauge the probability of an Obama win using different GDP forecasts.) Of course, this is easier said than done, especially with congressional Republicans intent on blocking just about any effort by Obama to grow the economy – even when there is wide agreement among economists that his proposals would add jobs and spur growth.

If, despite the GOP’s efforts, there’s a surge of growth anyway, it will probably have to come well in advance of the election to benefit Obama. Here the example of George H.W. Bush’s doomed 1992 reelection bid looms large. In the final days of that campaign, news broke that GDP for the third quarter of the year had grown at almost twice the expected rate. The recession that had imperiled Bush, it would later become clear, had actually been over for a while and a recovery was underway. But it would take time for that reality to sink in with voters, and the report came too late to do Bush any good.

Another Obama survival scenario involves the Republican Party nominating pretty much any candidate other than Mitt Romney – who, you might have heard, is having an awfully hard time securing more than 25 percent in GOP polling, despite facing some pretty awful competition.

If Republicans were, for instance, to nominate Herman Cain, a national level replay of last year’s Nevada Senate race – in which Harry Reid prevailed in a race he had no business winning solely because voters found the GOP’s nominee, Sharron Angle, an unacceptably erratic, eccentric and extreme alternative – figures to ensue. And it seems more and more likely that this would also be the case if Rick Perry, who remains viable in the GOP race because of his money, organization and support from some key party players, is the candidate. His dreadful – and at times just bizarre – public performances have scared away Republicans who were initially ready to embrace him. The effect on swing voters in a general election campaign would probably be similar.

Of course, for all of Romney’s struggles, the odds that he’ll secure the nomination still look good – especially with Cain’s handling of the ongoing sexual harassment saga reinforcing to at least some influential Republicans how politically suicidal it would be to nominate him. “He’s not going to be the nominee,” Bill Kristol said on Sunday, adding that “the air is slowly going to go out of the Herman Cain bubble regardless of the sexual harassment charges.” And, as Jonathan Bernstein explained last week, if you look closely at the available data, there’s good reason to suspect that Romney – for all his troubles in getting Republican voters to say yes to him – will ultimately be able to win them over.

Then there’s the third formula for Obama: going negative. Obviously, negative attacks are a staple of any high-stakes campaign, and the Republican nominee – no matter who he or she is – will be subject to plenty of them in 2012. But if Romney is the candidate and economic anxiety is still high, there will be an even stronger imperative for the Obama campaign to go after him.

The reason is that Romney is, on paper, more generic and less prone to erratic antics and extremist bombast than his GOP rivals. As the nominee, he probably wouldn’t be stepping on political landmines on an hourly basis, as Cain or Perry probably would, making it more important for Obama’s team to poison the jury against him. There’s no mystery how they’d try to do this: play up Romney’s spineless flip-flopping and draw attention to the ugly side (i.e., taking over companies and laying off workers) of his past work in venture capital.

Perhaps this would be enough to shave a few decisive points off of Romney’s support. Then again, Romney has shown himself to be a more smooth and polished candidate this time around. He may deflect these attacks.

Which brings us to the final Obama survival scenario – the one he’ll have to rely on if there’s no economic miracle, if there’s no primary season suicide pact among Republicans, and if the Romney attacks don’t take hold: GOP brand poisoning.

To understand how this might work, you just need to look at the latest national poll from Quinnipiac University. It shows Obama with a typically shaky 47 percent approval rating – somewhat better than he’s fared in other recent polls but still an extremely perilous place for an incumbent to be a year before facing the voters.

But look deeper, to the questions about voters’ assessments of the two parties. Here, the GOP has a favorable score of just 28 percent, with 57 percent of voters viewing them unfavorably. For Democrats, the spread is better: 36 to 49 percent. More interesting is this: The GOP’s score has steadily eroded over the last year. In November 2010, the party’s favorable/unfavorable score was 40/45 percent in the same poll. In September, it was 32/53. And now not even 30 percent of voters give the party a favorable score. But the Democrats’ numbers have remained consistent: Their score in November ’10 was 38/50.

This is only the latest evidence of Republican brand poisoning. In 2009 and 2010, when the party was completely out of power in Washington, it was able to serve a simple role for swing voters: the default vehicle for their frustrations with Obama and the ruling Democrats. But the GOP’s emergence as the majority party in the House and the perpetual brinkmanship that ensued have focused attention on the inflexible and ideologically extreme conservatism that now grips the party and its elected officials. Some of the headlines that newly empowered Republican majorities in several statehouses have generated this year have probably contributed to this too. The result is that the Republican Party’s image is about as bad as it’s been in the modern era.

Ultimately, this may be Obama's best hope for salvation. If all else fails for him in the next year, it’s still possible that voters will think twice before handing the White House to anyone with an “R” next to his name.