Can a stroke turn you gay?

The British tabloids go nuts for a hetero-turned-homo tale. We ask the experts if it could possibly be true 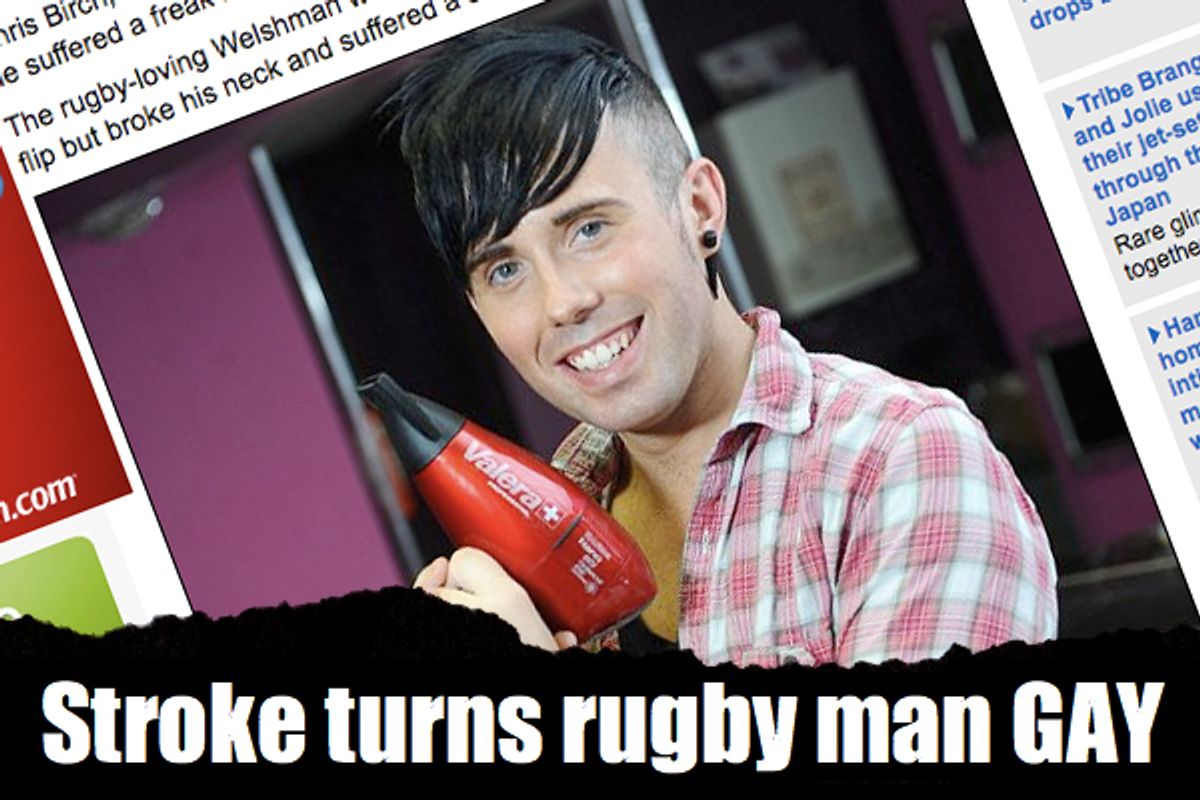 Thanks to the Daily Mail, my favorite source for laughable pseudo-science -- seriously, it's better than Fox News! -- I have an excuse to contemplate whether a stroke can turn a weightlifting, lady-loving bro-dude into a fabulous gay hairdresser.

Today, the Mail reports that 26-year-old Chris Birch broke his neck while attempting a back flip and suffered a stroke. When he woke up in the hospital, he instantly felt different. "I wasn't interested in women any more," he said. "I was definitely gay." The story is heavy with stereotypes: Not only did he trade in his fiancé for a live-in boyfriend, he also opted for hair styling over banking. For proof of his transformation, the tabloid provides a sassy photo of Birch posed with a blow dryer at the ready.

Granted, I take everything published in the Mail with a mountainous heaping of salt, but this isn't the first time someone has claimed that a brain injury changed their sexual orientation -- Salon has even featured a personal essay from a mom whose son came out to her (again and again, in fact) after his brain trauma. And, actually, this isn't the first time Birch has been reported on by British tabloids, either: Both the Mirror and the Sun have given this story a go. So I turned to experts and the available research to find out whether a stroke can turn you gay -- and, if so, what the hell?

It's been extensively documented that strokes and brain injuries in general can cause significant alterations in personality and sexual behavior -- but sexual orientation changes are in the minority. Hyposexuality is a far more common outcome and, to a lesser degree, hypersexuality. There are a handful of studied cases where heterosexual men developed pedophilia after brain trauma. In one such example, a middle-aged man suddenly "began to stash child pornography and sexually molest his 8-year-old stepdaughter," according to the New Scientist. It was discovered that he had a large brain tumor and, after it was removed, "his sexual interests returned to normal."

A couple years ago, The Journal of Neuropsychiatry and Clinical Neurosciences published a case report on a 57-year-old man whose stroke appeared to change his orientation from gay to straight. The authors didn't have an easy time explaining why this might be, though: "The mechanism by which a person acquires his sexual orientation is complex and ranges from pure psychological theories to more complex biological concepts." Which is to say: Don't trust the Daily Mail's uncomplicated take.

Richard Wassersug, a professor of anatomy and neurobiology at Dalhousie University in Halifax, Nova Scotia, has found through his research that "in a small sample of men, voluntary androgen deprivation can lead to changes in sexual orientation." Androgens, for our purposes, are steroid hormones that play a key in male sexual development -- testosterone being the superstar of the bunch. What's that have to do with a stroke? Well, he explains, "By extension, if a stroke knocks out certain centers in the brain with androgen receptors, it is not a big jump to consider it possible for a stroke to alter sexual orientation."

These cases may prove especially useful in our evolving understanding of human sexuality. One relevant study speculated that "alterations in sexual preference associated with brain lesions may suggest which areas of the brain influence sexual orientation in humans." The downside, of course, is that as we understand more, those wanting to control others' sexuality, through "reparative therapy" and the like, will have yet more inspiration.