As the movement searches for an agenda, it gives new life to an issue recently thought to be a lost cause 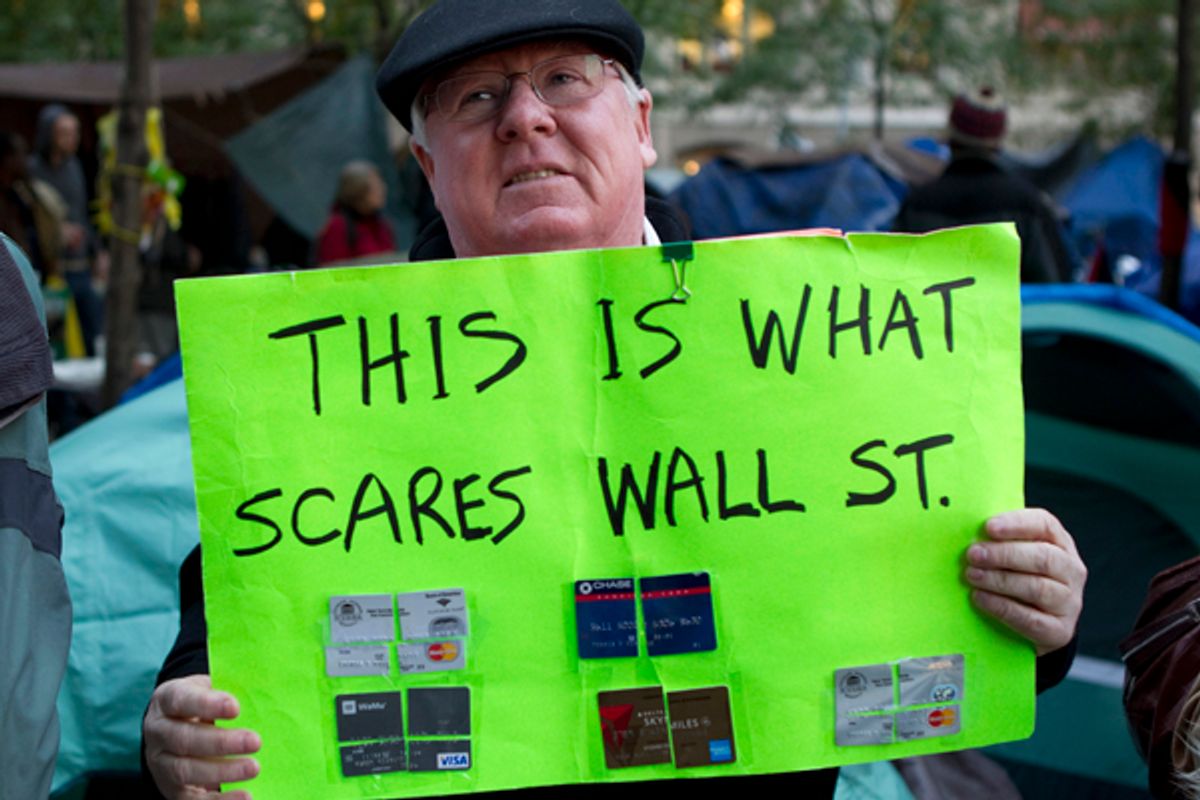 BOSTON, Mass. — As the Occupy Wall Street movement, which is often criticized for lacking a focused agenda, begins to hone its message, one issue has emerged as a possible catch-all: campaign-finance reform.

It's not sexy. The phrase conjures memories of Sens. John McCain and Russ Feingold droning on about its importance a decade ago on Capitol Hill.

But now new life is being given to a cause most reformers had abandoned as unattainable.

Central to the frustration of Occupy Wall Street demonstrators is corporate influence on politicians, which, they say, has led to most of the other concerns on their list, such as deregulation of the financial sector, unequal distribution of wealth and environmental destruction. Campaign-finance reform, some Occupiers believe, would address the root of the problem.

“There are so many people here with so many different ideas and so many different goals,” said Andrew Green, a volunteer at Occupy Boston who works full time at a pharmacy. “So there hasn't yet been any unifying decisions made as to what to do. But taking money out of politics would be a very good start.”

Campaign-finance reform as a central demand is being promoted in part by Robert Steele, a self-described former CIA officer who has, in an unrelated crusade, championed open-source intelligence sharing. He was filmed lecturing a working group on electoral reform at Occupy Wall Street in New York, a video that was posted to YouTube. Four days later, it had been viewed more than 25,000 times.

In the video, Steele says he has been working on the issue since “Al Gore rolled over and played dead in 2000.” His goal: persuade the Occupy movement to focus on passing the Electoral Reform Act of 2012, a proposal he drafted that would reform, among other things, campaign financing ahead of the 2012 election.

The proposal calls for an elimination of all federal and corporate financing of campaigns and all political action committees, while creating a public “Electoral Trust Fund.” Air time, the proposal says, should be free and equal for all candidates.

It's unclear whether the issue will be embraced by the movement as a whole. But even if it is, reforming the campaign-finance structure would be a difficult, if not impossible effort.

“Congress has proved highly resistant to any reforms to the campaign-finance system,” said Anthony Corrado, an expert at the Brookings Institute who has been studying the issue for more than 20 years. “And that opposition tends to run on both sides of the aisle.”

McCain, once regarded as a bipartisan workhorse, labored for five years at the turn of the century to focus attention on the issue, fighting for legislation to halt unlimited corporate contributions to political candidates.

Working with Feingold, a fellow senator, the legislation was eventually passed by Congress in 2002 in the wake of the Enron scandal, which put pressure on lawmakers to regulate corporate malfeasance.

But in 2010, the Supreme Court, in a landmark 5-4 decision, prohibited the government from censoring political broadcasts funded by corporations or unions.

The majority opinion wrote that corporations are treated the same as people under the law, and are therefore protected by the First Amendment.

“The reforms that traditionally might have been put forward to limit corporate influence in politics have now essentially been deemed unconstitutional by the Supreme Court,” Corrado said.

Shortly after the ruling, the US Court of Appeals ruled in a separate case that, as a result of the Supreme Court decision, limits on corporate political donations and the burden of disclosure were also unconstitutional.

“We have gone from a world where most of the spending was subject to contribution limits and disclosure, to a world where companies can spend money out of their own bank accounts and finance the expenditures of third-party groups with little known about the source of that money,” Corrado said.

The new regulations will be most evident in the upcoming 2012 presidential election.

If the Occupy Wall Street movement continues to gain momentum, and embraces campaign-finance reform as a central demand, Corrado said he thought it might succeed in getting the reforms back on the national agenda. But unless the Supreme Court revisits its earlier decision, the only way to alter the current structure would be to offer alternative sources of funding to candidates, perhaps in the form of a public fund.

Andrew Green at Occupy Boston, echoing Steele's proposal, said another possibility would be to establish a public radio broadcast where candidates could speak freely without paying for it. But others find it hard to imagine a candidate successfully using free public radio to compete against a candidate that is backed by some of the world's wealthiest businesses.