It's more than pulled pigtails 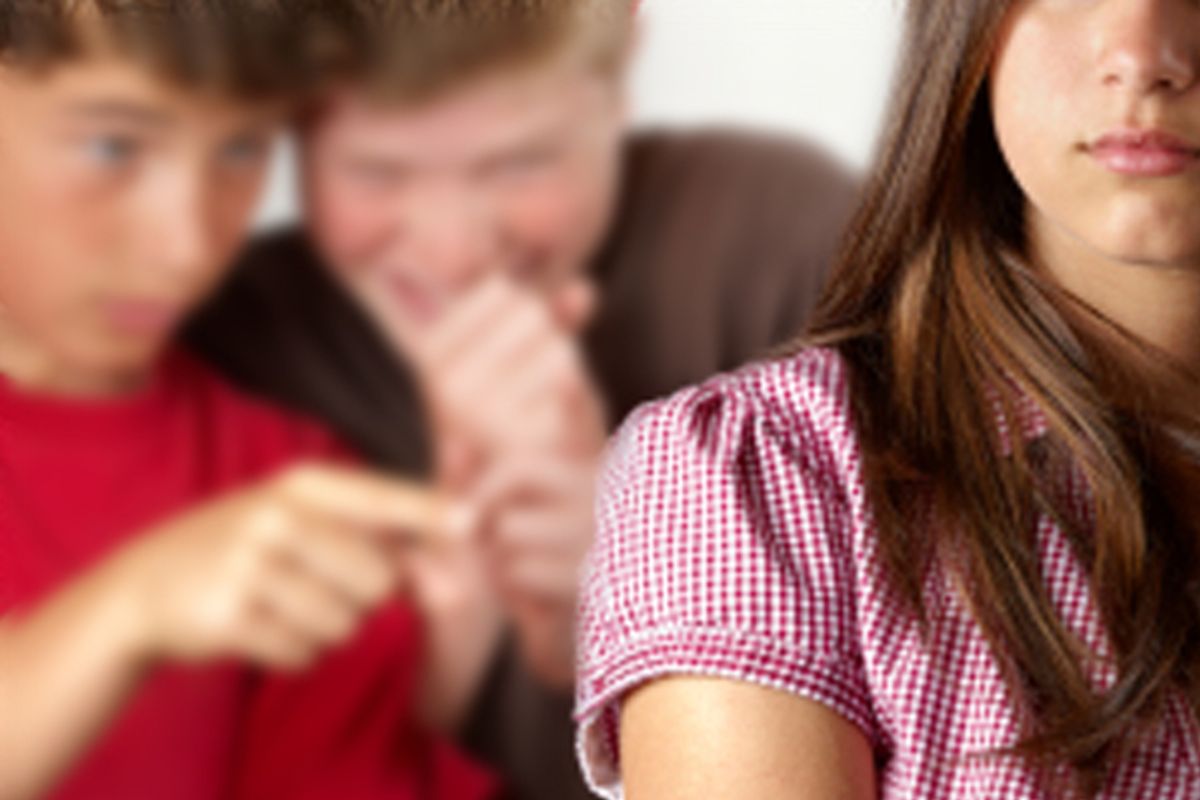 My first sexual memory is of being cornered on the playground in second grade. A boy, whose face is but a blur now, chased me to an isolated part of the yard, pinned me against a wall with a hand on either side of my head and started making exaggerated humping movements while chanting the title line from Color Me Badd's "I wanna sex you up" – it was 1992. I managed to duck under his arm and ran off.

Turns out I'm far from alone in experiencing such early unwanted advances. On Monday, a study finding that sexual harassment between peers is widespread in grade school started making the rounds, and the New York Times' coverage swiftly climbed the most-emailed list. The survey, conducted by the American Association of University Women (AAUW), found that almost half of seventh to 12th graders had been sexually harassed during the last school year. Girls were the most frequent target of "unwelcome sexual behavior," but 40 percent of boys had experienced such an incident in the last year. The news has predictably stirred up significant media attention – the topic of kids and sex always does – but the phenomenon itself is hardly new. For decades now, countless studies have shown this to be a problem, and yet the message doesn't seem to stick.

In search of anecdotes that could prove more memorable than faceless statistics, I put out a call for firsthand stories and received an instant deluge of emails – all from women. I guess this shouldn't be too surprising, despite the significant presence of boys in the survey: Not only does peer sexual harassment against boys generally take a different form, but also, men aren't supposed to still be "hung up" on it. Another interesting difference arose in my admittedly minute and totally skewed sample: Most stories took place before seventh grade -- and we're not just talking about pulled pigtails here. For example, Dawn wrote me in an email: "In sixth grade there was a guy my age who started off with lewd comments and eventually graduated to pinching my butt, and finally grabbing my breasts. More often than not he would corner me by my locker to do this and one day I just hauled off and swung my math book at his balls. Hard." He never bothered her again.

In a less physically invasive albeit much earlier encounter, a 7-year-old Catherine was walking to the school bus when a handful of boys from her class ran up to her. "One of them grabbed me from behind, wrapping his arms around my torso so I couldn't move my arms," says Catherine, now 28. "The other one came around front, grabbed my face and kissed me on the mouth. Two more boys materialized, each of them trying to kiss me on the mouth, as well." She kicked and screamed and one of them yelled, "Quick! Grab her legs!" A boy "dove into the dirt and wrapped his arms around my ankles so I couldn't move very much at all," she says -- and then they took turns pecking at her face. After a few minutes she was allowed to wriggle away.

"It didn't feel 'dirty' in the way that I regarded sexual acts at the time, but did feel very confusing," she says. At first she kept it to herself, but later on the bus ride home some classmates who had witnessed the whole thing started chanting, "Catherine got kissed! Catherine got kissed!" She said, "It was then that I felt ashamed of what had happened."

Several women wrote to say that they didn't know what to call these childhood experiences until much later. "Only years after it happened did I realize that I had been sexually harassed in elementary school," says Dana. "Elementary school!" It was 1994, the summer after her sixth grade graduation and she was working on a farm with a bunch of seventh and eighth grade boys from school. Mostly, they teased her for not having developed breasts yet, but one incident stands out in her memory: While working in a corn field, she says, "one of the boys grabbed a handful of corn silk," threw it at her and yelled, "Why don't you put this between your legs, because at least then you'd have something there!'"

Of course, once girls do start to develop, they're subjected to a whole new level of teasing. In fifth grade, Elizabeth was bestowed the nickname "MilkDuds" because she was the first in her class in a small North Carolina town to grow breasts. "The kid who came up with it was a very nice, very smart guy who I honestly think was attempting to congratulate me on being the first to do what girls were 'supposed to do,'" she says. "I didn’t like the attention. I didn't exactly like the boobs either." It's no wonder; her physical transformation came with "lots of getting jabbed or punched in the boobs." Adults didn't take it seriously, she says, "It all got lumped in with 'kids teasing each other' or 'boys being boys.'"

It's easy to recognize the advancing creep of decidedly adult ideas about sex in these stories. In 1998 as a fourth grader, Laura was paired up for regular in-class assignments with a fifth grade boy who was lagging behind his peers. "He liked to tell me what to do, make me do all the work, and tell me that it was my job to do work for him because I was the girl, and he was the man," she said. "One day he came in and said he was the pimp, and I was the prostitute, so I had to do what he said. I didn't know what that meant, so I ignored him." The next day, the same boy "shouted in class that all the girls were his prostitutes," she says. He was punished and the girls had to report to the principal's office to "write statements about how what he'd said made us feel" – only the adults refused to actually explain to them what the word "prostitute" meant. (I have to wonder whose discomfort they were protecting – the kids' or their own.)

Speaking of conspicuously adult language, MaryAnn was tormented in fourth grade in 1991 by a classmate who cornered her on the playground one day and said, "I'm going to rape you." Of course, she doesn't know whether he actually knew what the word meant and only had a loose grasp on the concept herself. "I don't remember what I said but I just remember running away." Another Mary remembers that around fifth grade in 1995 the boys in her class began slinging insults like "whore" and "slut" at the girls. (This was a year after the "humiliating" bra snapping started.) She says she learned early on that girls were supposed to endure this sort of thing. "How many times did I go to my teacher as a little girl and complain that some boy called me a mean name or pulled my hair? Teachers would always say, 'He just likes you,' or 'He's just trying to get a reaction out of you.'"

Some women shrug off these early encounters, but others still feel a palpable anger toward the adults that laughed at or ignored the harassment. "Part of me is still quite angry at the teachers I had at that age," Mary says. "As an adult, I've learned I have the right to tell people how to talk to me. I've had to tell men twice my age, 'Don't call me baby.' I think young women wouldn't have to fight for that basic respect if they learned from grade school that when a boy pulls your hair it doesn't mean he likes you" – and, I would add, that even if he does like you, it doesn't make it OK.

To some, this will seem an insignificant area of complaint – you know, just another example of women getting together to whine about how hard it is to be desperately desired by men! But even the tamer incidents powerfully stuck with these women, just as bullying of all sorts shapes the way we feel about ourselves, and how we move through the world as adults. A woman named Janice writes to tell me that she was repeatedly groped by a boy in seventh grade and says, "This incident and others had a really big impact on how I related to boys and to dating as I matured." These experiences also sometimes faintly resonate with sexual harassment encountered later in life. When Liz, now a college student, had a fellow sixth grader come up and try to "hump" her, she reported him to the principal. "I forgot about the incident for a number of years, and didn't think about it again until I learned about Anita Hill's experience and testimony when I was in high school," Liz says (she was 8 months old when Hill took the stand). "Certainly in light of the Herman Cain allegations, I've been thinking about it a lot more recently."

Despite the real impact, though, many of these women prefaced their stories by acknowledging that it could have been so much worse (which seems a dangerously slippery slope of gratitude, if you ask me). In fact, researchers who have devoted their careers to studying the phenomenon of sexual harassment in grade school draw a direct link to abuse later in life. Nan Stein, a researcher at Wellesley College Center for Research on Women, says she has realized from decades of studying the topic that "schools may well be the training grounds for sexual and domestic violence through the practice of and permission given to the public performance of sexual harassment."