Nick Kristof to the rescue!

When a New York Times columnist live tweets a Cambodia brothel raid, who benefits -- the women or the reporter? 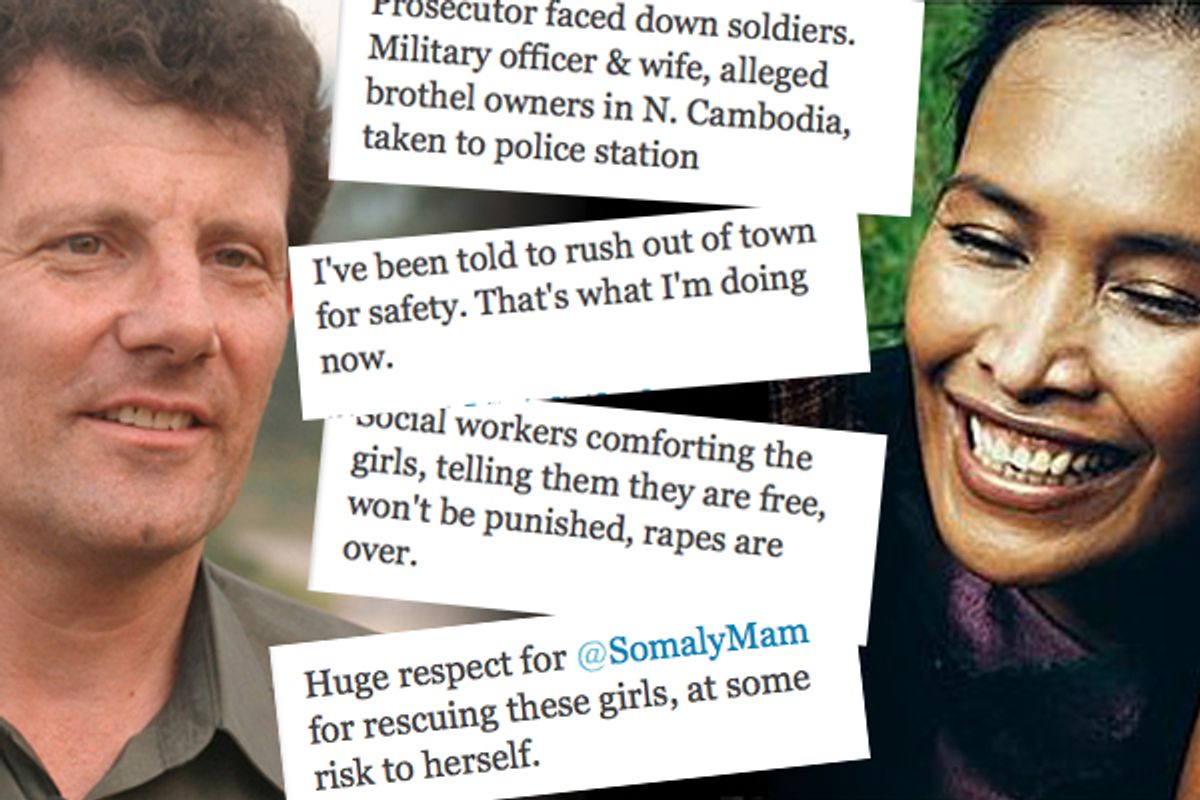 Yesterday, New York Times columnist Nicholas Kristof live-tweeted a brothel raid in Cambodia. Kristof's novel approaches to international women-rights reporting have previously included purchasing two Cambodian underage prostitutes for the purpose of liberating them and naming a 9-year-old Congolese rape victim. After those generated criticism from victims' advocates, Kristof shouldn't be surprised that not everyone was cheering along his recent outing.

The narrative proceeded in a familiar fashion: There were villains, even some with military ties; then there is a rescue. Kristof tweeted, "Girls are rescued, but still very scared Youngest looks about 13, trafficked from Vietnam." And then, "Social workers comforting the girls, telling them they are free, won't be punished, rapes are over." He was accompanied by Cambodian anti-trafficking activist and forced-prostitution survivor Somaly Mam. Post-presidential niece Lauren Bush chimed in perkily, "Awesome reporting by @NickKristof as the (sic) raided a brothel in Cambodia with @SomalyMam this morning!"

The trouble is, nothing involving sex work is ever quite as cut-and-dried as a sweeping rescue. For one thing, as writer and sex workers' rights activist Melissa Gira Grant pointed out, Human Rights Watch has exposed serious abuses at the government centers where sex workers are detained, including "beatings, extortion, and rape at the hands of authorities." In other words, there's no guarantee that just because they've left the brothel, their lives are going to improve. Somaly Mam is a Cambodian, but her proposed remedies to improve the lives of sex workers aren't necessarily universal; Matthew Greenall, who described himself as an advisor to "AIDS & sexual health programmes in low income countries," noted that it came in the same "week cambodian sex workers set up a legal support & human rights monitoring centre."

Though Twitter can allow for change over time and even, in its unpredictability, jar us out of our complacency and first-world problems, it does not traditionally provide any nuance for what happens after a dramatic and inspiring moment. Form matters, as was clear in the discussion following Mother Jones reporter Mac McClelland's decision to live-tweet her day with a traumatized Haitian rape victim. That raised questions not just of storytelling, but of safety and consent, with the latter still in dispute. Yes, telling the story of a victim meant an alternative to silence and invisibility, but it could also put her back into jeopardy.

"Trauma stories require the writer to consider the reader, listener, or viewer as a partner in the creation of ethical journalism. Our choices as craftsmen -- about identity and attribution, about detail, about writer's voice, about structure and style, and even about medium -- do more than simply tell the story. They tell readers about our values," wrote Rwanda-based journalist Jina Moore in the Columbia Journalism Review earlier this year. What values can we yield from Kristof's series of communications? That the breathless sense of heroic risk-taking, one simultaneously authentic and swaggering, trumps all.

I don't believe Twitter is necessarily trivializing, but it isn't a mode that fits every story. Lindsay Beyerstein wrote of the McClelland incident, "Ethical journalists balance (the) public's need to know against potential harms to innocent people. In this case, there was no compelling need to know the these details of [McClelland's subject]'s rape instantaneously," adding, "the allure of Twitter is that it's instantaneous and unfiltered. That's all very well for color commentary under controlled conditions, like press conferences and sporting events." Sex trafficking victims presumably fall under a different category from those in-the-moment events.

To Kristof's significant credit, he doesn't bloviate from afar and he writes about things that other people ignore. But leaving it at that is a low bar indeed. At the end of the day, he reported on his Twitter page that he was ordered to leave the site of the raid out of fears for his safety. "I'm safe & my live-tweeting of the raid on brothel in northern Cambodia is over. You can see them all on my Twitter page," he wrote. Perhaps we'll learn in his column what comes next for the girls and women.