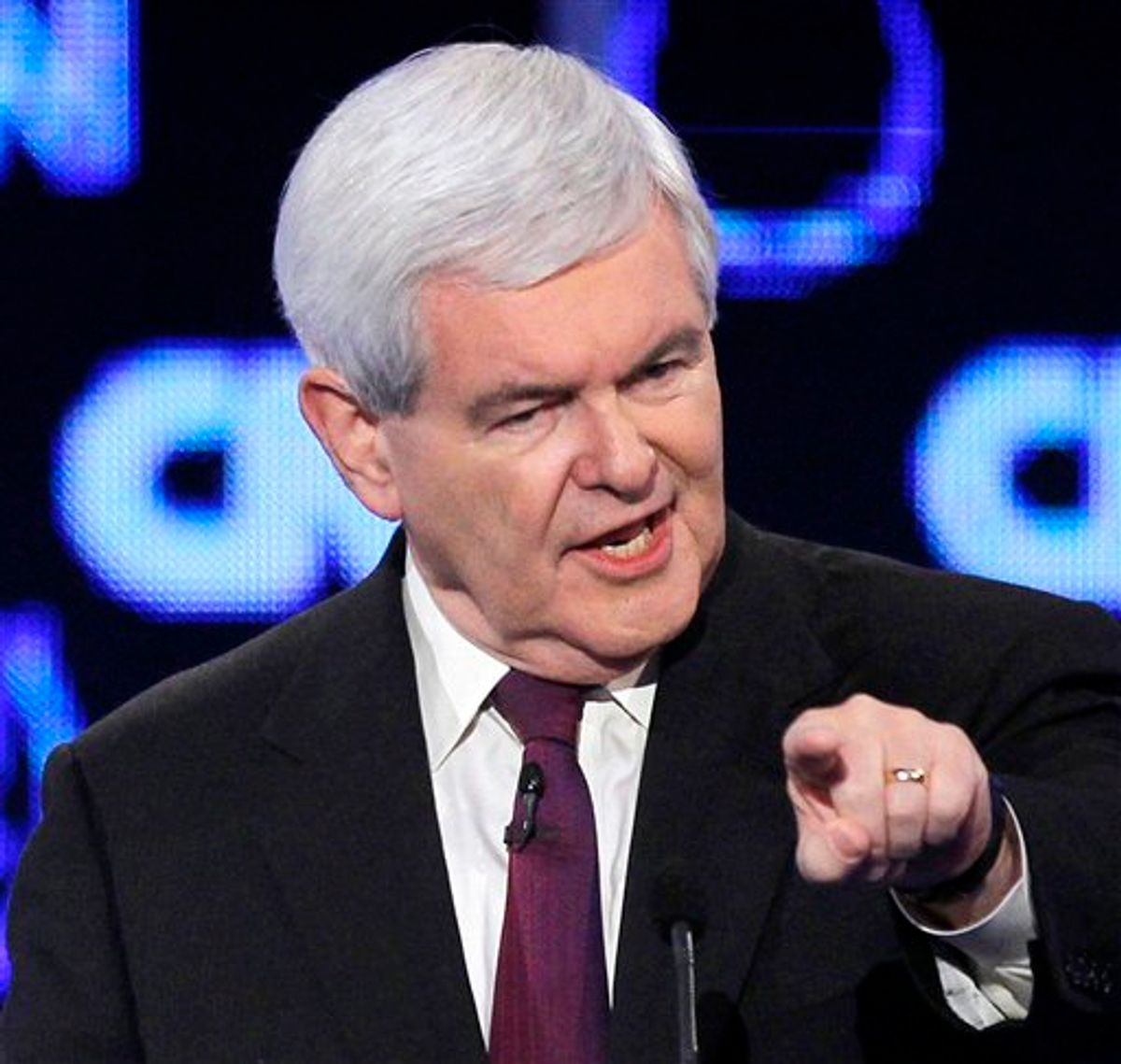 The 2012 Republican campaign has played out in a series of distinct phases, with Mitt Romney running at or near the top of the pack all year while, one by one, his rivals have taken turns surging in the polls, emerging as his chief competition, then fading and yielding the spotlight to a new non-Romney candidate.

Donald Trump, even though his candidacy was purely fake, was the first to play the anti-Mitt role. When his bubble burst, Herman Cain came out of nowhere to fill the void, keyed by a strong early May debate performance. But Cain's moment only lasted for a month or so, and then it was Michele Bachmann's turn, which served as a mere prelude to Rick Perry's late summer rise, which turned into an autumn freefall that made it possible for Cain's return from the dead. Now, for the past few weeks, with Cain facing new media scrutiny, attacks from his fellow Republicans on his tax plan, and revelations of past sexual harassment charges, we've entered the strangest phase yet: The non-surge surge of Newt Gingrich.

The stories have been appearing for weeks now. Certainly, the idea that the former House Speaker is next-in-line for a surge makes sense, if only because the vast majority of Republican voters seem dedicated to flirting with Anyone But Mitt for as a long as possible and there just aren't many options for them.

The assumption, ever since his fellow candidates ganged up on him and he faded into the background at a mid-October debate (and especially since the sexual harassment story broke more than a week ago), has been that Cain's time near the top of the polls is short. And if it's not going to be Cain, then who else is there for disgruntled conservatives? Bachmann has seemingly marginalized herself even with her natural fan base. Perry has the money and campaign muscle to make a move, but he just keeps finding new ways to scare away Republicans. Rick Santorum would love to play the part, but there may just be something about him that makes Republican voters resistant to him.

And then there's Newt, who has a flair for sounding wonkish and authoritative at debates (even if what he's actually saying amounts to gobbledygook). He's shown some life in polling these past few months, moving into the low single-digits in national surveys and even passing Perry lately. This is far better than anyone thought he'd be doing back in the spring, when he embarked on what may have been the most epically botched campaign rollout ever, a weeks-long trainwreck that ultimately led his entire senior staff to quit. He still has little money or organization, but as we've seen with Cain, those aren't barriers to bursts of polling success in this year's GOP race. So sure, Newt's turn could be next.

But if it's ever going to happen, it probably has to happen right now. Because for all of the talk of a pending Newt surge these past few weeks, there's not been much evidence of one. A new NBC News/Wall Street Journal poll, for instance, has him at 13 percent, a very distant third place. Again, that's better than Newt used to be doing, but the question is whether he can take the next step and supplant Cain and vie with Romney for the lead.

The good news for Newt is that Monday's news gave him an opening, with a woman stepping forward to accuse Cain of groping her. Until that moment, Cain had been weathering the sexual harassment storm just fine, at least within the GOP, thanks to the lack of specific accusations and some impassioned defenses from influential conservative voices. But the new allegations may be forcing the issue to a head, with more leaders on the right now demanding that Cain start giving answers -- and stop getting a free ride from the conservative media. Here's Bill Bennett:

If Herman Cain wants to be taken seriously as a public advocate for anything, never mind running for the chief executive and commander in chief of the most powerful and important and blessed country in the world, he needs to give a full press conference dedicated exclusively to this issue and these allegations.

I have watched long enough and held my tongue long enough to give him the benefit of the doubt, but can no longer say this is a witch hunt, “a lynching” to use his word, or any other euphemism. There are allegations out there that matter and they have stacked up

And Haley Barbour demanded that Cain address the accusations head-on:

“If there is any substance to the claims, if the American people believe that somebody abused women, they are not going to elect him or her president,” he says. “If this were taken as being true, and people believe it’s true, then I don’t think that can be overcome.”

“That’s just not acceptable behavior in our country, particularly if there is a pattern,” he says.

Newt himself seems to get that this is his last, best chance for a real moment in the sun. On Sean Hannity's show last night, he said that "I think at some point in the near future that Herman and his campaign have to lay all this out and put it to rest.  I think that the pressure on them to do that will become very real." Apparently, Cain will be holding a press conference in Arizona today to respond to the new allegations, although the details aren't clear yet. There'll also be two GOP debates in the next week. If Newt can't move past him now, then it will be safe to say he's already reached his ceiling.