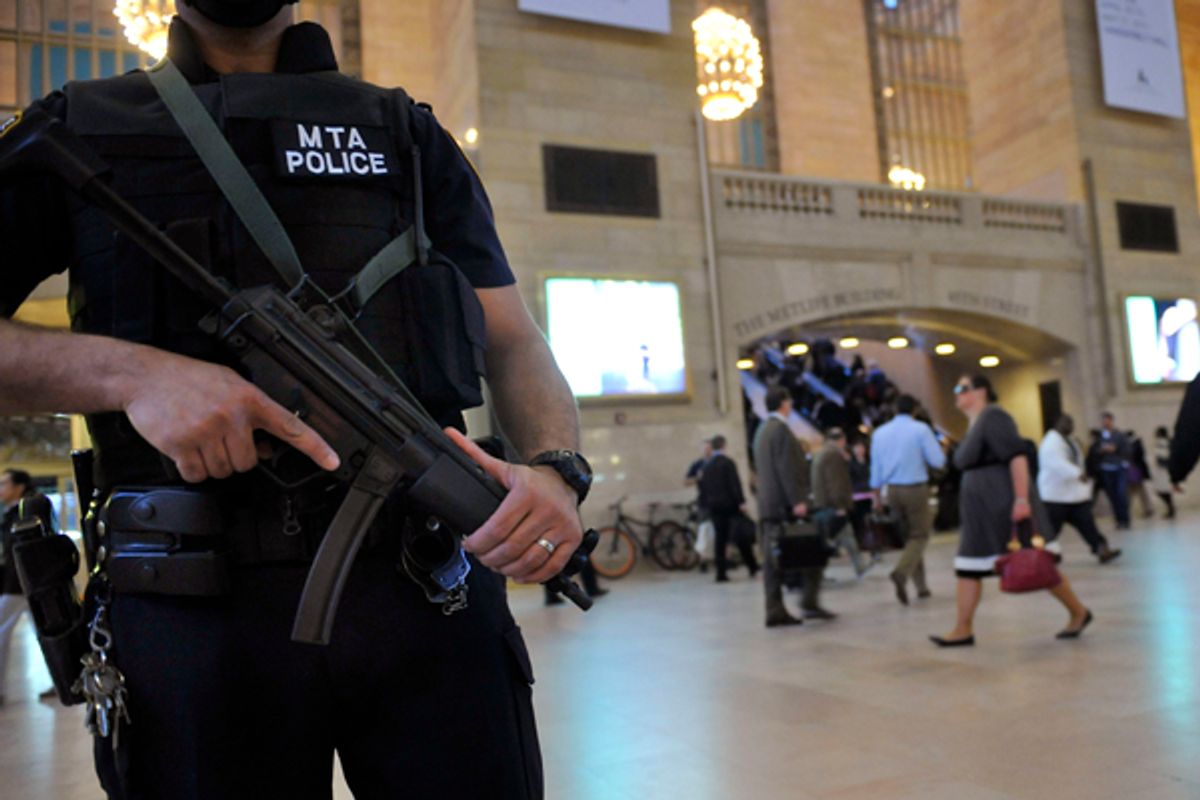 The Atlantic has a good piece on one of those subjects that I am slightly obsessed with, the ongoing militarization of American police forces. As a New Yorker, I am accustomed to being greeted by cops bearing assault rifles bravely monitoring the morning commute, which is more than slightly jarring, but the depressing thing is that that sort of sight quickly becomes normalized.

As former peace officer and Iraq veteran Arthur Rizer and co-author Joseph Hartman write, the police arms race has very clearly spread well beyond the urban borders of the only cities to actually be targeted by foreign terrorists.

Now, police officers routinely walk the beat armed with assault rifles and garbed in black full-battle uniforms. When one of us, Arthur Rizer, returned from active duty in Iraq, he saw a police officer at the Minneapolis airport armed with a M4 carbine assault rifle -- the very same rifle Arthur carried during his combat tour in Fallujah.

The extent of this weapon "inflation" does not stop with high-powered rifles, either. In recent years, police departments both large and small have acquired bazookas, machine guns, and even armored vehicles (mini-tanks) for use in domestic police work.

What possible need does your average American police department have for a tank? I mean, besides giving it to Steven Seagal so that he can kill a puppy during a raid on a suspected cock-fighter that's being filmed for a reality show.

Turning police departments into quasi-National Guard regiments isn't just a huge waste of resources, it's also dangerous and demoralizing. A militarized police force makes the citizenry -- especially minorities -- feel like they're living under a military occupation. (As with most police abuses, it's generally easier to ignore for members of the classes not routinely stopped, frisked and thrown in jail for minor drug offenses.) It's unsettling and undemocratic. And the cops start to feel like occupiers.

The most serious consequence of the rapid militarization of American police forces, however, is the subtle evolution in the mentality of the "men in blue" from "peace officer" to soldier. This development is absolutely critical and represents a fundamental change in the nature of law enforcement. The primary mission of a police officer traditionally has been to "keep the peace." Those whom an officer suspects to have committed a crime are treated as just that - suspects. Police officers are expected, under the rule of law, to protect the civil liberties of all citizens, even the "bad guys." For domestic law enforcement, a suspect in custody remains innocent until proven guilty. Moreover, police officers operate among a largely friendly population and have traditionally been trained to solve problems using a complex legal system; the deployment of lethal violence is an absolute last resort.

Soldiers, on the other hand, are trained to identify and kill the enemy. This is a problem. Cops are increasingly seeing the citizens they're hired to protect as "the enemy." This is in part how nonviolent protesters end up tear-gassed and shot at. This is part of why violence is so often the first resort of cops dealing with any sort of tricky situation, rather than the last. The idea that we need our cops to be the heavily armed soldiers of the streets -- instead of, say, social workers with the power to arrest -- leads to bad recruiting, bad training, unnecessary deaths, mass distrust of the police by vulnerable communities, and the contemptuous feeling of many cops that they themselves are above the law.

The authors identify 9/11 as the start of this trend. But I agree with Reason magazine that it actually all started with the war on drugs. Radley Balko did the essential research on the subject a few years back, and most paramilitary police actions that end up going horribly wrong are anti-drug raids. The Patriot Act itself is routinely used to fight the drug war. The argument that these tactics are necessary to keep us safe from scary foreign terrorists falls apart when you see how often all this firepower is directed at Americans looking only to get high or make a buck getting someone else high.