The awesome, thrilling spectacle of ... Vietnam? 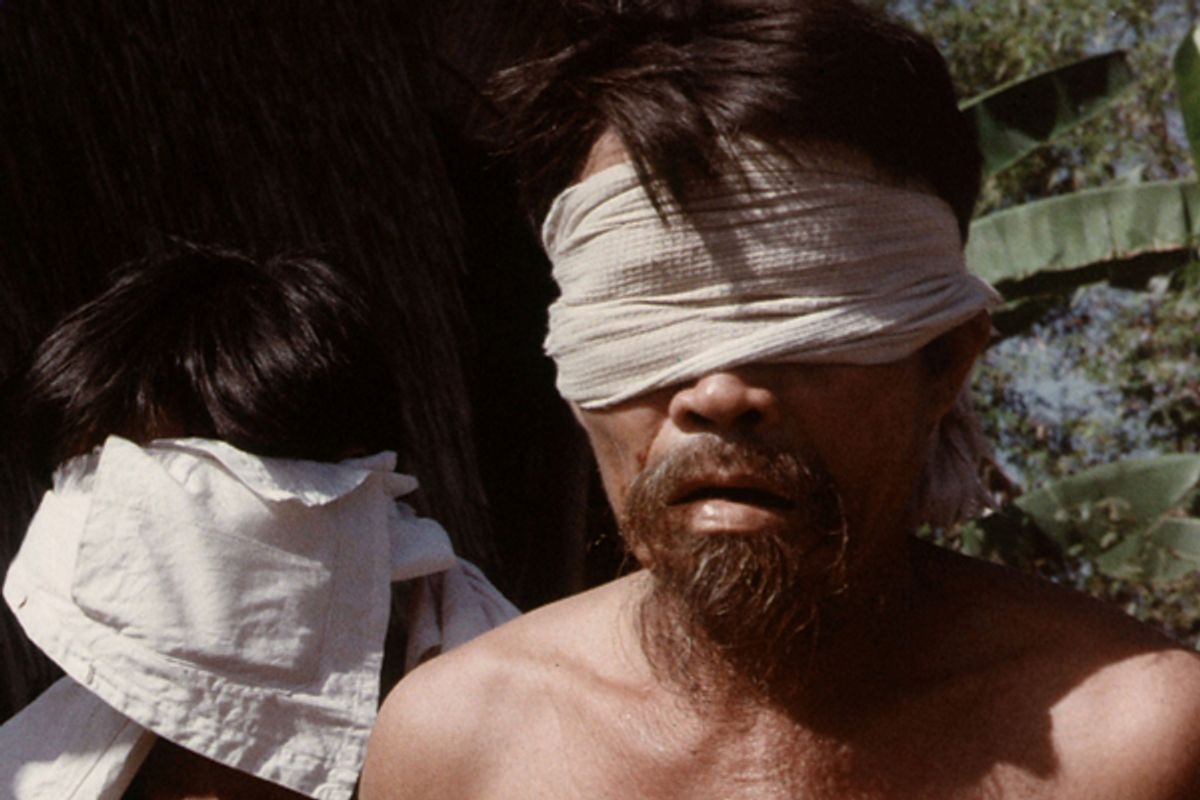 Before I review "Vietnam in HD," the six-hour History Channel epic, I need to get a couple of caveats out of the way.

First, if you have a high definition television, access to the History Channel's HD signal, and a killer home stereo system, you should record the series and watch it in a dark room with no interruptions, preferably while indulging your inebriating substance of choice. It's a sound and light show extraordinaire -- a trip.

But you should only do this if -- and here comes caveat No. 2 -- you consider intense, often shockingly bloody documentary images to be just another thing to gawk over; something to toss up on a big screen instead of, say, "Sucker Punch" or "The Dark Knight" or "The Dirty Dozen." Judged purely as a technical achievement, "Vietnam in HD" (Nov. 8-10, 9 p.m./8 Central) is impressive. It merges thousands of bits of footage collected via the History Film Corps into a nearly seamless whole -- a roiling canvas of chopper evacuations, napalm strikes, city and jungle infantry skirmishes, and shots of wounded and dead soldiers with burned and mangled flesh. And it weds these images to the narratives of individual American soldiers who served in different phases of the war, from the early advisor stage (roughly 1961-1964) through the peak of infantry combat (1965-1969), the post-Tet Offensive period of "Vietnamization" and the fall of Saigon. (I've previewed the first four hours; the last two, "A Changing War"/"Peace With Honor," weren't available for critics.)

But at the same time, as technically overwhelming as this project is, there's something unsatisfying about it. The first U.S. advisors went into South Vietnam 50 years ago, and the war officially ended in 1975. With two protracted, costly and in some ways Vietnam-like wars finally trudging to a close -- wars that happened despite three decades' worth of anguished books, films and TV series warning us "Never again" -- viewers have a right to expect more than a bigger, shinier version of the official narrative: "Once upon a time, a really bad thing happened to us." "Vietnam in HD" is told almost entirely from the American point of view, avoiding the war's domestic and international political context save for sporadic mentions of the domino theory and body counts and civic unrest and the like. It gives you the macro view (the timeline of U.S. involvement) and the micro view (first-person witnesses) but offers little in-between. And it's what a filmmaker does with the in-between that distinguishes a great war movie, or war documentary, from a merely effective one; in-between is the place where texture happens and unique choices are made.

Viewers of a certain age might remember the 1987 HBO documentary "Dear America: Letters Home From Vietnam," based on Bernard Edelman's 1985 book. It was a huge success because it pointedly avoided politics, addressing Vietnam mainly in terms of brotherhood, survival and lost innocence. "Vietnam in HD" takes a somewhat similar approach to its subject, but its narrators all lived to tell their tales. And in place of the 1987 documentary's muted montages suggesting war experience recollected in tranquility, we get a more immediate, visceral version, with richer greens, muddier browns and bloodier reds, and a soundtrack layered with studio-pristine combat noises. "Vietnam in HD" even dubs the sounds of flashbulbs and rustling papers into presidential press conferences, and adds radio chatter, agonized screams and the clink-clink of spent shell casings to combat scenes. It's "Dear America" bulked up into a blockbuster. It's a kind of spiritual sequel to "World War II in HD," the 2009 series whose tag line was, "The only ones to see the war like this are the ones who lived it." That tag line was questionable, and this Vietnam follow-up's tag line -- "It's not the war you know, it's the war they fought" -- is problematic, too. These HD war epics look and sound fantastic, but they are not lifelike. For the most part, their visual language is that of Hollywood war movies -- more specifically, war movie trailers -- not war documentaries.

Individual sequences -- such as the recounting of 1965's battle of Ia Drang, the first major face-off between American ground troops and the North Vietnamese army -- are engrossing, horrible and sad, but in the way that parts of "Platoon" or "Saving Private Ryan" are engrossing, horrible and sad. You get a flurry of quick-cut motion -- Americans firing machine guns, dirt flying, men screaming, choppers taking off or landing, jets howling in and torching acres of jungle, all backed by dramatic orchestral music or period-appropriate pop songs, and narrated by whatever real-life witness is serving as our anchor during that part of the story. Sometimes the show's uber-narrator, Michael C. Hall, yields the stage to an individual celebrity narrator (say, Adrian Grenier from "Entourage" or Blair Underwood from "In Treatment") who's there to read a letter or news story or official dispatch that a witness wrote while young; then that narrator's voice will merge with the voice of the actual subject, who is now in his or her 50s or 60s. It's all cleverly done, and too busy by half. In a superficial sense, "Vietnam in HD" respects its witnesses and its topic, in that it approaches both with a sober, compassionate attitude. But in another sense, it's disrespectful, because it treats its testimony and its rare archival and home movie footage as raw material -- as data to be manipulated into a fast-cut montage, then remixed and underscored until it feels like a Hollywood war picture.

The most affecting and memorable parts of "Vietnam in HD" fall under two headings: quiet recollections by witnesses (some of whom break down in tears as they remember traumatic moments) and bits of footage that aren't chopped up for use in a montage but that are instead allowed to linger on-screen, minus nervous cutting or background music or narration to "help" the moment along. These rare moments when "Vietnam in HD" pauses to breathe and reflect are so striking that they made me wish I was seeing a less sprawling and technically ambitious program, one that had more faith in the iconic power of lined faces paired with scratchy fragments of film.

I suspect that we might have gotten a more vivid sense of what it was like to fight in Vietnam from hearing Barry Romo of the 196th infantry describe the sights, sounds and smells of the place, followed by a long chunk of footage showing young men in camouflage gear moving through tall grass or thick jungle, looking around nervously for signs of the enemy, with the same hissy monaural soundtrack that was on that bit of footage originally, before the History Channel's sound designers went in and "rebuilt" it to Dolby Digital standards.  The historical footage in "Vietnam in HD" is often scratched, faded, warped or burned -- a visual touch that signals, "This is the unvarnished truth."  But what you're actually getting is a more polished, hyped-up version of the same-old, same-old: Vietnam, the six-hour trailer.