The bleak face of U.S. poverty

No matter how you slice it, the new census numbers show the last decade has been a disaster 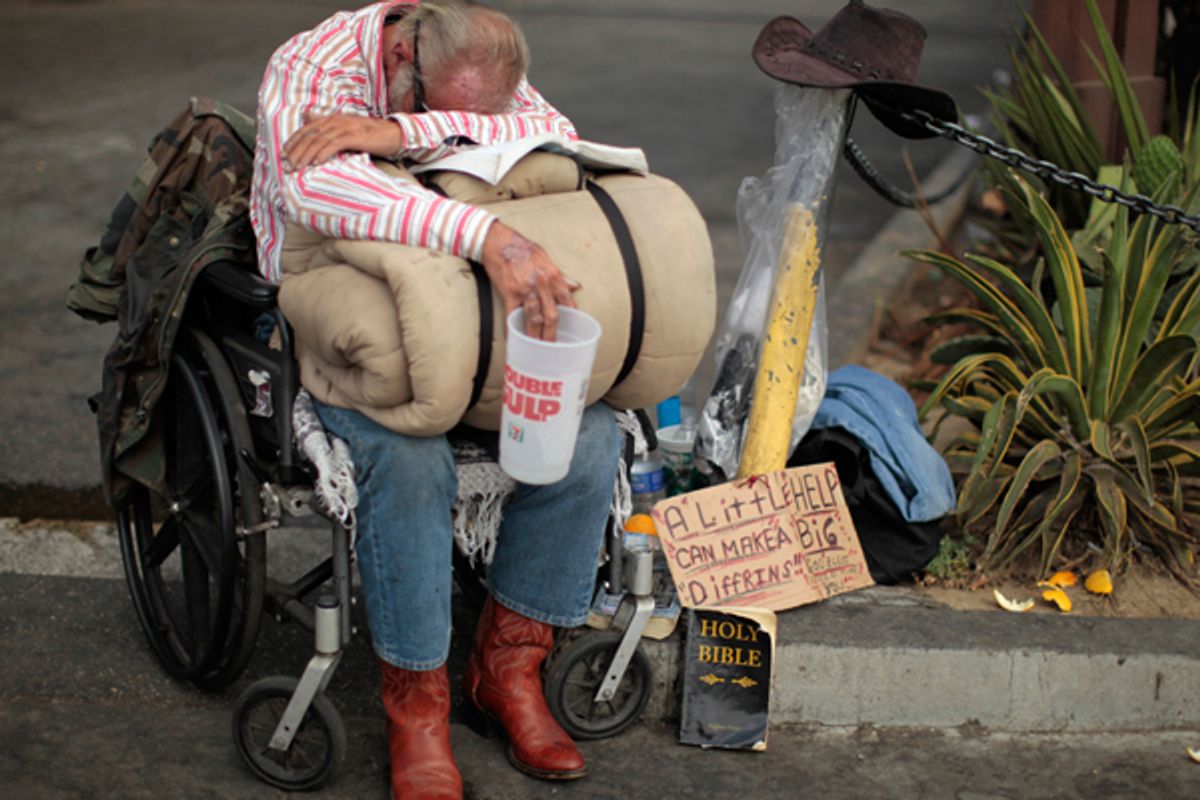 "Bleak Portrait of Poverty Is Off the Mark, Experts Say," blared the Friday headline in the New York Times. The traditional strategy for measuring poverty, we were told, did not include the benefits of federal programs like food stamps and tax credits that were helping to keep Americans above the poverty line. A new, "supplemental measure" from the U.S. Census that took such factors into account would reveal that many Americans thought to be living below the poverty line were actually above it -- "as much as half of the reported rise in poverty since 2006 disappears," declared the Times.

I discussed the likely political implications of this rejiggering in my last post. But on Monday the census unveiled its report, and a first look at the numbers suggests that the Times' preview was a bit off-base. According to the census's new interpretation of the numbers, the total number of people living in poverty America is higher than the traditional approach indicates.

We can slice the data in all kinds of different ways to account for the change. There are fewer children living in extreme poverty, for example, while a much higher number of seniors have slipped below the poverty line. But the key point explaining the discrepancy between what the Times predicted and the census has revealed is this: The new supplemental measure does not just take into account the positive effects of tax credits and food stamps, it also calculates the negative effects of paying for childcare, out-of-pocket medical costs, geographic differences and a rising overall standard of living. Out-of-pocket medical costs alone outweigh the helpful effects of either the food stamps or the Earned Income Tax Credit programs.

One conclusion is inescapable: The sorry state of healthcare in the United States is driving aging Americans into indigency. As the nation continues to get older, that problem is only going to get worse.

A new report from the Brookings Institution, "The Re-emergence of Concentrated Poverty," delivers more bad news.

After declining in the 1990s, the population in extreme-poverty neighborhoods -- where at least 40 percent of individuals live below the poverty line -- rose by one-third from 2000 to 2005–09 ... The slower economic growth of the 2000s, followed by the worst downturn in decades, led to increases in neighborhoods of extreme poverty once again throughout the nation, particularly in suburban and small metropolitan communities and in the Midwest.

The growth of high-poverty clusters is distressing, no matter how one strives to recrunch the data. Concentrated poverty breeds on itself -- schools deteriorate, businesses move away, crime rises, creating a negative feedback loop that makes it ever more difficult to restart economic growth.

The Brookings report illuminates the changing face of poverty in America. Residents of the new extreme-poverty neighborhoods are more likely to be white and less likely to be Latino than a decade ago. Poverty is increasingly a suburban phenomenon; "new clusters of low-income neighborhoods have emerged beyond the urban core in many of the nation’s largest metro areas."

Paradoxically, that news might be the most encouraging part of the report. Now that extreme poverty can no longer be "ghettoized," perhaps there will be a growing political consensus that something needs to be done.

What exactly to do, however, is a knottier question.

It is also unlikely that without fundamental changes in how regions plan for things like land use, zoning, housing, and workforce and economic development that the growth of extreme-poverty neighborhoods and concentrated poverty will abate. With cities and suburbs increasingly sharing in the challenges of concentrated poverty, regional economic development strategies must do more to encourage balanced growth with opportunities for workers up and down the economic ladder. Metropolitan leaders must also actively foster economic integration throughout their regions, and forge stronger connections between poor neighborhoods and areas with better education and job opportunities, so that low-income residents are not left out or left behind in the effort to grow the regional economy.

In an era where large swaths of the population and one major political party believe that government is the problem, not the solution, it's hard to see how we are going to make progress on progressive zoning and land use issues, not to mention regional economic development strategies. But there's one thing, at least, that we should know by now, not to do: cut the programs that are currently keeping Americans above the poverty line.

The Center on Budget and Policy Priorities uses the newly released "supplemental measure" data to further emphasize the value, not just of the safety net as a whole, but of the specific agenda pushed through by President Obama to alleviate the impact of the Great Recession.

Six temporary federal initiatives enacted in 2009 and 2010 to bolster the economy by lifting consumers' incomes and purchases kept nearly 7 million Americans out of poverty in 2010, under an alternative measure of poverty that takes into account the impact of government benefit programs and taxes. These initiatives -- three new or expanded tax credits, two enhancements of unemployment insurance, and an expansion of benefits through the Supplemental Nutrition Assistance Program (SNAP, formerly called food stamps) -- were part of the 2009 Recovery Act. Congress subsequently extended or expanded some of them.

In other words, without the Obama stimulus, millions more Americans would be under the poverty line.