How the rich rig the system

From low capital gains taxes to stock buy-backs, here are the ways the elites ensure the markets benefit them 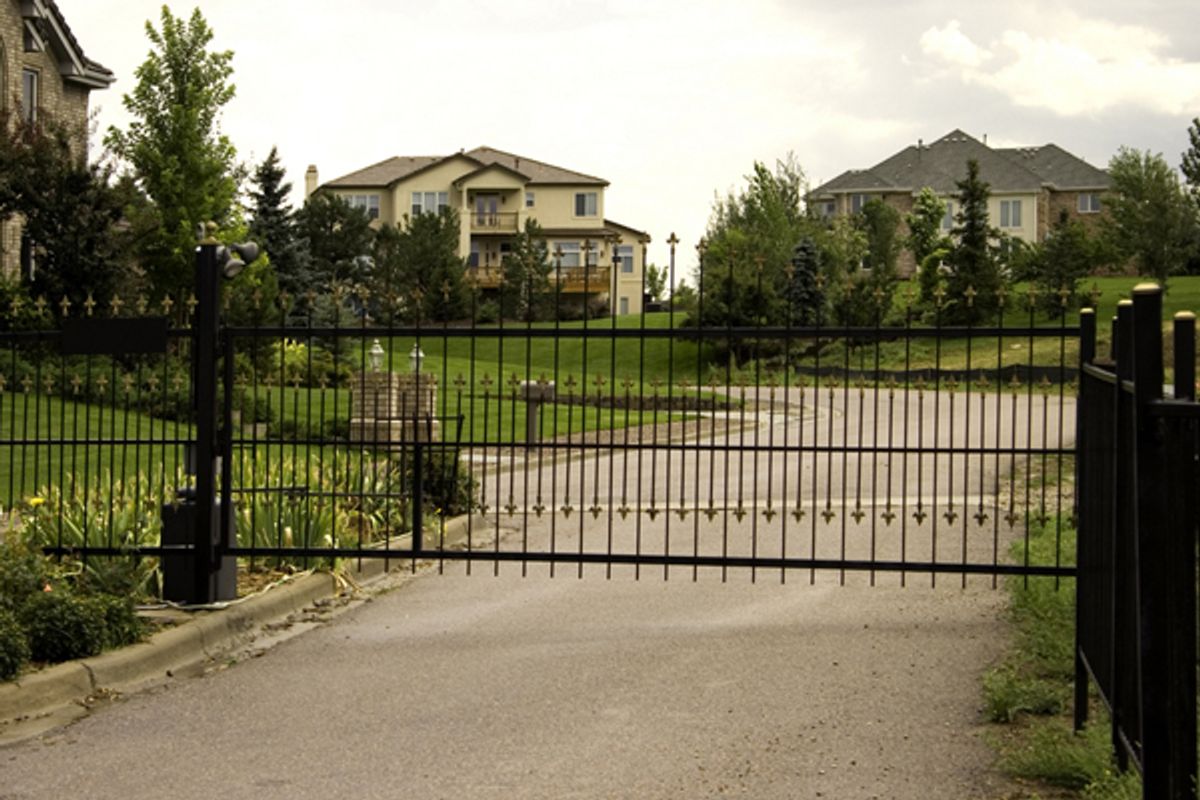 Here are three of the many ways that markets for compensation are rigged to benefit not only the top 1 percent but also the top 10 percent, a group that includes many well-paid professionals:

Financial sector compensation. By now the phrase “too big to fail” has become so familiar that it is known by its acronym: TBTF. What needs to be emphasized is that TBTF is the basis for the huge bonuses paid to elite American bankers who benefit from a government that socializes their losses while allowing them to keep their profits.

Here’s their business model: “We place highly leveraged bets, sometimes as much as 35 or 40 to 1. In return, the government implicitly agrees to bail out our banks, and if we’re fired, we’ve negotiated sweetheart deals with golden parachutes. If we bet right, then our banks keep the windfall profits and we get big bonuses. If we bet wrong, not to worry -- the taxpayers will bail out our banks and the government will pay for the cost of the bailouts by cutting Social Security and Medicare. Suckers!”

While TBTF rigs pre-tax income for financial elites, American tax law rigs their after-tax income to their benefit. In the 1980s, capital gains tax rates were equal to income tax rates. But then in the 1990s Clinton and the Republican Congress lowered the capital gains rates. So billionaires who derive most of their money from their investments and savings pay taxes at a lower rate than the majority of Americans, who, like Warren Buffett’s proverbial secretary, rely on their labor income.

Andrew Mellon, who dominated American economic policymaking as treasury secretary in the 1920s during the administrations of Harding, Coolidge and Hoover, was denounced by the liberal reformers of his day as the embodiment of plutocracy. But here is what he had to say about taxing capital versus wages in his 1924 book, “Taxation: The People’s Business”:

The fairness of taxing more lightly income from wages, salaries or from investments is beyond question. In the first case, the income is uncertain and limited in duration; sickness or death destroys it and old age diminishes it; in the other, the source of income continues; the income may be disposed of during a man’s life and it descends to his heirs.

Surely we can afford to make a distinction between the people whose only capital is their mental and physical energy and the people whose income is derived from investments. Such a distinction would mean much to millions of American workers and would be an added inspiration to the man who must provide a competence during his few productive years to care for himself and his family when his earnings capacity is at an end.

To which today’s conservatives, no doubt, would reply: “Andrew Mellon was a liberal!”

CEO compensation. In the last generation, American CEOs have been much better paid than their European and Asian counterparts, without having done remarkably better jobs.

American CEO compensation is rigged with perfect legality by two practices. The first is allowing the compensation of CEOs to be determined by boards of directors, whose members are frequently cronies of the CEO. Well-paid cronies, in many cases. You can be paid hundreds of thousands of dollars a year for attending a few board meetings and rubber-stamping whatever your friend the CEO wants. When the Sarbanes-Oxley Act sought to impose more responsibility on board members, this was denounced as an assault on the foundations of free enterprise. Freebie enterprise, is more like it.

CEO compensation is also inflated by the practice of stock buy-backs. Several decades ago, the practice of rewarding CEOs with company stock options was supposed to improve the performance of their companies and of the American economy as a whole. That worked out well, didn’t it?

American companies routinely and legally drive up the prices of their stock by buying back shares in the stock market. This is the equivalent of a celebrity author buying mass quantities of his or her own book, in the hope of driving it up best-seller lists. Stock buy-backs do not strengthen the company or lead to innovation. They merely inflate the wealth of the CEO and other company employees who are paid with stock options.

Long-term shareholders might object, but they are a dying breed. Most shareholders want to maximize the price of stocks before they cash out by selling them to the proverbial “greater fool.” Thanks to buy-backs, stock options have aligned the interests of CEOs and shareholders -- but at the expense of prudent, long-term investment in American companies and American industries.

The professions are guilds. To put it another way, they are the most powerful unions in America. They are unions for the affluent. They rig labor markets the way that guilds have always done -- by preventing anybody who doesn’t belong to the guild from practicing the trade.

In most states of the Union, you can’t practice law or medicine without both passing exams and possessing a medical degree or a law degree. In the early 20th century, law was an undergraduate degree. Then law schools began requiring four-year college education as a prerequisite, in order to keep the lawyer labor market tight by weeding out Americans who can’t afford at least seven years of higher education.

While raking in rents from their credentials, America’s affluent professionals are delegating more and more of their work to poorly paid subordinates -- nurses and health aides, paralegals, adjuncts. While gouging students and parents with high tuitions, today’s universities and colleges assign more and more teaching to “freeway fliers” -- often graduate students paid near-poverty wages or affluent professionals who teach as a hobby. God forbid that a well-paid, tenured professor should have to teach undergraduates, instead of jetting to conferences in luxury hotels.

Note that none of these methods of rigging the market to artificially inflate incomes -- TBTF, stock buy-backs that drive up stock options, the professional credentials cartel -- can be blamed on capitalism or markets. There are still genuine entrepreneurs who get rich by founding companies that provide new and useful goods and services, and there are still genuine capitalists who get rich by investing in them. But getting rich the old-fashioned way by getting customers to buy what you sell is hard, compared to paying politicians to rig markets and tax policies in your favor.

Once upon a time, rigged market capitalism in America benefited the many, and not just the few. Between the 1930s, the New Deal raised the wages of working-class Americans by rigging labor markets in their favor. From the 1920s the New Dealers inherited a system of low immigration, which lasted until the 1970s and helped to create tighter labor markets at the bottom. The black Southern poor who moved North in the Great Migration benefited disproportionately when jobs were opened up for them by the cutoff of mass European immigration.

The New Deal’s minimum wage and maximum hours legislation helped millions of the working poor to join the working class or middle class. And liberal New Deal Democrats promoted unions in peace and war, with the result that by the 1950s about a third of the private sector workforce was unionized (today it is less than 7 percent).

Beginning with Ronald Reagan, the U.S. government has systematically derigged labor markets for the many while rigging compensation markets even more for the elite few. Mass immigration, including mass illegal immigration, resumed after the 1960s, lowering wages for the poorest workers and weakening the ability of unions to organize. In the late 20th century, Congress allowed inflation to erode the real value of the minimum wage. Even after several increases, it is still lower, in real terms, than it was in the 1960s. And having effectively destroyed private-sector unions, the right is now trying to eliminate public sector unions, on the theory that schoolteachers and emergency responders are a much greater threat to the American economy than the reckless bankers who created a near-Depression and the CEOs who are rewarded for offshoring one industry after another.

What is rigged can be derigged; that is the lesson of the derigging of the institutions that raised the incomes of the American middle and working classes, between the Great Depression and the 1980s. TBTF can be eliminated, either by allowing giant, interconnected financial institutions to fail, or, more realistically, by turning them into tightly regulated public utilities that don’t make risky bets. CEO compensation practices can be reformed by law. Corporations are creations of the governments that charter them, and charters can contain any rules that lawmakers choose to put into them. And the rents extracted by the academic-professional complex can be reduced, by lowering the barriers to entry to the professions or, more radically, by reorganizing medicine, law and university teaching so that they are no longer structured as trades run by medieval guilds.

Of course, to succeed, this agenda has to be promoted by politicians, many of whom are members of the credentialed professional guilds, dependent on campaign donations from financial and corporate elites whose compensation depends to a large degree on markets that are legally rigged.