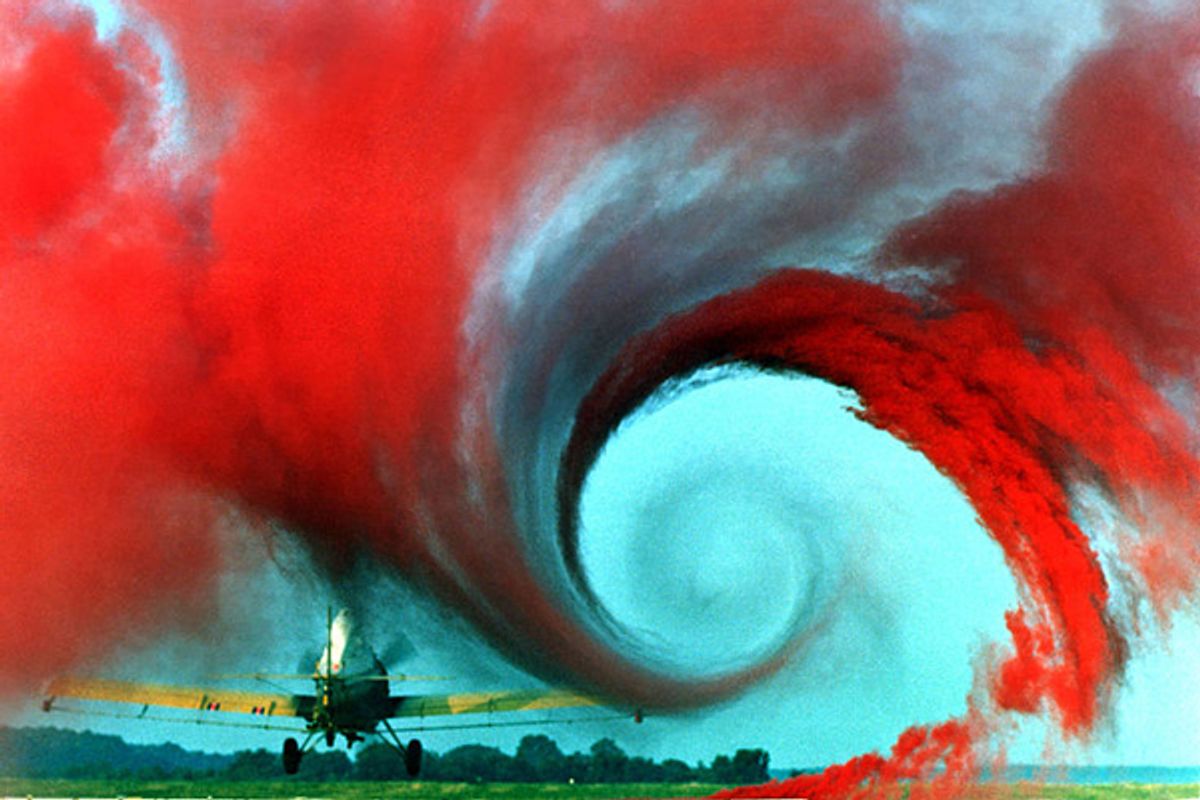 The air flow from the wing of this agricultural plane is made visible by a technique that uses colored smoke rising from the ground. (Wikipedia/NASA)
--

Not to dwell on the aesthetics/livery thing any more than I already have, but a quick observation: How tacky are the "AA.com" advertisements plastered on the winglets of American Airlines planes?

Winglets, if you're unfamiliar, are those finlike projections at the tips of the wings, and certain carriers have taken to plastering logos or Web addresses on them -- usually on the inside-facing portion, visible through the cabin windows. The space is too constricted to be used this way. Delta, among others, does it right, giving each winglet a simple coat of the same handsome blue used in the rest of its livery.

For that matter, all references to Web addresses ought to be banned from all parts of a carrier's livery. Like somebody might not know that airlines have their own websites where people can check out flights and book tickets.

Of course, the only thing more unnecessary that a URL splattered across a winglet or fuselage are those cases where a carrier's entire identity is oriented around the Internet. In Brazil, now, there's something called WebJet. It's a 737 operator based out of Rio, though with a name like that it may as well exist solely in cyberspace.

Or worse, remember Mexicana's "Click" subsidiary? That's right, Click. "I'm flying Click from Monterrey to LAX." (Or you were flying Click, since last year's unfortunate demise of Mexicana, which was one of the three oldest airlines in the world, took Click down with it.)

Best I can tell, the intent was to evoke the sound one makes while conveniently booking his or her ticket online. Logical, but still stupid.

Hungary's Wizz Air reminds us of a sound also, though probably not the one the company has in mind.

Wizz Air. Like "underwear bomber," we're expected to say that without irony, with a straight face? What next?

And I'm curious: Is commercial aviation the only big industry that has, with certain exceptions, all but given up on presenting itself with dignity? Everything is so downmarket and cheap and gimmicky these days, from liveries and logos to staff uniforms to the very names of airlines themselves.

All right, now that I've brought up winglets, I'd better do some tech talking about their purpose. Winglets have been discussed previously in this column, but it's been a long time and if I don't reexplain them I'm going to be deluged with letters. What are they for?

At a wing's tip, the higher pressure beneath the wing meets the lower pressure above it, sending out a turbulent discharge of air. Winglets, as they're affectionately called, help smooth this mixing, decreasing drag and, in turn, improving range and efficiency. You see them in different forms. Some are large and jaunty while others are just a tweak. With a "blended winglet," as it's known, the wing tapers almost seamlessly into an upturned fin, with no harsh angles. Newer planes like the 787, 747-8 and the soon-to-come Airbus A350 use a more integrated style, sometimes referred to as a "raked wingtip."

Because planes have different aerodynamic fingerprints, winglets aren't always necessary or cost-effective. For instance, the 747-400 and A340 have them, while the 777 does not, even though it too is a long-range widebody. Because the advantages of winglets weren't recognized until fairly recently, older models were designed without them. For these planes -- a list that includes the 737, 757 and 767 -- they are available as an option or retrofit. An airline considers if the long-term fuel savings is worth the cost of installation (millions of dollars per plane usually). It depends on the flying. In Japan, Boeing has sold a number of 747s, used specifically on domestic routes, with winglets removed. There's no real efficiency gain on such short-range pairings, and meanwhile the plane is lighter and easier to maintain.

Aesthetics are a personal thing. I find winglets attractive on some planes, like the A340, and awkward on others, like the 767.

Another thing winglets do is dissipate the strength of the rotating vortices that spin from a wing's tip. These vortices, trailing behind the aircraft like horizontal tornadoes, can be very powerful and sometimes dangerous to nearby planes. The full story on this phenomenon, also known as "wake turbulence," including links to some amazing photos and an account of my own frightening run-in with a vortex, can be read here.

When humidity levels are high you can sometimes see the condensed inner cores of these vortices, writhing through the air like long gray snakes (people sometimes misunderstand this to be jettisoned fuel). But what's even cooler is that you can sometimes hear them from the ground.

You need to be very close to a runway -- preferably within a half-mile of the end. The strongest vortices are produced on takeoff, but ideally you want to be on the landing side, as the plane will be nearer (i.e., lower) at an equivalent position from the threshold. A calm day is ideal, as gusts will dissipate a vortex before it reaches the ground. About 30 seconds after the jet passes overhead you'll begin to hear a whooshing, crackling and thundering. It's a menacing sound unlike anything you've heard before.

As a general rule, bigger planes produce a bigger wake, but the plane to look for is a non-wingletted Boeing 757. (Many 757s have been retrofitted with vortex-reducing winglets, but many have not.) Due to an aerodynamic quirk that nobody fully understands, the medium-size 757 produces the most powerful wake of any airplane ever recorded.

See -- or hear -- for yourself in this footage captured a few weeks ago on my iPhone.

It was taken at the Belle Isle Marsh Reservation, a popular bird-watching spot about a half-mile north of runway 22R at Boston's Logan International Airport. The plane is a straight-wing (no winglet) American Airlines 757. Excuse the atrocious video quality, but the sound is acceptable and that's the important thing. You begin to hear the vortices at 0:45, and they continue pretty much to the end. Note the incredible gunshot-like noises at 0:58.