At the most confrontational occupation, debate turns to violence and resistance 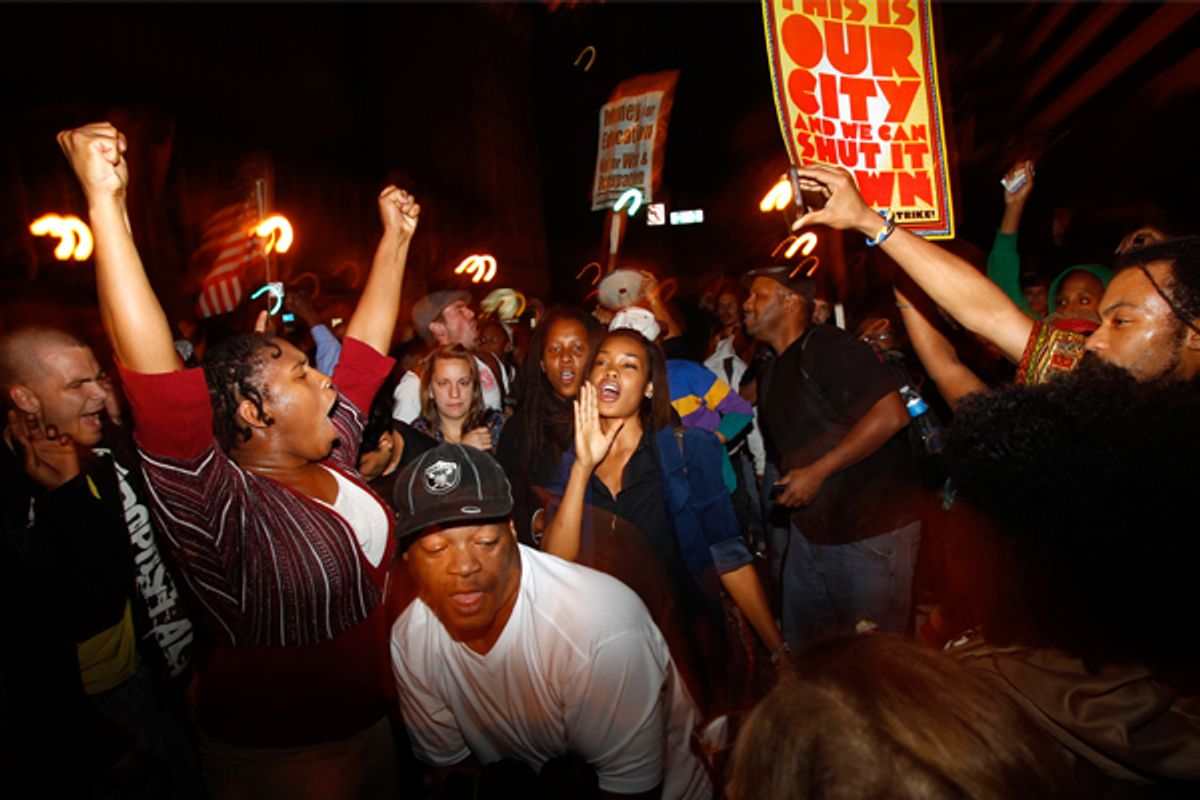 OAKLAND, Calif. -- This working-class city has a history of aggressive civil and labor rights action. From the 1946 General Strike to the emergence of the Black Panthers in the 1960s, to Occupy Oakland today, this is a city that has not shied from confrontation with the powers that be. There is a strain of  civic pride that is infused with memories of resistance in the face of oppressive circumstances.

Last week's intensive media coverage of clashes between police and demonstrators by Salon and others was certainly not the first time that the aggressive actions of Oakland protesters have overshadowed their message. But reporters who have done more than sit on the edge of the camp in news vans, sipping lattes, and waiting to be cued by flash-bang grenades, know that the  ideology behind the “violence” -- a term that makes most Occupy Oaklanders bristle -- is more nuanced than is usually presented in mainstream news coverage.

In a wide-ranging discussion with Salon, several occupiers, most of whom identified themselves as anarchists, talked about tactics of resistance. They say police brutality has been undercovered. The whole country knows the story of Scott Olsen, the Iraq war veteran whose skull was fractured by a riot cop on the first night of gassing and bullet sprays; but Olsen is not the only one who experienced police brutality.

On the second night of police-protester clashing, Kayvan Sabehgi, another veteran, was beaten until his spleen was lacerated. He spent 18 hours on the jail cell floor, reported the Guardian, before he was finally taken to the hospital.

The occupiers tell stories of people whose hands were broken by police batons, and others who were struck by rubber bullets. I was thrown to the ground because I was trying to photograph police activities. To add to the culture of mistrust, some cops concealed their names and badge numbers after being accused of infractions.

“Interpretations of violence come from people’s experiences,” said a young black-clad anarchist with mohawkish dreads and gentle eyes. “People who didn’t grow up with a lot of violence are going to have a different definition than people who grew up defending themselves.”

The man -- who prefers to go unnamed -- is friendly and reflective. He takes late-night shifts on “cop watch,” a cadre of patrols who alert the camp when cops are spotted in riot gear or in large numbers.

Like occupiers who won’t willingly allow cops on the Plaza, many in Oakland -- inside and outside the camp -- say they feel more fear than safety when cops are around.  That may be hard for some people to understand, but in Oakland the memory of Oscar Grant is strong. In January 2009,  Grant, a young man from Oakland, was arrested at a BART station. While being forcibly restrained by police, the unarmed Grant was shot to death. Police said Grant was resisting arrest, a claim disputed by witnesses. Grant's  wrongful death brought enraged locals swarming into the streets, marching and breaking windows.

“We should be proud of people that stood in the face of the violence of the state," said one Black Panther at Occupy Oakland who speaks in a fatherly way about foolhardy youthful romanticism. “At the same time, we mustn’t be fooled that we should be prepared to face the state head on.”

“The whole theory of nonviolence is that the state has the monopoly on the potential use of violence,” said John Reimann, who describes himself as a labor activist. And that threat, says another anarchist/occupier, Michael Spencer, is all based in fear.

Spencer is an organizer of Occupy Oakland who teaches other campers about the facilitation and consensus process of the General Assembly, the governing structure of the Occupy movement.  He says the very existence of the police force is a threat of violence.

“That threat is the backdrop of what the law is,” he explained.  "You don’t steal something because you know the cops will come whack you. They have assault weapons in their trunks. People in Oakland know that better than anyone else.”

While most considered last week's window-breaking and barricade-burning “out of line,” they also described the protesters’ actions as vandalism, not violence.

“Property damage is not violence,” said Spencer with a frown. “The reality was, no cops got hurt. It looks like more than it was. They were just burning shit in the street.”

The experienced occupiers attributed the incident to frustrated youth who don’t know how to deal with their anger at injustice and have never lived through a time of class struggle.

“You’ve not had a big movement of the working class for the last 30 or 40 years," explained Reimann, "and there are people who want to see the whole system shaken up. It's difficult to see where the force can come to shake up the system. But it is that layer of youth that are so angry at the capitalist system that are needed in the workers' movement.”

All of those I spoke with, except one, believe there may be a time for aggressive tactics in the occupation movement, but the time is not yet.

“I think we should look at it as what helps to inspire workers and make them more inclined to get involved,” counseled Reimann in good socialist style. “That should be the basis on which we determine our tactics.”

One protester resisted  the idea of using violence.

“The movement is an indictment of violence and coercive means by which society is controlled,” explained Kevin Skipper, who has been camping and participating since the beginning of the occupation. “So if we use those same means to protest, it doesn’t make [the message of] what we’re protesting any less true. It’s just a missed opportunity to demonstrate an alternative.”

Such is the debate at Occupy Oakland.