The big tease of "Glee" 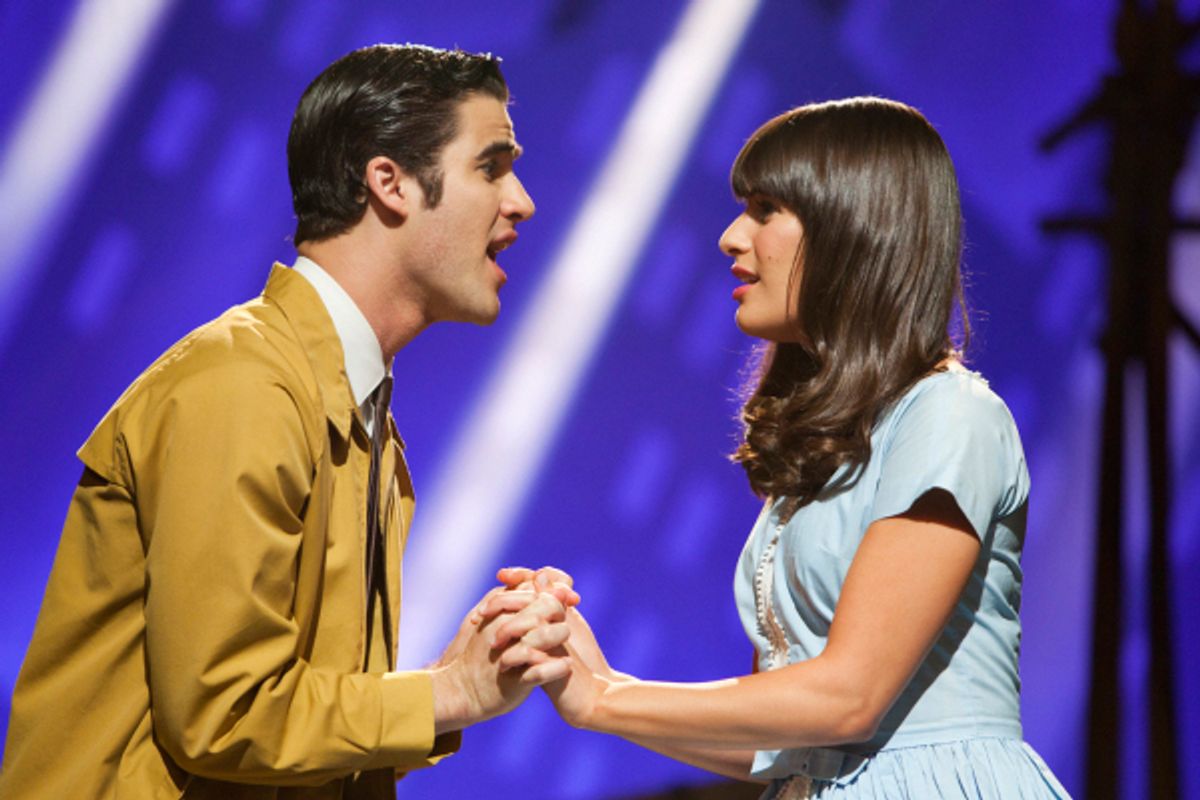 The following recap of "Glee" season three, episode 5 contains spoilers; read at your own risk.

Really, "Glee"? Was it really necessary to end an episode revolving around virginity loss with a shot of a roaring fireplace?

That's a trick question. Midway through its third season there's little that's necessary about "Glee," save for the underused Chris Colfer's performance as out gay teenager Kurt Hummel, the even more severely underused Mike O'Malley's performance as his dad, one out of every five musical numbers, and Sue Sylvester's surreal rants, which Jane Lynch sells even when the writing is just sassy word salad. And even those compensatory values aren't enough to make me watch each week. After a long and increasingly desperate infatuation with this musical comedy soap -- which repeatedly threatened to be astonishing and sometimes delivered, only to settle for cheerfully incoherent inanity at least 80 percent of the time -- I've relegated it to the second tier of my DVR, which consists of shows that I skip for weeks at a time, then catch up on in one dutiful burst. I doubt I would have watched this installment in real time if my 14-year-old daughter hadn't reminded me that it promised to deliver big moments this week. Her reactions were more entertaining than the show. She contrived reasons to leave the room whenever nooky threatened to break out, and ended up watching the parts she'd skipped while I was in the next room writing this recap. "If you were 14, would you want to watch this episode with your dad?" she asked later. Hell, no. I vividly recall being in the same tiny house with my mom while she watched "The Postman Always Rings Twice" on cable with the sound cranked way up, but only because my therapist dug that repressed memory out through hypnosis and primal scream therapy.

But as my tombstone will one day read, I digress. Sue was absent this hour, which was imaginatively titled "The First Time," and that was a good thing for her as well as us. As written by Bradley Buecker and directed by Roberto Aguirre-Sacasa Robe (deep breath), this episode was stuffed to bursting. None of the characters -- even theoretically important ones -- got much time to shine, or even behave like plausible humans. It was an end-of-innocence roundelay, with a capper to Mike's "Asian F" story line awkwardly shoehorned in. (Really, "Glee"? You actually wrote and aired an "I have no son!" scene?)

After threatening to devirginize many of its major characters eons ago, "Glee" pretty much had to get down to business tonight, but that didn't stop it from teasing the audience with false carnal starts. Finn wisely rejected Rachel's advances when it became clear she only wanted to sleep with him so that she could better understand the sexual awakening of Maria in "West Side Story." (Like it's better to let yourself be deflowered because your boyfriend is depressed? What a piece of work is Rachel.) Kurt rightly rejected Blaine's plea to be "spontaneous" in the parking lot of Lima's only gay bar after Blaine spent most of the night flirting with a devilishly handsome Dalton student named Sebastian, who has been to Paris and had anonymous sex at a nightclub once. Why is Blaine, an emblem of young Midwestern gay male confidence last season, playing hard-to-get with Kurt this year and acting awestruck by poseurs like Sebastian? Because it's "Glee," where characters become whatever the plot requires them to be, consistency be damned.

The decision to tactically delay all nooky until the final montage -- effectively blue-balling the viewers -- was the only aspect of this episode that could be called clever, but only if we mutually agree that "clever" is a synonym for "not totally lame," which the rest of the hour surely was. This otherwise verbally frank and sometimes physically raunchy series turned weirdly chaste in its final minutes, showcasing its newly coupled pairs post-coitus, fully clothed and gazing dolefully into each others' eyes like 19th century Amish settlers after a long night of bundling.

Coach Beiste and Finn each had unexpectedly strong, tearful moments in which they admitted their deepest fears -- respectively, Coach's belief in her unattractiveness, and Finn's fear of being mediocre for the rest of his life. Finn and Rachel and Kurt and Blaine got do do the horizontal bop at the end (though not all together, alas). We didn't find out if Coach actually got it on with a good-looking recruiter named Cooter, but he did convince her to dress up in lady clothes and go on a date with him -- a date that presumably included attending the glee club's performance of "West Side Story."  (There was once a recruiter named Cooter/Who fancied himself Coach Beiste's suitor/He plied her with roses/And charm, one supposes/And proved he knew how to salute her.) Digression!

I was moved by the big numbers for reasons that have little to do with the numbers themselves.  I love "West Side Story." I'm inclined to support any staunchly gay-friendly prime-time musical fantasy on general principle, especially one that believes in the arts as a great unifier -- a sentiment that cuts through the prime-time gloom like a ray of light even when individual episodes reek. And this one was pretty fragrant. Naya Rivera's Santana isn't the world's greatest singer, but she killed as Anita, and Artie's choreography seemed atypically restrained and classy for "Glee"; but I wouldn't swear to either statement because the auto-tuning and fast cutting make all praise for talent suspect. For the most part, "The First Time" amounted to one poor judgment call after another. This episode amounted to a gross misuse of a great musical, an American classic whose thematic richness could have been mined in far more direct and organic ways. In comparison, that atrocious "Rocky Horror" episode was a misdemeanor. I have to assume Stephen Sondheim didn't see this installment; if he had, we would have heard about it by now, because the combination of bad singing, bad dancing and horribly forced juxtapositions of "West Side Story" numbers and "Glee" moments would have set him straight to the nearest emergency room, where doctors would have labored furiously to un-stick the eyeballs that had rolled back into his skull.

And the fireplace. The fireplace! Have none of the writers seen "Top Secret!," which features the greatest fireplace "discretion shot" of all time? Or maybe they have seen it, and this is their way of reclaiming the fireplace shot and making it pure again? Were we seeing a bold attempt to revirginize a visual cliche that Hollywood has tricked out to the point of exhaustion? Or is it, as a friend suggested, a harbinger of STDs to come? My internal monologue belts like Rita Moreno: Forget this show and find another.