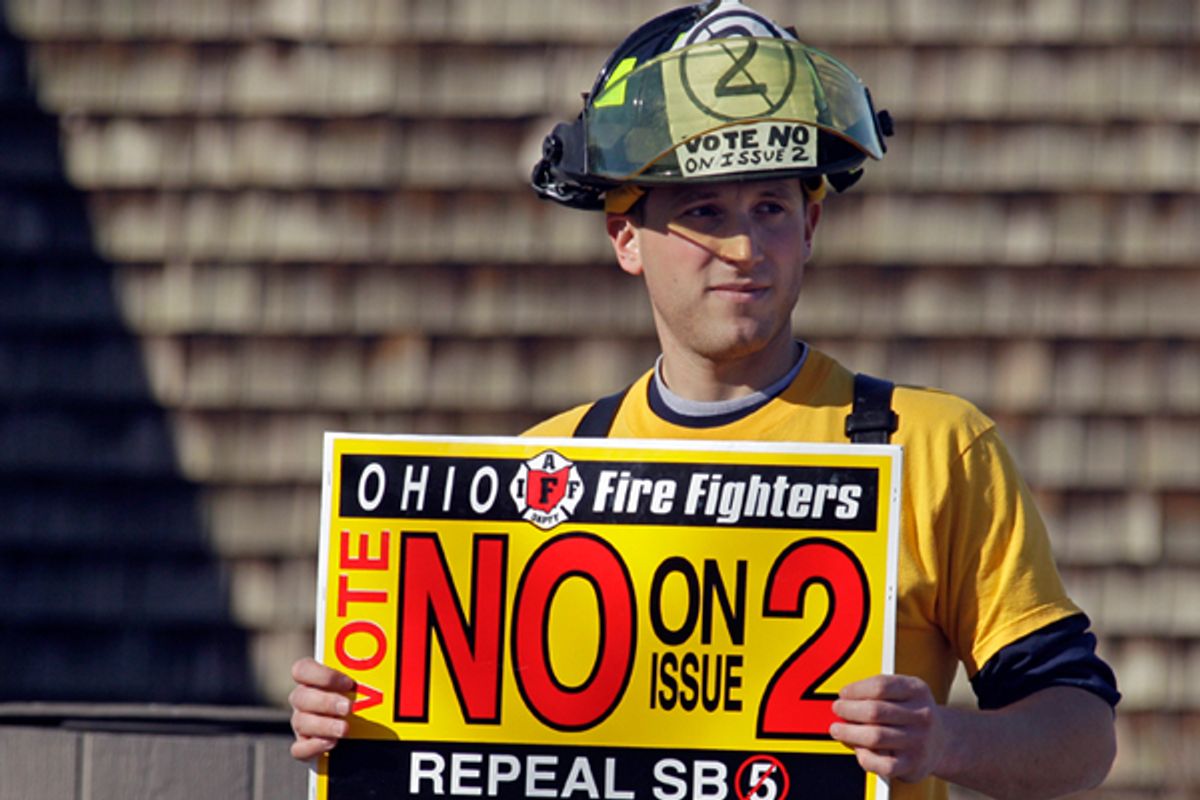 The most recent national survey from the Quinnipiac Polling Institute suggests a serious image problem for the Republican Party, with just 28 percent of voters saying they have a favorable view of the GOP and 57 percent saying they have an unfavorable one. Tuesday night offered a demonstration of why this is, with voters in several states siding against some of the most prominent faces and ideas of the Tea Party-era Republican Party.

The  marquee contest was in Ohio, where voters repealed SB 5, the law that curbs state public employee bargaining rights and that was championed earlier this year by Gov. John Kasich and his fellow state Republicans. The outcome wasn't a surprise -- polls had shown it coming. But the size of the verdict, a 63-37 percent margin in the early returns, was still striking, punctuating a broader shift in public opinion that's taken place in Ohio in 2011.

The year started with a new Republican governor taking office and a new Republican majority in the Legislature, both results of the GOP's 2010 midterm landslide. But once in power, the Republicans overreached, with SB 5 inciting a fierce and sustained backlash and angering many of the swing voters who were crucial to the GOP's '10 success. Kasich's poll numbers crashed early in the year and have yet to recover much. A week before the election, his approval rating stood at 36 percent.

There were other significant results on Tuesday too. In Maine, where a Tea Party-aligned Republican, Paul LePage, squeaked to victory in the governor's race last year, voters restored same-day voter registration, which had been eliminated by LePage and his Republican allies in the Legislature earlier in the year. Like eroding collective bargaining rights, tightening restrictions on voting has emerged as another major point of emphasis for Republicans in statehouses across the country this year. The new laws that have been enacted or proposed generally affect traditionally Democratic constituencies disproportionately. The outcome in Maine wasn't even close on Tuesday: 60 percent of voters defied LePage and the GOP and embraced same-day registration.

Then there's Arizona, where Russell Pearce, the ultraconservative state Senate president and the father of the state's "papers, please" immigration law, was felled in a recall election -- the first time in state history a sitting legislator has ever been ousted by the voters in the middle of his term. Pearce, who had dismissed recall proponents as "far-left anarchists," lost the vote by about 8 points.

Even voters in deeply conservative Mississippi showed they have their limits, rejecting the "personhood" initiative that would have declared that life begins at fertilization by a 55-45 percent spread. The proposal's strict language generated national attention and ultimately unnerved Haley Barbour, the state's outgoing pro-life Republican governor, who began sending mixed public signals the day before the vote.

What does all of this add up to? Well, it's easy to overstate it. This was an off-year election, with only a scattering of contests in a few states, and Republicans had their share of victories too. Even while the "personhood" initiative was failing, for instance, Republican Phil Bryant claimed the Mississippi governorship by 22 points.

Still, the high-profile repudiations of some conservative causes and leaders does speak to what for the GOP has been a negative consequence of the 2010 elections. In that campaign, Republican candidates across the country had it easy; economic anxiety was high and Democrats -- thanks to the 2006 and 2008 elections -- were running just about everything. Thus were voters strongly inclined to blindly affirm the Republican slate; to most, it simply served as a vehicle to protest the ruling Democrats.

The problem for the GOP, though, is that many of the candidates who coasted through the general election were either true-believer ideologues who had won GOP primaries or pragmatic politicians who don't want to face a true-believer insurgency in the next campaign. Thus, on Capitol Hill and in statehouses across the country, Republicans took power in 2011 under pressure to prove their purity to a restive and increasingly absolutist base. SB 5 in Ohio is probably a product of this. So is the Maine voter registration law. And while Pearce's "papers, please" law was actually enacted in early 2010, his anti-immigrant fervor is hardly out of key with the current GOP consensus.

In other words, most voters went to the polls in 2010 feeling a strong desire to vote out Democrats and felt little reason to fear the GOP. But after a year of headlines about shutdown and default brinkmanship in Washington and laws like SB-5 at the state level, the GOP's overall favorable rating has dropped by 12 points. Democrats now have a clear advantage in this area; the same Quinnipiac poll that gave Republicans a 28/57 percent favorable/unfavorable score gave Democrats a 36/39 mark. Which suggests at least the possibility that voters who might otherwise be ready to cast out Barack Obama and his fellow Democrats will think twice before doing so in next year's election.