What if Greece drops the euro

Once presumed unthinkable, the possibility is increasingly likely. Here's why analysts are predicting panic 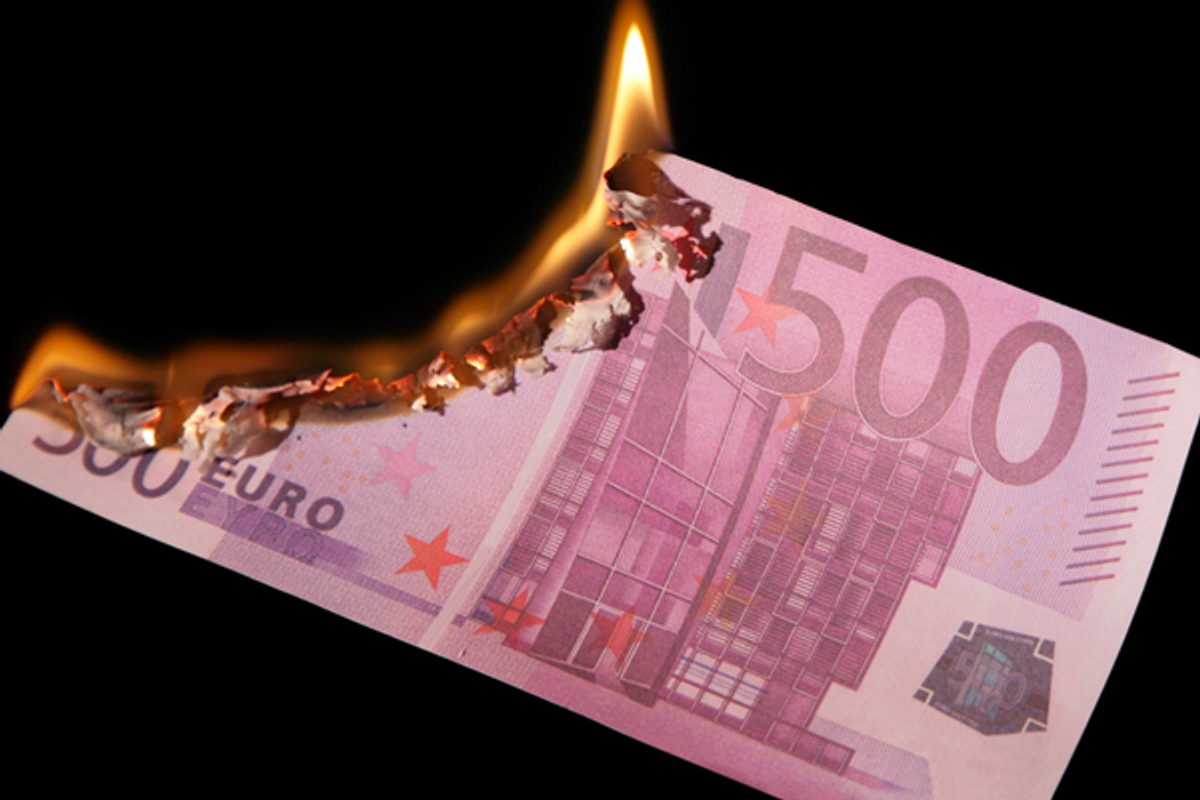 LONDON — In the long saga of the euro zone crisis, Greece may be approaching a tipping point. Governments and businesses are starting to make plans for how to manage the country's possible departure from the euro.

Until recently, European politicians didn’t publicly acknowledge that any nation might abandon the currency. But late last week, Luxembourg's Prime Minister Jean-Claude Juncker said, "We would like Greece to remain a member, but we’re not saying Greece has to stay a member at all costs."

This was followed by the news that TUI, Germany's largest package-tour operator, sent a letter to Greek hotels requesting that they accept payment in drachmas in the event that Greece is forced to return to its old currency.

With Greek politics in turmoil since last Monday, when then-Prime Minister George Papandreou called for a referendum related to the euro zone bailout, sources in the European Commission acknowledge that contingency planning is underway for a possible Greek exit from the euro.

"Plan A through Plans E and F are under discussion," says a source. But details are not available because a Greek departure from the currency union would be a monumental event.

For example, private banks holding Greek bonds have agreed to take a 50 percent "haircut" on their value. If Greece leaves the euro, their losses would increase significantly, given that the country’s currency would drop sharply. Some European banks would be unlikely to survive that kind of loss. So how do you protect them? Should you protect them?

The other reason it is difficult to figure out how to proceed is that there was never any thought given when the single currency was created to any country actually leaving the euro.

Analysts are looking at the one recent case with some similarities to the situation with Greece.

"You have to look at Argentina," says German-born Waltraud Schelkle, senior lecturer at the London School of Economics. "It had as hard a currency pact with the dollar as a country could have without unification of the two."

"One Argentine peso was fixed to be worth exactly one dollar," recalls Schelkle's LSE colleague, Ken Shadlen, a frequent visitor to the South American nation. Shadlen remembers people buying coffee at one of Buenos Aires wonderful cafes, getting a bill for seven pesos and paying with both currencies — say four pesos and three dollars.

But Argentina was strangled with un-payable sovereign debts. It defaulted and uncoupled its peso from the dollar in 2001. What happened next wasn't pretty, recalls Shadlen.

"A week before Christmas, all bank accounts were frozen. This caused riots and mayhem. "

The accounts were frozen to prevent people from exchanging all their pesos for dollars. When the peso was allowed to float on currency markets, it would be worth much less than the dollar.

In January 2002, the Argentine government declared a unilateral moratorium on debt repayments. There followed three years of negotiations with bond holders before the Argentine government announced it would exchange the old bonds for new paper "worth around 30 cents on the dollar," according to Shadlen. You can imagine what this lead to: litigation — lots of it. The suits are still unresolved. As a result, Argentina still can't borrow money on private markets.

Shadlen notes that the parallels between Greece and Argentina are limited. In the midst of its pain, the South American country had one big asset: it grows massive quantities of soy beans, which China imports to feed its people.

Almost immediately following the depreciation of the peso, Argentine soy exports to China soared. The Argentine economy began to grow rapidly. So a violent contraction in GDP was followed by a decade of solid growth.

The problem for Greece is that it doesn't export much. A fifth of its GDP comes from tourism. It has abundant sunshine, but may already have mortgaged the future of Project Helios solar energy farm to the project's German backers.

So what lessons can euro zone policymakers learn from the Argentine situation?

If or when Greece departs the euro, its banks will have to close down to prevent depositors from withdrawing euros or wiring their capital to a bank in France or Germany.

Private bond holders who have already agreed to write off half the value of their Greek bonds will be told that they will only get 30 percent of the face value (or even less) of their bonds. If they balk, they will have to be told, "Sue us."

Since most private Greek debt is held by banks, the LSE's Waltraud says, "What you have to do is re-capitalize Europe's banks, but not all of them." Some hold too much Greek debt and they will have to be allowed to fail.

Currency analyst Stephen Gallo, of Schneider FX, says, "I cannot see how they (euro zone leaders) can let Greece go without simultaneously backstopping the rest of the euro zone countries in order to prevent a domino effect."

And it’s by no means a sure thing that Europe can come up with the cash to do that, especially with Italy’s debt at more than $2 trillion.

Shadlen jokes, "Presumably someone in Greece is designing a new drachma."

In the end that is probably the easiest part of the whole process. Everything else is up in the air.