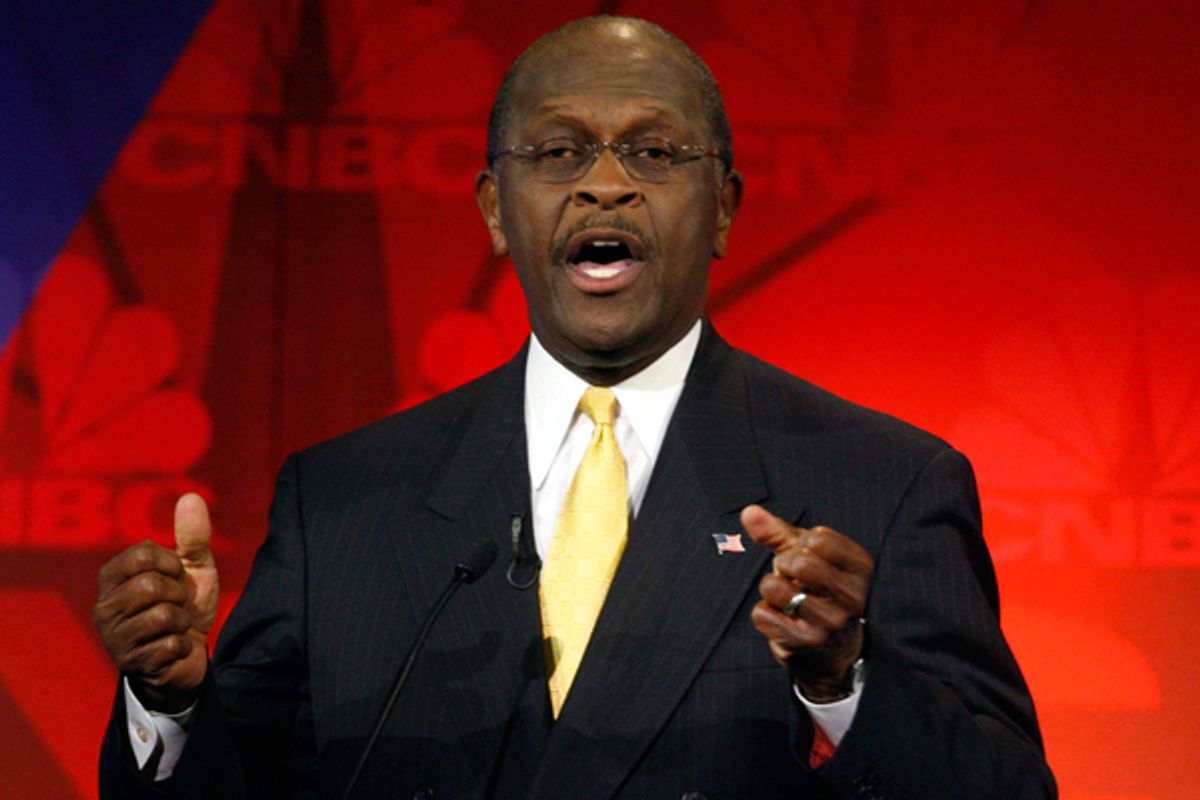 It took a few minutes, but eventually Maria Bartiromo, one of the questioners for the Republican presidential debate that CNBC broadcast Wednesday night, asked Herman Cain about the sexual harassment allegations against him that have dominated the news for the past week.

"Why should the American people hire a president if they feel there are character issues?" she asked.

Most notable about her question, though, was that it was interrupted and followed by loud choruses of boos and hisses from the live audience. Now, it's true, live debate crowds can be an extremely unreliable barometer, especially when the noise comes from only a few audience members. But in this case, the response sounded like it was coming from a lot more than just a few people. Plus, the attitude they conveyed was consistent with recent polling data: An NBC News/Wall Street Journal poll released earlier this week found that 54 percent of Republican voters aren't concerned at all about the Cain charges, with another 15 percent saying they're just "a little" concerned.

Cain replied that "the American people deserve better than someone being tried in the court of public opinion based on unfounded accusations” and added: "I value my character and my integrity more than anything else. For every one person who comes forward with a false accusation, there are thousands who will say none of that activity ever came from Herman Cain." This time the audience cheered.

More interesting, though, is what happened next. John Harwood, one of the panelists, turned to Mitt Romney and asked whether a CEO facing the allegations the Cain does would deserve to keep his job. The boos were even louder this time, and Romney replied by playing to the crowd: "Look, Herman Cain is the person to respond to these questions. He just did, the people in this room and across the country can make their assessments."

That won Romney some hearty cheers, but it was also a marked departure from his comments to ABC News a day earlier, when he'd called Sharon Bialek's accusations of groping by Cain "serious" and "particularly disturbing." He also said that "they’re going to have to be addressed seriously." It was as if Romney saw a warning in the crowd's response to the questions: Don't go there. So he didn't.

Granted, it's still too soon to gauge the full impact of the Bialek allegations on Cain's standing, and as he himself admitted at his Tuesday press conference, there may be more women stepping forward with more stories. But Wednesday night's debate was the strongest sign yet that this scandal might end up not costing Cain much or any support at all -- and that most Republican voters are intent on buying the narrative that Rush Limbaugh, Sean Hannity and other top conservative opinion-leaders have been pushing. If his behavior last night is any indication, even Mitt Romney seems to realize this.