Since my bar mitzvah, I've been guilted into this handwritten tradition. No more 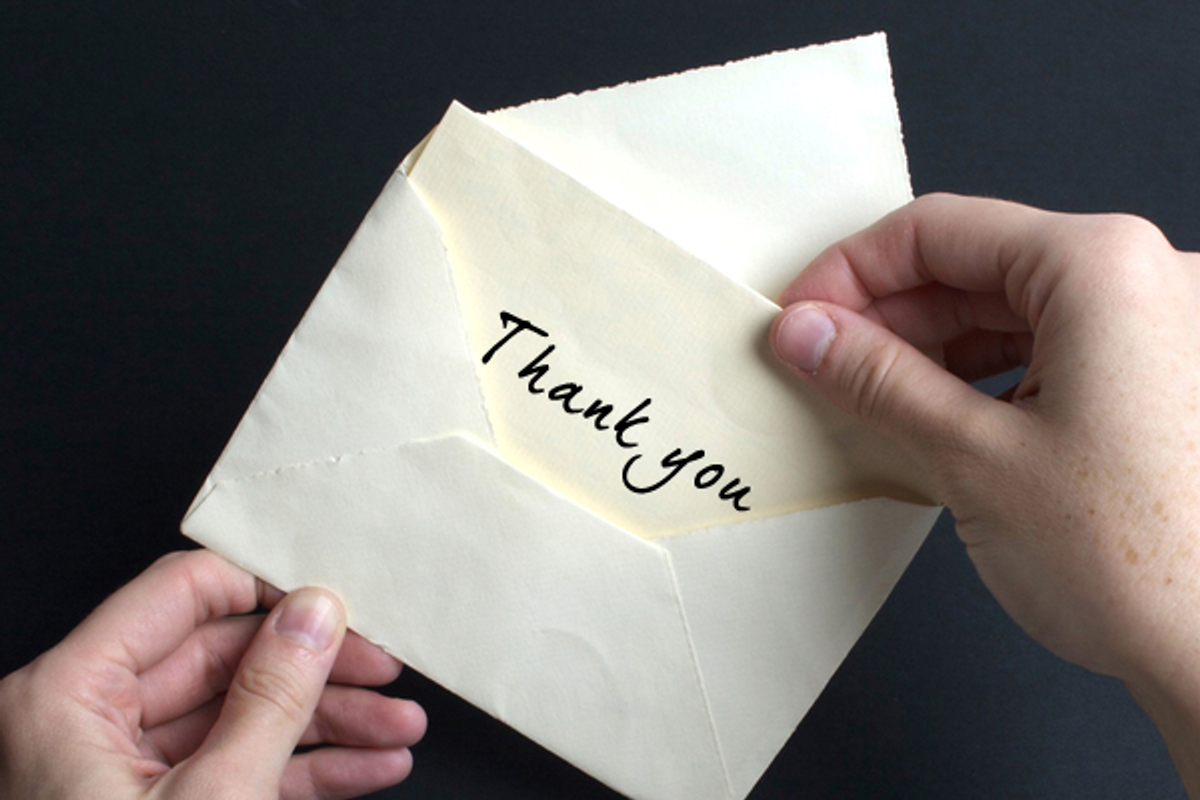 "When was the last time you actually wrote a letter and mailed it?"

Like the question "When was the last time you actually read a hard copy of a newspaper?" this kind of query reminds you of both how old you're getting and how quickly the Internet has changed the way we communicate. Such questions typically arise during your billionth boring lament about the horrors of email, texting and your constantly-buzzing smartphone (not that I have one, by the way). And, just as often, you end such conversations with an inkling (or fear, depending on your technophobia and current job) that in a few years most people will answer such rhetorical questions with puzzled looks and not-so-rhetorical ones ("What's a letter, Dad?" or "What's a newspaper, Dad?").

The thing is, though, while I truly can't remember the last time I rustled through newsprint, I can recall the last time I put pen to paper to write a letter -- and it wasn't in some bygone era. It was just one year ago, when I wrote a thank-you note for a birthday present.

Upon tearing open the gift wrapping, I first thought about emailing a thank-you note, and I certainly had the technological wherewithal to do so, not to mention the gift-giver's personal email address. But then, my hand moved inexorably from my keyboard to my wooden desk drawers, and I watched myself carefully excavate the accumulated office detritus, finally unearthing the dusty old box of stationery ("What's stationery, Dad?").

While I'm sure such anecdotes warm the heart of the struggling U.S. Postal Service, I find myself yet again in the post-gift, pre-thank-you-note aftermath of another birthday -- only this year, I'm suddenly wondering why. Why do so many of us still feel the need -- and corresponding dread -- to write the physical thank-you notes, rather than using more modern technology to convey the sentiment?

If this were a musical rather than a written essay, I would attempt to answer this great unknown by doing my best Tevye impression. I'd spontaneously break into an arm-shaking rendition of "Fiddler on the Roof's" "Tradition," which, not coincidentally, was played during the candle-lighting ceremony at my bar mitzvah.

I say "not coincidentally" because almost a quarter-century ago, at the wide-eyed age of 13, one of my first experiences as an Official Jewish Adult was being indoctrinated into the mercurial institution of thank-you-note writing.

Every bar mitzvah gift honoring the notion that my plump, pubescent awkwardness was somehow a sanctified sign of Jewish Manhood required a personalized, handwritten thank-you note. This was the ironclad edict in our household. Failure to follow was out of the question, as the edict was enforced under the unspoken threat of, well, the unspeakable.

And so under my mother's watchful eye and with my father's "speak softly and carry a big stick" presence lurking in the background, I dutifully swallowed my complaints and spent as many post-bar mitzvah weeks at the kitchen table with the dreaded gift list, thank-you cards and Bic pens as I had spent pre-bar mitzvah weeks at synagogue with the Torah, Haftarah and pointer. (In retrospect, perhaps the thank-you torture was an equally important part of my religious education as scripture, for during that slow, painful process, I began my formative years of scholarship and expertise in the mystical canon of Jewish Guilt).

While most of us didn't have email back in those days, it wouldn't have mattered. We had both the telephone and the possibility of personal interaction. But, as you are well aware, the nondenominational, near-universal thank-you-note tradition didn't permit substitutes. You couldn't telephone a relative and thank him or her for the good luck wishes of "chai!" embodied by the $18 check. A scrawled inscription on a piece of paper was the only acceptable means of expressing thanks.

Since those halcyon days, of course, almost everyone has acquired a dial-up modem and AOL handle, followed by a DSL modem and Hotmail account, and later a cable modem and Yahoo address, and finally, Wi-Fi and a permanent Gmail home in the Cloud. And as that evolution accelerated, most of society's (and even Jewish society's!) letter-in-the-mail practices have been supplanted by email.

No matter the occasion, no matter your position as the one celebrating or the one being celebrated, the physical thank-you-note tradition remains at the heart of a perpetual motion process whereby gifts come in, thank-you notes go out, then gifts go out, and thank-you notes come back in. It's as if the ritualized effort -- the wrist and finger pain of writing cursive ("What's cursive, Dad?"), the paper-cut risk to your tongue of envelope sealing ("What's an envelope, Dad?"), the horrible aftertaste of licking the stamp ("What's a stamp, Dad?") -- all of it remains the only way to prove one's authentic gratitude. And if this sacred cycle is ever broken, the result is overt spite or passive resentment -- whichever melodramatic poison is selected by the affected friend or family member.

In this, we see that the true ethos of the thank-you note contradicts one of the fundamental aphorisms of childhood. If keyboarding, calling or in-person thanking is simply not enough, then, in fact, it's not "the thought that counts." Instead, the tradition implies that it's the elbow grease and pain that really count.

Traditions, though, can -- and at times, must -- change. Hell, even Tevye had to learn that hard lesson. And for me, this recent birthday is one of those times of change.

If I wanted to be conniving and dishonest about it, I would tell gift-givers it must change because of some high-minded concern like global warming, deforestation or the economy. I would turn Jewish Guilt to my advantage, telling them in my thank-you email or thank-you phone call that I'm taking a principled stand against sending them a physical thank-you note because I'm worried that mailing needlessly expands my carbon footprint, or because I don't want to waste precious wood-based paper, or because postage is blowing a devastating hole in my recession-battered budget. For this, I'm almost positive I'd not merely get a pass -- I'd generate sympathy for myself (and maybe even some extra gifts).

To know that is to contemplate gratitude standards of the past. I'm sure 150 years ago, a telegraph was seen by some as an insult in lieu of a Pony Express mailer, just like I'm sure 50 years ago ago, a ballpoint-penned thank-you letter was seen by some as an insult, because Old World elders expected parchment, calligraphy and one of those "Dangerous Liaison"-esque red wax seals that make an envelope look like a discarded coaster for a Maker's Mark bottle.

Somewhere along the line, though, our culture decided to accept a different dominant platforms. And you know what? We survived -- and evolved.

For sure, a few family members and friends will interpret my abrupt change as a sign of conceit. These will likely be the oldsters of the bunch -- the stubborn few making a principled, almost admirable stand against the 21st century by categorically refusing to have an email address.

"Oh, I guess he doesn't think he needs to thank me," they'll mutter a few thank-you-note-less days after the birthday gift ... until the telephone rings and they hear me on the other side slathering them in appreciation. Then, surprised, they'll be sugary sweet to me -- they'll sigh into the receiver (no doubt, corded and attached to a rotary device) and tell me "you're welcome." Alas, though, a tiny few will still hang up and mutter to themselves about the goddamned ingrate and his lack of thank-you note.

But here's the reassuring part: My bet is that the vast majority of my clan won't even notice the change. Not because they are some special breed of human that doesn't desire praise. Not because they don't want to be thanked. But because in the age of information overload, platform agnosticism and content disaggregated from its branded source, the medium no longer has to be the message. The message finally can -- and should -- just be the message.

And for that, we owe this crazy, maddening, frustrating, awful and wholly confusing digital age the biggest thank-you of all.