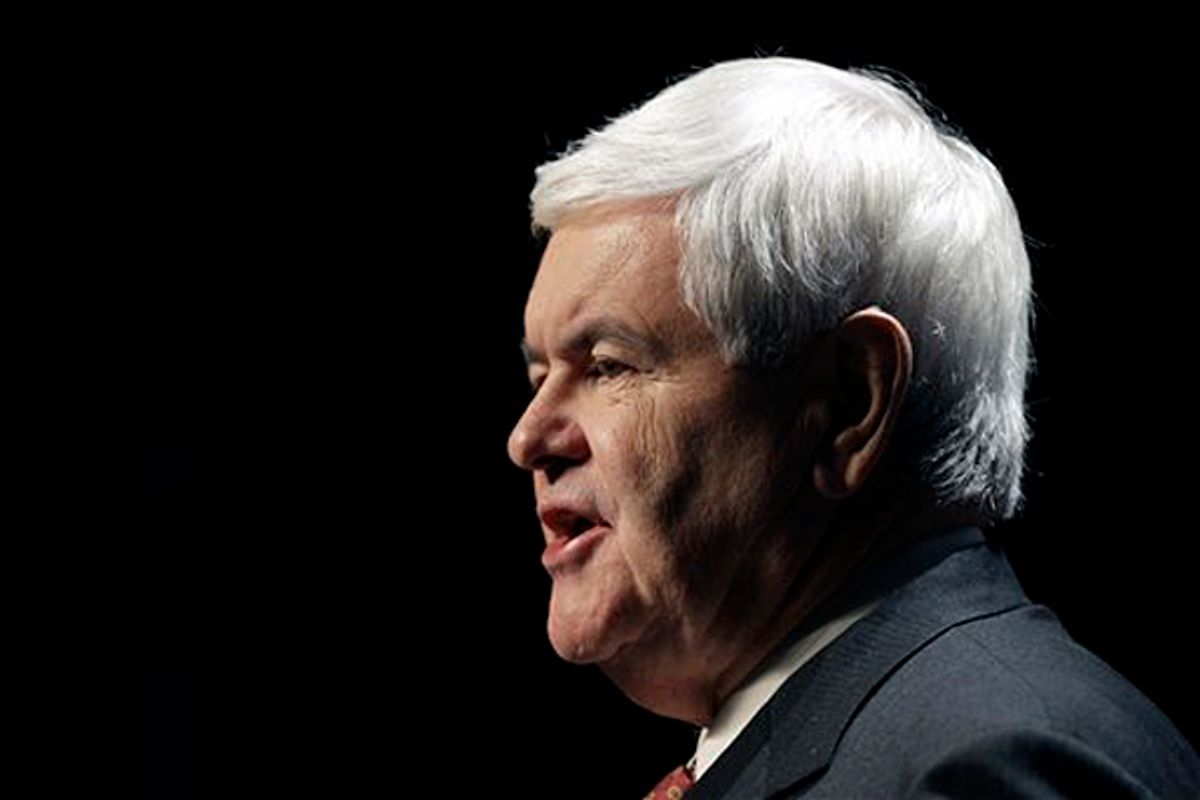 In last night's hallucinatory GOP presidential debate, former House Speaker Newt Gingrich did his usual blustery free-associative word-barrage routine that for years convinced numerous reporters and pundits that he was somehow an intellectual statesman. The highlight was probably when Gingrich was asked what he'd done to earn his consulting firm a $300,000 contract from Freddie Mac. Gingrich insisted the money was for history lectures. That is not really the case.

GINGRICH: Well, I just want point out, my colleagues have done a terrific job of answering an absurd question. To say in 30 seconds...

BARTIROMO: You have said you want to repeal "Obama-care," correct?

GINGRICH: I did. Let me finish, if I may. To say in 30 seconds what you would do with 18 percent of the economy, life and death for the American people, a topic I've worked on since 1974, about which I wrote about called "Saving Lives and Saving Money" in 2002, and for which I founded the Center for Health Transformation, is the perfect case of why I'm going to challenge the president to seven Lincoln-Douglas style three-hour debates with a timekeeper and no moderator, at least two of which ought to be on health care so you can have a serious discussion over a several-hour period that affects the lives of every person in this country.

A book plug, an assertion of unparalleled expertise, and a hilarious proposal that makes no sense -- all in one answer? He's still got it.

I haven't checked to see how sales of "Saving Lives and Saving Money" are looking this morning, but I am sure Gingrich was grateful for the opportunity to advertise it for free via a supposed presidential debate.

According to Politico, here's where the campaign trail has taken candidate Gingrich today:

You gotta shake a lot of hands if you want to win the Detroit Metropolitan Airport Westin Hotel caucuses.

After 20 years of pretending to mull presidential bids in order to keep his name in the papers, Newt actually went through with the fake presidential bid this year in order to put his name in even more papers -- and drum up business for the various schemes that keep him in diamond cuff links. (Most of his campaign staff quit because all Gingrich wanted to do was organize screenings of his documentaries.) It's a transparent fraud from a transparent bullshit artist.

But in this environment, this year, astoundingly, it's actually sort of working. Because Gingrich's campaign-crippling missteps happened before those of Perry, Bachmann and Cain (in some cases up to 25 years before), he's consolidating support from the "anyone but Romney" crowd. Real Clear Politics puts him third nationally, and his numbers have been steadily rising since September. The Mark Blumenthal "outsiders" survey has him surging among early state Republican bigwigs and for some reason he's polling in first place in Mississippi.

The Gingrich campaign is becoming so lifelike that Bill Kristol's Weekly Standard has gone all-in on Newt, declaring him the winner of last night's debate, playing up his poll numbers and praising his message.

What the hell is the endgame here? There is no conceivable scenario in which Newt Gingrich is allowed to win the Republican nomination for the presidency -- not with his divorces and jewelry store credit lines and history of environmentalism -- but we could end up with a New Gingrich, public intellectual, who's all the more self-satisfied and ubiquitous for having actually won a presidential primary. We all lose.