The crisis in the eurozone

The continent is destroying the weak to protect the strong. But will that be enough? 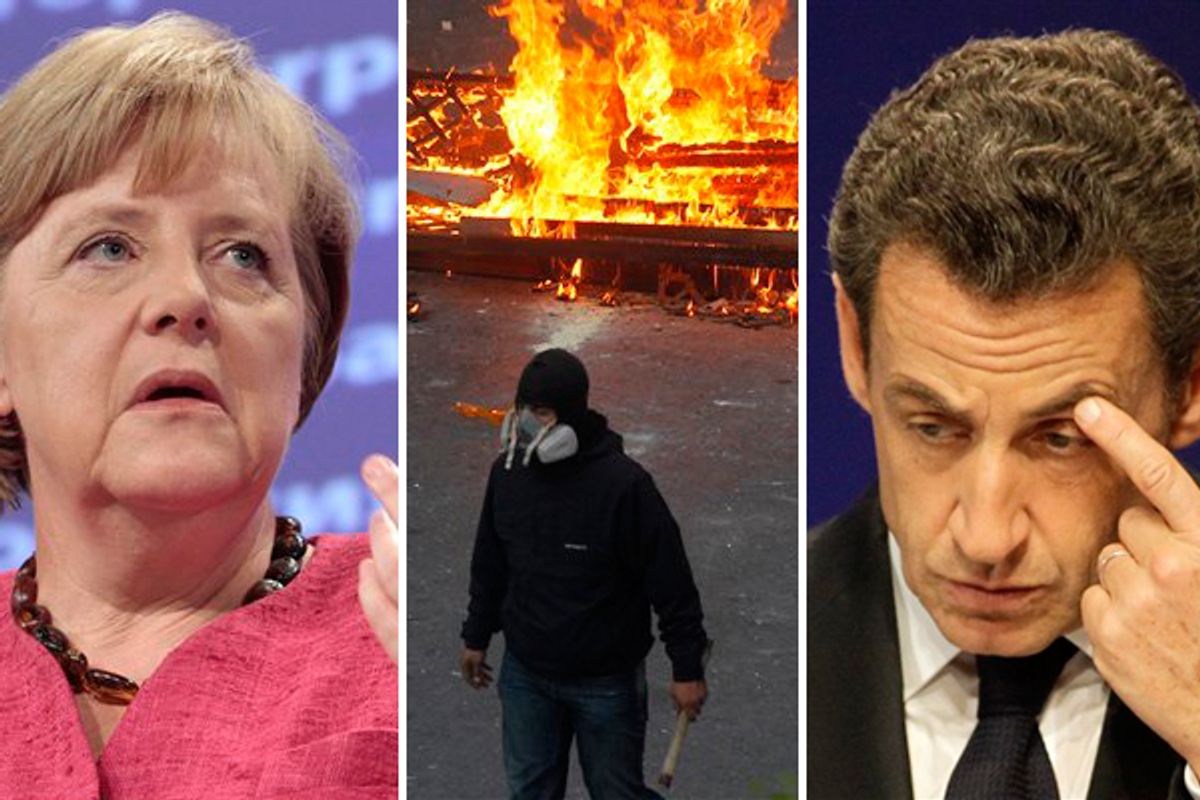 The eurozone crisis is a bank crisis posing as a series of national debt crises and complicated by  reactionary economic ideas, a defective financial architecture and a toxic political environment, especially in Germany, in France, in Italy and in Greece.

Like our own, the European banking crisis is the product of over-lending to weak borrowers, including for housing in Spain, commercial real estate in Ireland and the public sector (partly for infrastructure) in Greece.  The European banks leveraged up to buy toxic American mortgages and when those collapsed they started dumping their weak sovereign bonds to buy strong ones, driving up yields and eventually forcing the whole European periphery into crisis. Greece was merely the first domino in the line.

In all such crises the banks' first defense is to plead surprise – “no one could have known!” – and to blame their clients for recklessness and cheating.  This is true but it obscures the fact that the bankers pushed the loans very hard while the fees were fat.  The defense works better in Europe than in the U.S. because national boundaries separate creditors from debtors, binding the political leaders in German and France to their bankers and fostering a narrative of national-racism  (“lazy Greeks,” “feckless Italians”) whose equivalent in post-civil rights America has been largely suppressed.

Underpinning banker power in Creditor Europe is a Calvinist sensibility that has turned surpluses into a sign of virtue and deficits into a mark of vice, while fetishizing deregulation, privatization and market-driven adjustment. The North Europeans have forgotten that economic integration always concentrates industry (and even agriculture) in the richer regions.

As this process unfolds the Germans reap the rents and lecture their newly indebted customers to cut wages, sell off assets, and give up their pensions, schools, universities, healthcare  – much of which were second-rate to begin with. Recently the lectures have become orders, delivered by the IMF and ECB, demonstrating to Europe's new debt peons  that they no longer live in democratic states.

The eurozone's architecture makes things worse in two major ways.  While the EU has long paid some compensation to its poorer regions, these structural funds were never adequate and are now blocked by unmeetable co-pay requirements.  And the zone lacks the inter-regional redistribution channels to households that the U.S. has developed in Social Security, Medicare, Medicaid, federal government payrolls and military contracting among other things.  Nor do German retirees settle in Greece or Portugal in large numbers as New Yorkers do in Florida or Michiganders in Texas.

Second, the ECB refuses to solve the crisis at a stroke, which it could do by buying up the weak countries' bonds and refinancing them. The argument against this is called “moral hazard,” buttressed by old-fashioned inflation fears, but the real issue is that to do so would admit loss of control by creditors over the central bank.  Actions parallel to those taken by the Federal Reserve – nationalizing the entire commercial paper market, for instance – would repel the ECB, even though it does buy up sovereign bonds when it has to.  So instead the zone has gone about creating a gigantic toxic CDO called the European Financial Stability Fund, which may shortly be turned into an even more gigantic toxic CDS (like AIG, they will call it “insurance”).  This may defer panic at most for a little while.

Technical solutions exist.  The most-developed of these is the “Modest Proposal”  of Yanis Varoufakis and Stuart Holland, widely backed by older political leaders in Europe. It would  1) convert the first 60 percent of GDP of every eurozone country's debt to a common European bond, issued by the ECB; 2) recapitalize and Europeanize the banking system, breaking the hammerlock of national banks on national politicians; and 3) fund a New Deal-like program of investment projects through the European Investment Bank.

These are the best ideas and none of them will happen. Europe's political classes exist these days in a vise forged by desperate bankers and angry voters, no less in Germany and France than in Greece or Italy. Discourse is sealed off from fresh ideas and political survival depends on kicking cans down roads so that the fact that this is a banking crisis does not have to be faced.  The fate of the weak is at best incidental. Thus every meeting of finance ministers and prime ministers yields treacherous half-measures and legal evasions.

The latest example was the pretzel-logic that declared a 50 percent haircut on Greek debt to be “voluntary” so that it would not trigger default clauses on the CDS to which some American banks, in particular, might be exposed.  When Timothy Geithner warned the Europeans of potential “catastrophe” last month one may reasonably infer he had this risk – and not the minor effect on our already disastrous jobs picture – in mind.  But of course if the haircut can be declared voluntary, then CDS are not worth the storage space they occupy in bankers' computers, and another prop to the rapidly failing market in sovereign debts falls to the ground.

Political fragility also explains the fury in France and Germany when George Papandreou [the calmest man in Europe, by the way, having been born and raised in Minnesota] sought to cut the knot of his rebellious ministers, irresponsible opposition and angry public by putting the latest austerity package to a vote. God help the bankers!  The move was fatal to Papandreou in short order, and Greece will now be turned over to a junta of creditors' deputies if such can be found willing to take the job.  It won't be anyone who wants to continue to live in Greece afterward.

Greece and Ireland are being destroyed. Portugal and Spain are in limbo, and the crisis shifts to Italy – truly too big to fail – which is being put into an IMF-dictated receivership as I write. Meanwhile France struggles to delay the (inevitable) downgrade of its AAA rating by cutting every social and investment program.

If there were an easy exit from the Euro, Greece would be gone already. But  Greece is not Argentina with soybeans and oil for the Chinese market, and legally exit from the Euro means leaving the European Union. It's a choice only Germany can make.  For the others, the choice is between cancer and heart attack, barring a transformation in Northern Europe that not even Socialist victories in the next round of French and German elections would bring.

So the cauldrons bubble.  Debtor Europe is sliding toward social breakdown, financial panic and ultimately to emigration, once again, as the way out, for some.  Yet – and here is another difference with the United States – people there have not entirely forgotten how to fight back.  Marches, demonstrations, strikes and general strikes are on the rise.  We are at the point where political structures offer no hope, and the baton stands to pass, quite soon, to the hand of resistance.  It may not be capable of much – but we shall see.