The veterans in a new documentary signed up for weekend Guard duty, but spent a decade fighting in the Middle East 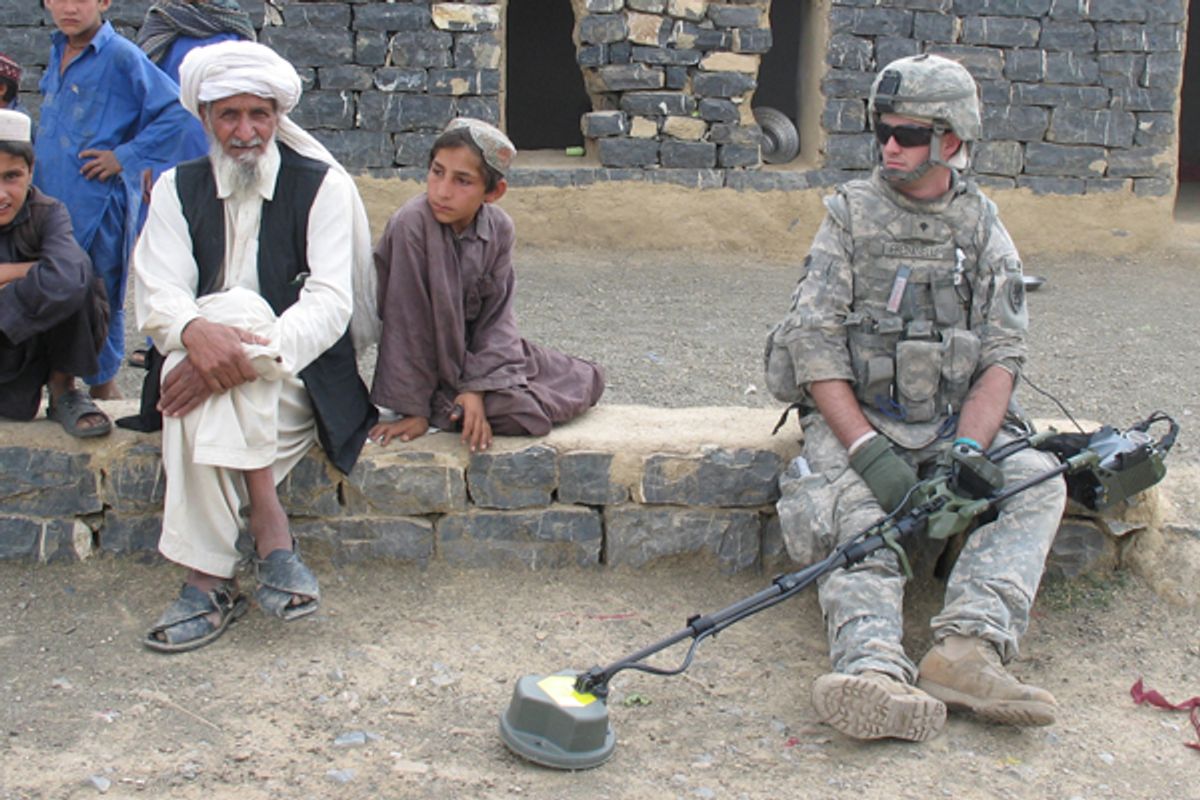 A still from "Where Soldiers Come From"
--

The last 10 years have produced an array of documentaries about post-9/11 America, but few are as haunting and compassionate as Heather Courtney's "Where Soldiers Come From," which airs Thursday on the PBS series "P.O.V." If you're into nonfiction and like films about recent American history, you can slake that thirst with dozens of movies about Afghanistan and Iraq and the men and women who served there -- everything from detailed policy and process documentaries to up-close portraits of individuals. But what makes "Where Soldiers Come From" so unusual is the relaxed and intelligent way that it connects the private and public experience of war. Deftly switching back and forth between a tiny town in Michigan's Upper Peninsula and the chaos of Afghanistan, the movie plays like an elegant real-life answer to "The Best Years of Our Lives" and "The Deer Hunter."

Courtney focuses on 10 friends who joined the Guard hoping -- perhaps believing, as many people did back then -- that they would never see battle, and that if they did, they wouldn't be in the thick of it. They thought they were agreeing to wear uniforms and go on training exercises and maybe be called on to quell domestic unrest or help out during disasters. In exchange, they'd get a paycheck, a $20,000 signing bonus and college aid. They saw Guard service as a way to improve their lives -- a motivation keenly depicted in an early scene that shows Dominic Friedanelli, an aspiring artist, spray-painting a mural on the wall of an abandoned building. He's a classic creative type who sees money as a means to an end -- in this case, a way to formally study art and become a professional. "Ah, he's a good kid," Dominic's father says. "He was such a good kid, in fact, for one of his birthdays, on the bus, he was giving his birthday money away to kids. 'Here, here's a buck. Here, have two!'" Another enlistee, Matt Beaudoin ("Bodi"), has a family history of military service and wants to be a cop like his dad before him. "That's all you hear from small towns: 'Oh, I can't wait to get out,'" he says. "But I had a good time growing up."

During the aughts, the National Guard fell victim to mission creep and became an unofficial active branch of the nation's combat military. As Courtney's movie unfolds across several years and across two continents, we see how this policy affects individuals. The young men evolve from naive small-town dreamers to war veterans dealing with depression, shell shock and brain injury.

These soldiers, their girlfriends and their families aren't rhetorical abstractions to the filmmaker. They're ordinary young people who viewed service during wartime as a career option and were forever changed by their experience -- people like Cole Smith, Dominic's best friend.

"A lot of you guys are like, 'I can't wait to kill someone,'" a fellow soldier tells Cole while they're patrolling Afghanistan in a tank. "I don't want to kill anyone," Cole says, smiling. "I'm not a fighter, I'm a lover."

"I told myself I was never gonna join the military," Cole says later in his service, when he's pounding cough syrup to stay awake through endless bomb disposal patrols and coping with a stomach ailment that might be an ulcer. "Dropped out of school. Quit my job. Didn't have any money, I figured, 'Twenty Gs, National Guard, one weekend a month, two weeks a year, fuck, friends already there ... Let's do it.' I knew I probably had to deploy at least once in six years. Pretty obvious, I guess -- we're at war. I just figured, 'Fuck it.' Might as well do something with my life, you know?" He looks away from the camera for a second, then looks up again, staring straight into the lens, and says in a self-flagellating sing-song: "Iiii-diot!"

This sense of disillusionment sits uncomfortably with the reactions that the troops get when they return home -- gratitude, empathy and patriotism, undercut by resentment against the government for taking young men away for months at a time to fight an amorphously defined "War on Terror." They want to feel that the work they're doing is important and meaningful as well as tough and dangerous. They're frustrated, depressed and alienated, but also proud of themselves and their brothers and sisters in uniform, and determined to find some meaning in the experience.

Courtney's filmmaking mirrors her subjects' complex emotions. For the most part, she's content to hang back and watch. She captures war and peacetime moments through offhand bits of conversation and montages backed by gentle acoustic guitar music: a party around a campfire, a swim in Lake Michigan, a sweet but awkward dance, a shot of an empty restaurant, panoramic shots of hills dotted with fall leaves. These scenes might have the quality of cheap elegy in another movie, but in this one they're sincere and beautiful. We're not seeing an idealized, unreal world, but a real world that's still here, even though the soldiers can't plug into it the way they used to.

"I don't really want people to want to know what I think I want," says Dominic in an early scene, standing in a gallery while his mother tries to decode one of his surreal, collage-style drawings. "I want them to perceive through their own experience." She indicates a teddy bear and an American flag nailed to a melting crucifix; swinging from the bear's left paw is a swollen cartoon heart lashed up in a rope, one upper edge squeezed as if by a fist, the other ringed by an angel's halo. "This is supposed to represent the death of childhood, am I right?" she asks. "Somewhat," he replies.

Watch Where Soldiers Come From - Trailer on PBS. See more from POV.