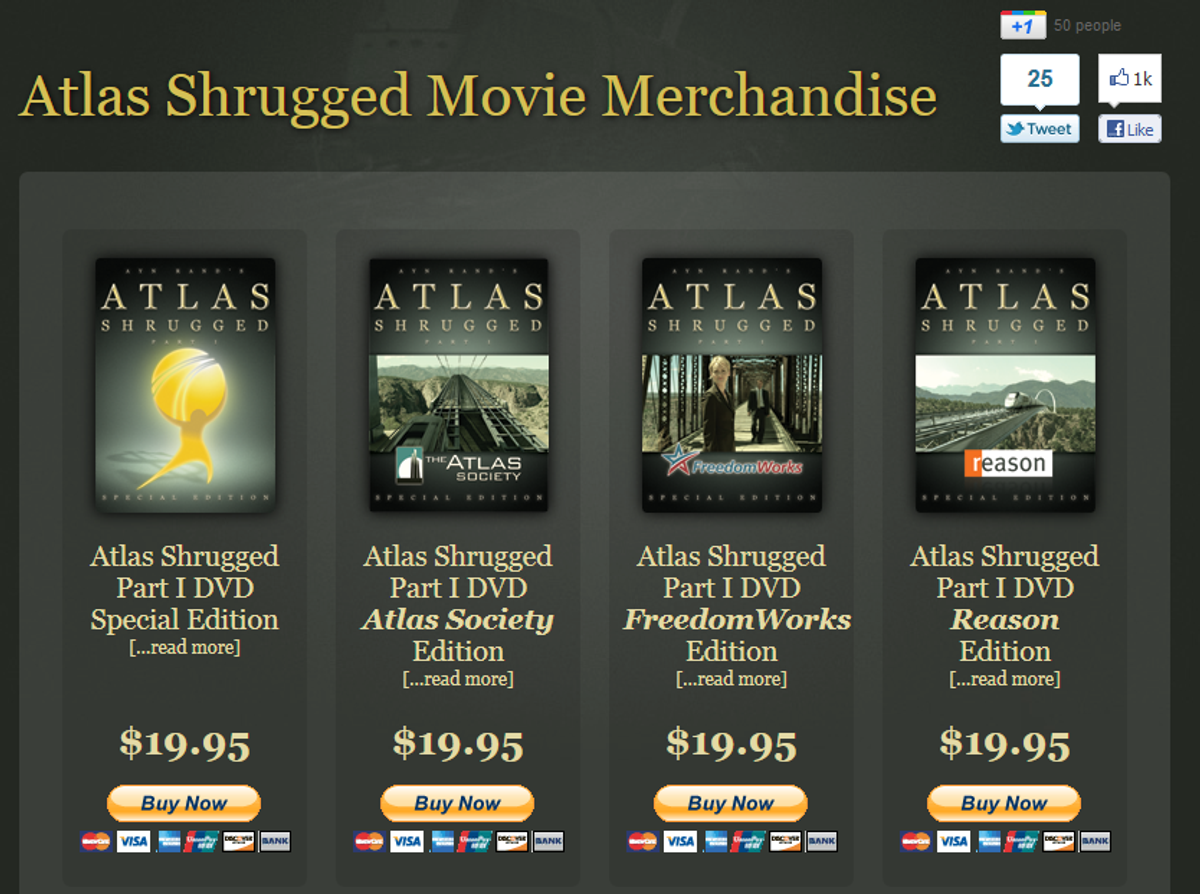 Did you, like most Americans, run out to your local Cato Institute gift shop and buy a DVD copy of "Atlas Shrugged: Part I" the second it was released? If you did, I'm afraid you've bought a defective product. Unfortunately, these DVDs all came from the factory loaded with a turgid, impenetrable, morally indefensible and wholly incoherent film about railroads and fancy steel. Also the copy on the back of the case is misleading.

The film's producers have released an apologetic press release explaining what went wrong:

The 1957 novel, Atlas Shrugged, is known in philosophical and political circles for presenting a cogent argument advocating a society driven by rational self-interest. On the back of the film's retail DVD and Blu-ray however, the movie's synopsis contradictorily states "AYN RAND's timeless novel of courage and self-sacrifice comes to life..."

Did you spot the error there? Rand's Objectivism is staunchly opposed to "courage and self-sacrifice," along every other essential component of basic human empathy, because it is a philosophy for angry teenage boys who imagine that they're intellectually superior to everyone around them.

The producers will send everyone a new title sheet for the film that refers, correctly, to "AYN RAND’s timeless novel of rational self-interest and lots of rape." (J/k I think they toned down the rape.)

"Atlas Shrugged" cost a reported $20 million and made less than $5 million at the box office. The filmmakers claim to be producing Part II.

In other news of the efforts by various wings of the conservative movement to expand the scope of their oft-hilarious parallel media, the people dumb enough to invest actual real-life money in what was supposed to be a TV channel specifically for the Tea Party are now suing the businessman who took their money. Turns out "Tea Party HD" was actually more of a "scam" than a "viable business plan."

“The alleged purpose of Tea Party HD was to be the ‘world’s first HD provider of news about the Tea Party,’” the lawsuit states. “In reality it was an investment scheme to defraud politically conservative-minded citizens who support the Tea Party mission.”

How does Tea Party HD co-founder Anthony Loiacono respond to that very serious charge? With a very serious proposal, obviously:

Loiacono told the Tennessean, in response to the suit, that he would challenge Hemrick to settle it through a televised “lie detector challenge” — and if he wins Hemrick would have to drop the suit and cover Loiacono’s legal fees.

Giving this very savvy and serious entrepreneur $287,500 definitely seemed like a wise investment at the time, I am sure.

Tea Party HD, TPM notes, is known mostly for setting up that other camera that Michele Bachmann insisted on looking into that night she gave a rebuttal to the State of the Union.