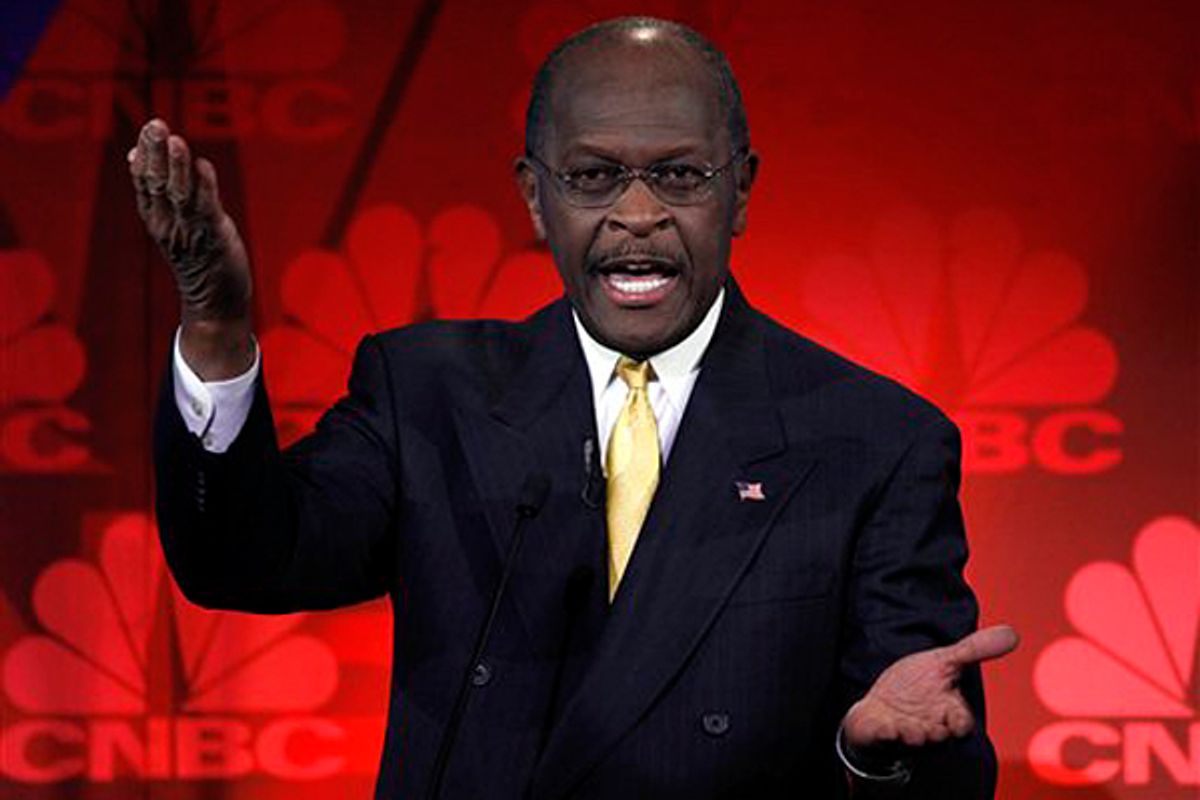 Two new national polls confirm there's been measurable slippage in Herman Cain's support in the GOP presidential race -- but that he remains at or near the top of what remains an unsettled field.

A CBS News poll puts the former Godfather's Pizza CEO in first place, but only with 18 percent -- a drop of 7 points from CBS' last poll two weeks ago. Mitt Romney and Newt Gingrich are tied for second with 15 percent, followed by Rick Perry at 8. A McClatchy/Marist survey, meanwhile, has Romney in the lead with 23 percent, Gingrich in second at 19, and Cain close behind at 17.

Cain's dip seems to be primarily the result of defections from female supporters. In the last CBS poll, which was released Oct. 25, he actually enjoyed more support from women (28 percent) than from men (22 percent) and led the GOP pack with 25 percent. But now, after more than a week of intense news coverage of sexual harassment allegations, only 15 percent of female GOP voters say Cain is their top choice, while 21 percent of men are still with him.

Cain's plummeting support among Republican women may reflect something of a split among conservative opinion-shapers.

Prominent male conservatives like Rush Limbaugh and Sean Hannity rushed to Cain's defense early on and haven't backed off, insisting that he's the victim of a liberal media smear and (at least in Limbaugh's case) belittling Sharon Bialek, the woman who came forward to accuse Cain of groping her. Just last night, Hannity treated his Fox News viewers to a contentious interview with Gloria Allred, Bialek's lawyer. The match-up -- beloved conservative host vs. famous liberal/feminist attorney -- practically begged the show's conservative male viewers to be dismissive of the charges against Cain.

At the same time, though, there have been some prominent conservatives who have broken with the Cain victimization narrative -- including some influential women. For instance, Penny Nance, the head of Concerned Women for America, called Bialek's allegations "credible" earlier this week and pronounced herself "very disturbed" by the details. That view is apparently shared by a significant chunk of female Republican voters; according to the CBS poll, 38 percent of them say that the accusations against Cain make them less likely to support him. Among men, that number is only 23 percent.

Both polls were released this morning as video of Cain making a joke about Anita Hill was furiously circulating online. In the clip, a supporter begins asking Cain a question about Hill, only to be interrupted by laughter from the crowd. Cain then asks, "Is she going to endorse me?" and starts laughing hysterically. Potentially, this could worsen Cain's burgeoning gender gap. Then again, Hill remains a villain to most conservatives, even female conservatives, so the new clip will probably have the same effect as Cain's sneering reference to "Princess Nancy" Pelosi at Wednesday night's debate -- a comment that was probably appreciated by most Republicans of both genders, and few non-Republicans of either gender.