A street vendor dreams of his own health food diner, one bacon-wrapped hot dog at a time

By Samir Mogannam as told to Donny Lumpkins 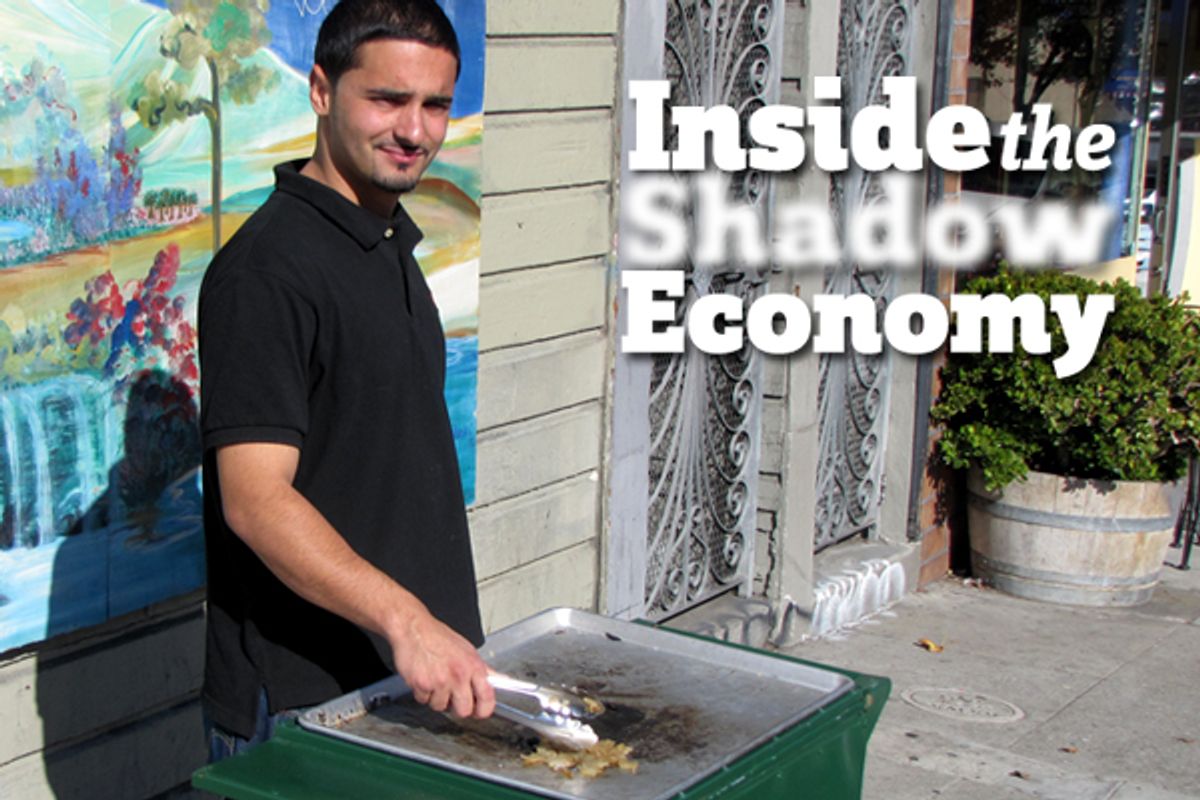 SAN FRANCISCO -- My name is Samir Mogannam. I'm 21 years old [and] I live in the Mission District.  If you live in my neighborhood and go out to clubs at night, you see guys selling bacon-wrapped hot dogs on the street, and it’s awesome.

I always had the idea to do that, but with vegan chili-dogs, something a little different and something everybody could eat.

It took months before I got my [food] cart; talking to these mysterious guys and communicating with them, getting their numbers. You can’t just find a cart on Craigslist or whatever. Finally, I found a guy named Saul who was able to help me.

My dad always had a restaurant. My cousins opened up Bi-Rite (market) over there on 18th and Dolores, which was originally my grand uncle’s place back in the late '60s. It was a liquor store and market, then eventually the kids took it over and it evolved into what it is today.  I’m born into working with food.

My vending routine begins with prepping; getting the onions chopped up to grill. If I'm doing my vegan chili-dogs, it’s hard work. I have to go to the farmer's market in the morning and get all the produce needed. I make my chili from scratch; nothing out of the can. So I reduce all of the tomatoes and get the beans cooked, getting my chili ready for the day.

Then it’s getting everything on the cart. After I make sure I have everything on my checklist -- hot dogs, buns, plates, napkins -- then I start hauling that thing to my destination, which is the hardest part; just dragging that thing. Depending on how much stuff is on, it could get up to around 120 pounds. In the Mission nothing’s too far away and [the neighborhood] is mostly flat. After I find a good spot -- usually in Dolores Park -- it takes 20 minutes for me to set up.

I go to the park on nice sunny days. I just try to find people at the park hanging out chilling. Maybe they'll get the munchies. I thought, it’s a great place to set up because everybody’s young and alive and everyone’s so nice over there and it’s a good vibe. I thought it would be a good idea to be conveniently there for people to just walk a couple feet and get something to eat, some street food, without having to kill their high by walking all the way down to the market to spend a bunch of money.

I kind of worry about getting harassed by SFPD [San Francisco Police Department] about it sometimes; then other times I'm not really tripping. Thankfully, nobody has a problem with me out there.

They can see how I conduct myself; I kind of know what I'm doing. I'm not doing anything unsafe and everything is sanitary and kept at the right temperature. Cops haven’t been a problem [even though] I'm sure they have seen me in Dolores Park. And I don’t think the health inspector is there too much, so ... I haven’t really had that problem yet.

[Not having a permit] does restrict me from just posting up on the street out in the middle of the day when I want to. I never even tried to get one. I grew up out here and I gotta hustle and bustle, you know? No time to ask or pay for permission.

I want to make a deal with an establishment that would authorize me to be right outside of their place. People love to grab a quick bite of street food, after the club.

I don’t want it to be a full-time thing or anything like that -- I serve tables at Chilly's in San Bruno, too -- but if I can have fun, serve people good food and make a little bit of money at the same time, that wouldn’t be bad. Right now, little side hustles like my cart are essential to me. Just having one job won’t pay the bills.

I would like to one day own my own establishment. That was definitely one of my fantasies and one of my dreams.  That would be cool.

I eventually want to get away from making money off meat and animals and want to serve people things that are wholesome and just delicious, using my creativity and letting that be a choice in people’s day: to spend money on my food.

There are a lot of communities that don’t have the choices to get healthy food. You got liquor stores and there’s nothing healthy in there, nothing wholesome. Then you got fast food all around you, so like throughout your day there’s nothing you can get that’s convenient and healthy. I'm just trying to start that whole movement, actually, and be that person to serve healthy foods -- and not only serving food but building awareness about living healthy.

By Samir Mogannam as told to Donny Lumpkins

Donny Lumpkins, 22, is a multi-media content producer at New America Media. HIs latest piece was Down and Out in Dolores Park -- Growing Up Poor in the Bay Area.

MORE FROM Samir Mogannam as told to Donny Lumpkins