Is Occupy Wall Street too white?

Not really. It represents black and Latino interests better than the Obama administration 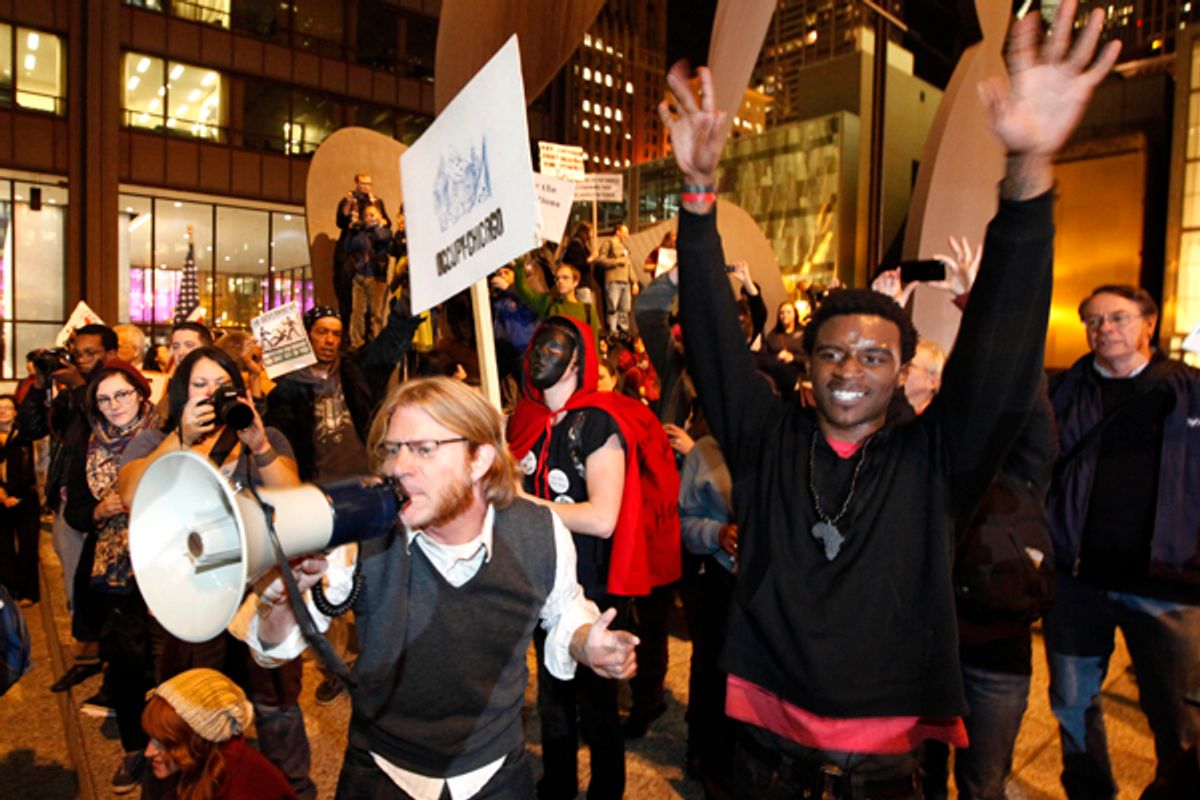 There is some truth to the contention that the nationwide Occupy Wall Street is largely a white-led movement, as indicated in a recent Maynard Institute article by Nadra Kareem Nittle. But claiming there are “few people of color among the participants,” as Nittle does, is simply not true.

I say that as someone who was present when the Occupy Wall Street began in New York on Sept. 17 and who has visited 15 occupation sites around the country. I was at Zuccotti Park almost every day for the first three weeks of the occupation and I saw it transition from a movement almost exclusively of white youth to a broad left movement to a multiracial movement and finally to something that represents the composition of this country more accurately than almost any other social phenomenon we can imagine.

Nittle mentions a Fordham University survey that found that by mid-October participants in Zuccotti Park were 68 percent white and 27 percent black, Latino and Asian. While white participation is significantly above the percentage of whites in New York City, this number is actually very close to the national picture of a population that is 72 percent white, according to the 2010 census data. And while Occupy Wall Street is in New York, it’s very much a national and international movement. In my three weeks there I talked to people from at least 10 other states around the country who had come to New York solely to participate in Occupy Wall Street. (As for the other survey Nittle cites on occupywallst.org that calculated the racial composition of visitors to the website at 81.2 percent white, it’s almost useless as a scientific measure because it appears to have been a self-selecting survey.)

In the last month, I have traveled to 14 other occupations around the Eastern half of the United States, including Chicago, Detroit, Philadelphia, Baltimore, Washington, D.C., Charleston, W.Va., Lexington, Ky., and Nashville. And the only thing I can conclude is not to make any sweeping generalizations of the Occupy Wall Street movement, such as Nittle’s claim that people of color are few among the participants.

For one, even a rudimentary examination of Occupy Wall Street in New York City would reveal that numerous unions with significant black and Latino rank and file or leadership are heavily involved in the movement. This includes TWU Local 100, SEIU Local 1199, National Nurses United, the United Federation of Teachers and many more. Second, a slew of people of color community groups are heavily involved in the movement, and there are also Occupy movements led by people of color in New York City like Occupy the Bronx and Occupy Harlem. There is a people of color committee at OccupyDC in Washington.

On Oct. 5, the day of the big labor and student walkout, protest and rally that drew well over 30,000 people, large numbers of African-American and Latino New Yorkers joined in. Nittle does interview one scholar who notes that participation “is a function of resources, whether that’s voting or having the time to go to a march. It’s hard to go out and occupy if you’re working a job at KFC and baby-sitting your sister’s kids.”

That was true of the crowd on Oct. 5. I interviewed five black and Latino demonstrators that day alone. For four of them, it was obvious why they could not be camping out at Zuccotti: They had jobs or school and children to attend to, but they made the time to be there that afternoon and saw the movement as their movement because it spoke directly to their political concerns and realities.

Outside of New York City, in small-city occupations like Allentown, Pa., Youngstown, Ohio, and Lexington, Ky., there are real problems of racial composition that are not being addressed. But these are also small movements with extremely limited resources.

In contrast, in Philadelphia, a huge percentage of occupiers were African-American, perhaps 50 percent, though it is constantly shifting. Detroit was more complicated because that city’s black community has been so devastated. The composition of occupiers appeared to be about half African-American as well, but far fewer were participating in the General Assembly on the day I visited. It seemed many African-Americans at the occupation were homeless or impoverished and did not have the cultural capital to fully participate in the movement, but of the 10 African-Americans I talked to, all said they supported “the cause” or were part of the Occupy movement there. And Occupy Detroit organizers are fully aware of this divide and trying to address it.

Occupy Pittsburgh was at least 20 percent African-American, all of whom were very active in the work and activities there. Baltimore was heavily African-American when I visited about four weeks ago, and D.C. also had a large African-American contingent. Chicago was much harder to classify, even though I spent four days there, because they did not have a designated space, so it was much more fluid.

Nonetheless, it does appear there is not significant participation from various Latino communities outside of New York City. Part of that may be linguistic and cultural barriers the individual Occupy movements have not adequately addressed, and part of that is probably due to the fact that many Latinos feel under attack because of their actual or perceived immigration status and keep a low public profile.

Nittle’s beef is ultimately with the media for not covering this aspect of the movement, and she is right about that. But beating up on the mainstream media is like playing basketball against a two-legged frog: You’ll win every time. At the same time, be careful what you wish for. If we do probe deeper we will discover some unpleasant realities.

In New York City, I asked interviewees from low-income, people-of-color communities if there is much involvement from their neighborhoods. Two people from the Bronx, one from Brooklyn and one from upper Manhattan said there was little participation because – and this was in their words – people in their communities were largely “ignorant and uneducated.” One blamed it on the media for presenting the protesters as a bunch of “smelly, noisy hippies.” Then again, this is more than a month ago and many people-of-color groups are active from these same neighborhoods, so one cannot make a sweeping conclusion about one neighborhood like the South Bronx or Harlem.

Still, one can say this is a movement largely led by white youth, which is obvious if you spend a few hours at almost any occupation. But largely does not mean completely, and it does not mean there are not all sorts of age, gender and racial variations according to the day of the week, the region and the particular politics and organizing strategies of each occupation.

This is about politics, not race

One last caveat: Do not judge a movement by its numbers. It’s still about the politics. The base of the Democratic Party is around 40 percent people of color, perhaps even more. Nonetheless, the Obama administration’s policies have devastated people of color, and the Democratic Party has been hostile to the plight of the poor for 20 years, who are disproportionately black and Latino.

This is the party that ended welfare, oversaw a huge increase in policing and prisons during the 1990s, has comforted Wall Street as the subprime crisis has decimated people-of-color communities, has failed to address the jobs, healthcare, student debt or immigration crisis in any way that helps the poor or low-income communities. This is a party that is waging six separate wars, defends a trillion-dollar annual military budget and still wants to cut Medicaid, Medicare and Social Security.

So just because there is a large people-of-color composition in an organization does not translate into politics that address those communities’ needs. If we take a look at the politics of Occupy Wall Street, it is the only meaningful force in America that is directly addressing the crises in the black and Latino communities and offering viable solutions. And that’s what ultimately matters.