Grammer\'s gifts make a cynical political drama essential viewing, even as the show finds its footing 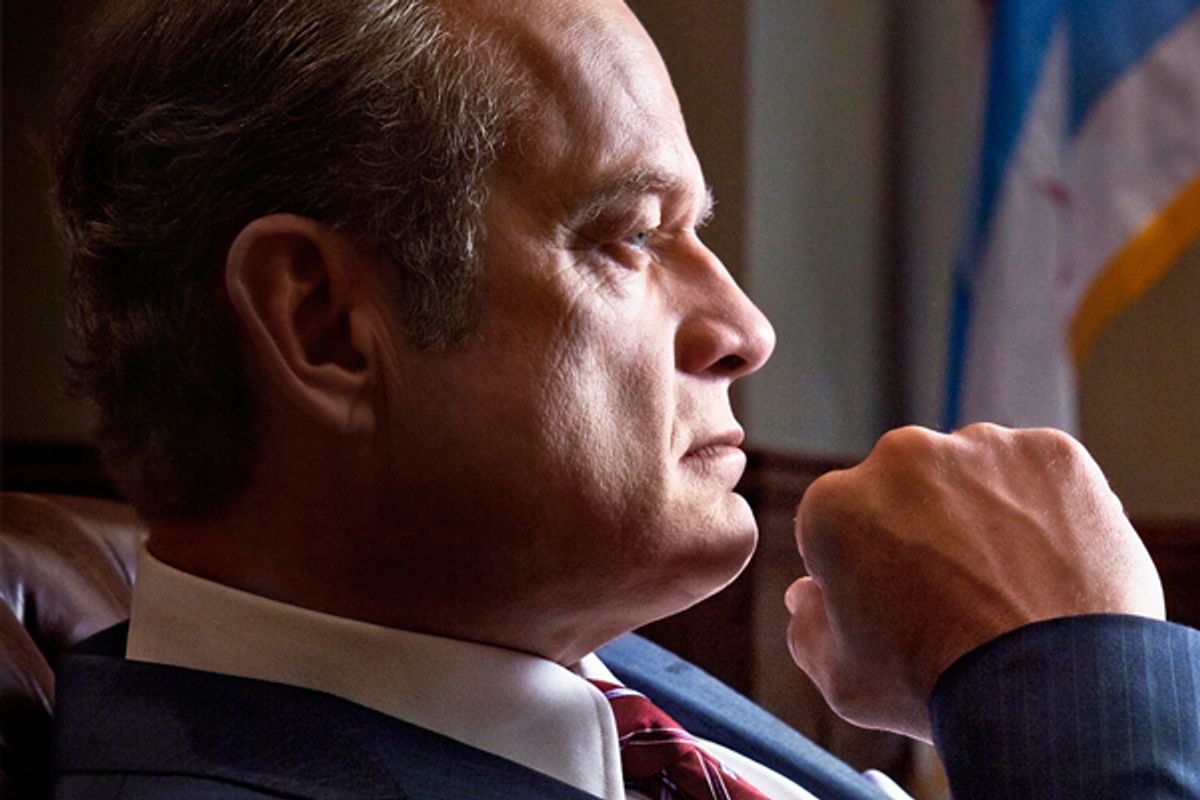 The devil is in the details: Mayor Tom Kane (Kelsey Grammer) looks inward on "Boss." (Lionsgate/Starz)
--

As a victory over typecasting alone, Kelsey Grammer's performance on "Boss" is impressive. The actor spent 20 years on two network shows playing just one character, metrosexual fussbudget Frasier Crane. But when you watch him play Tom Kane on "Boss" (Starz, Fridays, 10 p.m./9 central) -- a Chicago mayor plotting the downfall of political foes while secretly medicating a potentially deadly neurological disorder -- that past association never enters the picture. Grammer carries himself not like a lightweight impersonating a heavyweight, but as the real thing -- a deal-maker and arm-twister, a gangster who ruins lives with a pen instead of a gun, and a man who systematically alienated the people he should be leaning on during the darkest period of his life.

As overseen by series creator Farhad Safinia and directed by a talented group of filmmakers -- including co-executive producer Gus Van Sant ("Milk"), Jim McKay ("Everyday People") and Mario Van Peebles ("New Jack City") -- "Boss" is not yet up to Grammer's level. The show is too contrived, visually busy and overheated, like "The Wire" compacted into a comic book, and there are too many unbelievable scenes and unconvincing performances. Icy-veined idealist Ben Zajac (Jeff Hephner) -- handpicked by Kane to run against a weak sitting governor -- seems scripted and calculating even when his character is supposed to come across as spontaneous and authentic, and the character's affair with Kane's young female adviser, Kitty O’Neill (Kathleen Robertson), plays like a film noir plot grafted onto a civic melodrama. They rut in a public stairwell mere moments before Zajac gets in a car with his family; you'd think his wife would smell Kitty's, er, perfume. (Almost nobody on "Boss" has sex in a bed; it would be too "network.")

Grammer's performance and Kane's transformation/disintegration elevate the show. Grammer played Macbeth on Broadway over a decade ago; now he's playing a modern tragic hero in Shakespeare-flavored urban pulp, showing dramatic colors that most viewers haven't seen. Kane orchestrates political scandals and cheats on his wife Meredith (Connie Nielsen) with his senile mentor's nurse. He buys experimental drugs from dealers after midnight and surveills himself via closed-circuit TV. He zones out during a council meeting and fixates on the spastic tapping of his fingertips. He's a powerful and potentially great man who's about to be leveled by his own arrogance and by the karmic return of old sins. The character might seem silly, or merely revolting, if Grammer didn't infuse Kane with vulnerability and regret. He's doomed and he knows it. As the title song declares, "Satan, your kingdom must come down."

At least some of this performance must come from experience, for better or worse. Kane is man who's comfortable living in the public eye, being kissed up to and wielding potentially life-ruining power. Ten years ago, Grammer was one of the highest paid actors on TV, as financially important to NBC then as Charlie Sheen was to CBS last year, and nearly as plagued by drug, alcohol and relationship scandals. He's suffered enough tragedies -- some self-inflicted, others horribly random, including the murders of his father and sister and the accidental deaths of his twin half-brothers -- to power several country-western careers. (He's also a right-winger in a left-leaning industry, but I can't see that this colors his performance, or the show's attitude toward Kane, the Democratic Party or Chicago. The mayor is  a cynical man in a cynical town, and he has plenty of company.)

But there's more going on here than a celebrity strip-mining his life. Only an eloquent, classically trained actor with alpha male menace could put this part across. I love the moment near the start of last week's episode when Kane is walking down a Chicago street, talking on a cell phone to his chief adviser Ezra Stone (Martin Donovan, also excellent), feeding Stone viciously leading questions which Stone then recirculates to a sympathetic reporter covering a press conference with the sitting governor, McCall Cullen (Francis Guinan). Cullen is being secretly smeared by Kane with made-up charges that he's sleeping with a young man in Florida. It's like the bit in "Broadcast News" where Albert Brooks feeds questions to Holly Hunter, who feeds them to William Hurt's airhead anchor, except here the intent is to malign. But Grammer doesn't take obvious delight in Kane's gambit; it's one more arrow in the mayor's quiver. Better still is the scene in episode three where Kane upbraids Cullen. When Grammer says, "Thank you for your help, governor," he puts implied air quotes around both "help" and "governor." It's verbal vandalism.  The mayor might as well have stuck two thumbtacks in the governor's forehead.

I haven't been this fascinated by a lead male performance on a new series since Bryan Cranston (no doubt Grammer's career makeover inspiration) stomped out of that car wash on the pilot of "Breaking Bad." Kane is theatrical and life-sized, scary and sad, ridiculous and oddly affecting. We're four episodes into the debut season of "Boss" (the new installment airs tonight), and already I'd stack Grammer's performance against the best of Cranston and other nasty cable heavyweights: Ian McShane and Gerald McRaney on "Deadwood"; Michael Chiklis on "The Shield"; James Gandolfini on "The Sopranos."  The devil is in the details.