Occupy Wall Street looks ahead to 2012

The all-consuming presidential election season looms. How will Occupy respond? Does it have to? 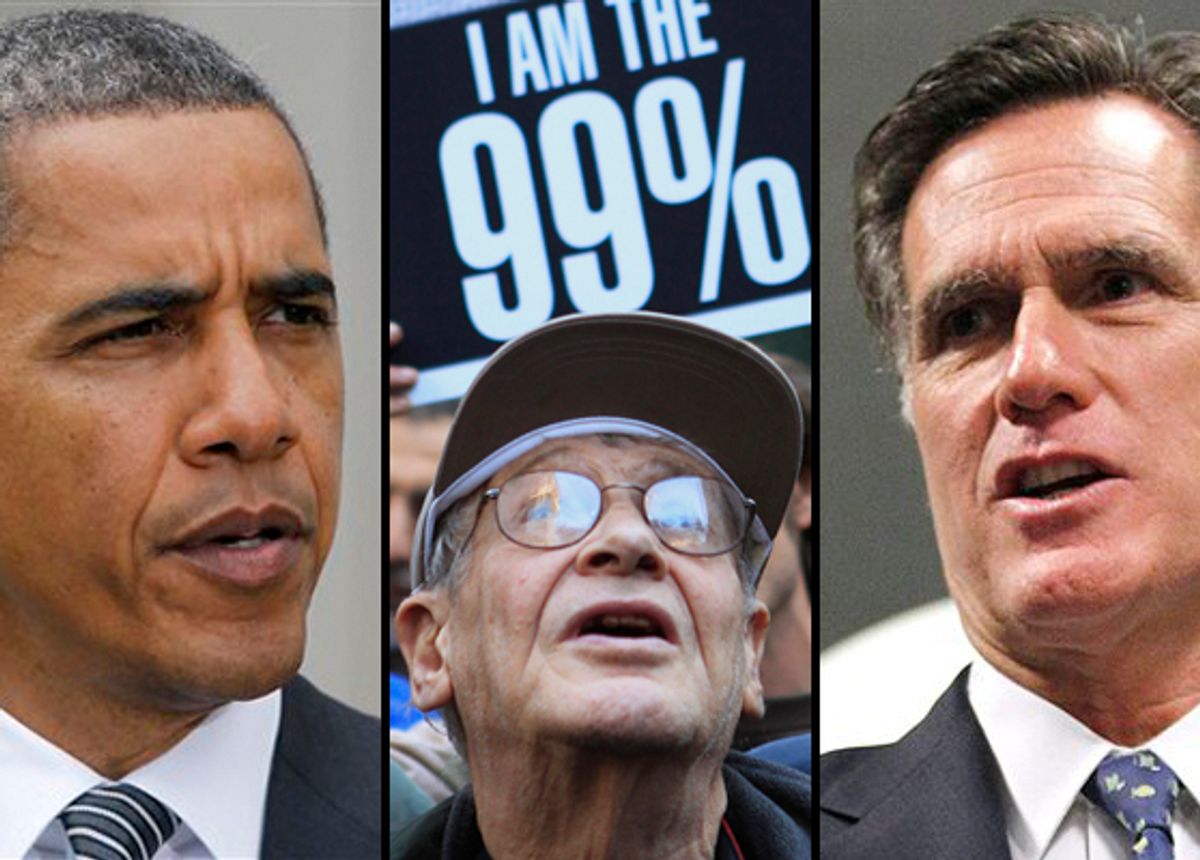 Sometime early next year, the mainstream media will begin focusing on the presidential race to the exclusion of virtually every other political story. This presents a challenge for Occupy Wall Street, which has both eschewed electoral politics and grown in part because of intense national media attention.

Will Occupy change how it operates when the mainstream media starts interpreting everything through the prism of presidential politics? Will a significant chunk of occupiers mobilize for Obama, when Democrats start whipping up fear of a Romney presidency? Might the occupiers instead pursue an effective issues-based strategy? Or will the movement ignore traditional politics and pursue other avenues for change? Will Occupy even exist as a relevant force by Election Day 2012?

Occupiers around the country are starting to consider these questions; those who haven't will be forced to soon.

The first thing to keep in mind in thinking about Occupy and 2012 is the heterogeneity of the movement. Ask 10 occupiers what they think the movement should do in 2012, and you'll get 10 different answers. It's difficult to imagine the Occupy movement nationally -- or even Occupy Wall Street in New York -- coalescing around one particular response to presidential politics.

Interviews with occupiers in New York suggest that factions within the movement will focus their activism in many different directions at once next year. One faction is likely to pressure candidates on specific economic justice issues; others will protest and perhaps disrupt political events; and some will ignore the election entirely.

In Zuccotti Park, a reporter can find pretty much whatever he or she wants. Thus I've encountered a Brooklyn man distributing voter registration forms in the park (click for full size) …

… and also anarchists manning a "Vote Nobody 2012" booth (click for full size):

Everyone agrees that Occupy has put wealth inequality and Wall Street corruption closer to the center of the national political discourse than it was six weeks ago. That in itself will have an impact on the presidential race. But it would be neither wise nor effective for the young movement to try to play the inside game of presidential politics, argue some participants.

"If things are going to shift, my take is that sustained organizing around issues and being a squeaky wheel has a shot. Organizing around candidates, parties, elections will not do it," says Bill Dobbs, a member of Occupy's press team and a longtime New York activist. "That means not ignoring electoral politics or the people in power but keeping them jumping. Staying at an arm's length rather than discovering that kiss on the cheek from a politician quickly turns into a suffocating bear hug."

There are at least three Occupy working groups in New York that are focused on how to interact with policy and the electoral politics.

The demands working group is focused on coming up with policy goals that could, in theory, lead Occupy Wall Street to narrow its focus and pressure candidates to support specific legislative priorities during the election. But the demands group's first proposal, for a massive public works program that would lead to full employment, went nowhere late last month when it was brought before the general assembly. Some people expressed hostility to the very idea of demands.

There is also a politics and electoral reform group. On Sunday it came to consensus on a document calling for experimentation with various reforms "to curtail the influence of corporations and narrow political factions over our system of government," according to T.J. Frawls, a 33-year-old Harlem man who is a member of the group. Between 30 and 35 people attended that meeting, held at 60 Wall Street, he says. The group now plans to bring the document -- which mentions ideas like ballot access reform, proportional representation, and making Election Day a national holiday -- before the general assembly at Zuccotti Park to see if Occupy Wall Street as a whole will endorse the idea.

"Obviously, the presidency and presidential politics comes up in our informal discussions, but it's not like we're sitting around mulling over the mindless minutiae of the 2012 presidential election the way the partisans of the Republican and Democratic parties and the corporate media do," says Frawls, a writer, musician and activist. "I personally think people accord the presidency much more power and weight than it rightfully deserves. I think it's more important to focus on local politics and work from the bottom up rather than think about these things from the top down."

Another member of the politics and electoral reform group has launched occupytheballot.org, which is encouraging occupiers to run for office. An occupier in Cincinnati has created occupationparty.org, which is primarily a vague list of requirements that candidates would have to meet to gain support from occupiers. Neither of these efforts appear to have gained any significant following, so far.

A third working group in New York,  the political action and impact group, is thinking about how to organize around issues that could come up in the presidential election. The group has been discussing which issues -- including opposition to fracking and a Robin Hood Tax on financial transactions -- to focus on, according to member Ted Actie.

Actie says the group has 130 members involved in discussions online, but only 10 or so have been showing up at weekly in-person meetings. This week, the group is seeking to come to consensus on a particular issue or issues to pursue. The group would then bring a proposal before the general assembly to seek solidarity from Occupy Wall Street as a whole, Actie says. There has also been talk of setting up voter registration booths in Zuccotti Park.

Occupy actions may also be focused in states that play a key role in presidential politics. Occupy Des Moines, for example, is planning "a series of events and demonstrations" leading up to the Republican caucuses to force economic justice issues on the radar.

New York Occupier Haywood Carey, who previously worked as a political consultant and organizer for Democratic and labor-affiliated campaigns, argues that the movement is too young to begin considering questions about electoral politics.

"There is an inherent distrust and disdain for politicians here," says Carey, who has been sleeping in Zuccotti for a month. "That doesn't mean that we don't care about politics and what goes on in politics. We are still a movement in our infancy."

Carey adds: "We're going to continue doing exactly what we're doing. Whether the media picks up on it or chooses to talk about haircuts, it doesn't matter … The really bottom-line answer to this is we haven't made up our minds yet. If we become a PAC and Dick Armey comes and takes our group over, I'm not going to be a part of this anymore and neither will a lot of other people."