Like Bill Clinton 23 years ago, he shows that the best thing to do if you become a national joke is to laugh along 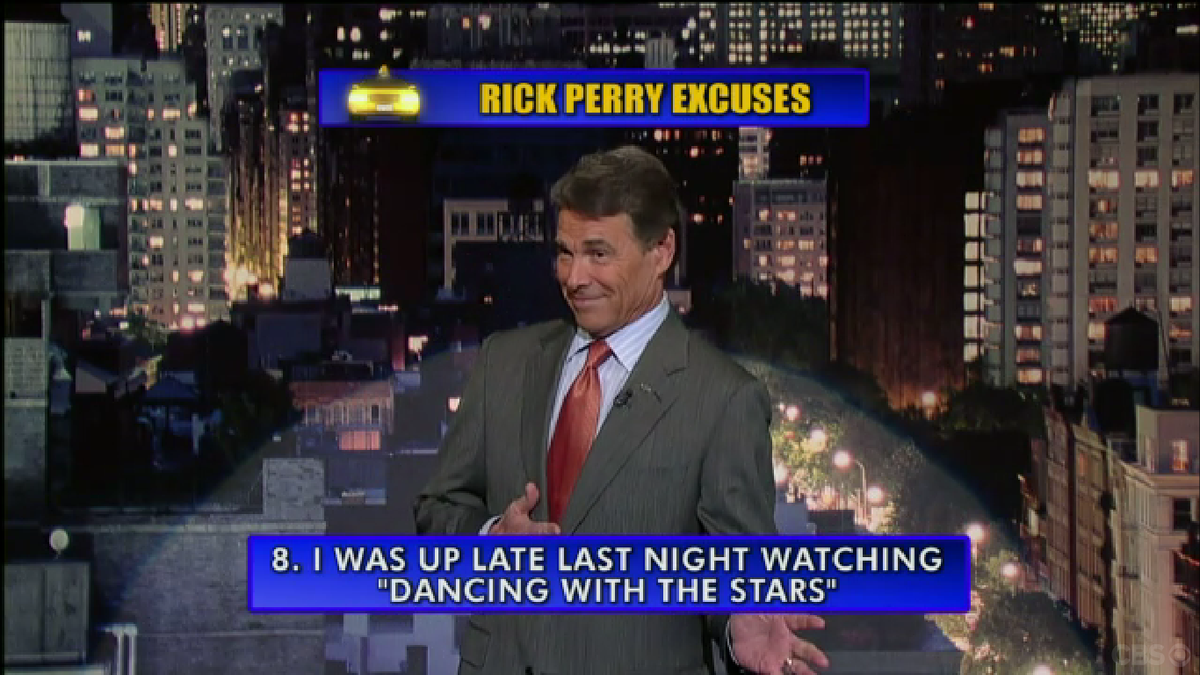 Rick Perry took a page from Bill Clinton's book last night, using a surprise appearance on a late-night comedy show to try to undo some of the damage from his epically painful debate flub the night before. The Texas governor walked onto the stage about 20 minutes into David Letterman's CBS show to present the "Top Ten Rick Perry Excuses" for the debate, in which he struggled mightily to recall the name of one of the three Cabinet departments he's pledged to eliminate:

9. I don’t know what you’re talking about. I think things went well

8. I was up late last night watching “Dancing With the Stars"

7) I thought the debate was tonight

6) Hey, listen: You try concentrating when Mitt Romney is smiling at you. That is one handsome dude

3) I really hoped it would get me on my favorite talk show, but instead I ended up right here

1) I just learned Justin Bieber is my father

Honestly, this may have been the single smartest strategic move Perry has made since entering the race.

The fallout from his debate performance was swift and brutal. During the debate, his Intrade standing crashed to new lows, and when it was over, commentators rushed to put toe-tags on his candidacy. It was so bad that Michele Bachmann went on CNBC to say that she and her fellow candidates all felt sorry for Perry.

His initial damage control efforts relied on traditional spin. "I may have forgotten (the Department of) Energy, but I haven't forgotten my conservative principles," he said. But the damage for Perry was far too deep for that to do any good. After all, Wednesday's debate was merely the latest in a long line of alarmingly bad public performances for Perry. Most Republican opinion-leaders already seemed to be writing him off; this latest episode only underscored why. And the clip was so widely circulated on Thursday that Perry had become a national punch line; even people who don't follow politics were laughing at him.

The only thing to do in a situation like that is to stop making excuses and start laughing along -- and the Letterman show offered Perry the perfect opportunity to do just that. Yes, he was reading lines someone else had written for him, but he managed to come off as playful and charming, showing gawky self-deprecation that seemed ... likable.

In a way, Perry's Letterman appearance calls to mind Bill Clinton, who famously bombed badly at the 1988 Democratic convention, where his nominating speech for Michael Dukakis ran for so long that the audience erupted in cheers when he said, "In closing..." For Clinton the intense ridicule was made all the worse by the fact that the speech had been intended as his unofficial introduction as a national leader -- one of his first big chances to make an impression in advance of a future White House bid. His national prospects, the media immediately declared, had dimmed considerably because of the speech.

But then a week later Clinton flew out to California, accepting an invitation to appear on Johnny Carson's "Tonight Show." The host began by mimicking Clinton's convention speech, offering a painfully long, dragged out introduction of his guest. When Clinton finally sat down and started to answer the first question, Carson pulled out an hourglass and put it on the desk. The audience roared, and so did Clinton. For the rest of the segment, Clinton cracked one joke after another about himself, claiming that he'd intentionally botched the convention speech because "I always wanted to be on this show" and that he'd only been trying to make Dukakis' own speech look good by comparison. In another segment, Clinton grabbed a saxophone and joined Doc Severinsen's band to play "Summertime."

The reviews were glowing and pundits scrambled to retract their Clinton obituaries. John Brummet of the Arkansas-Democrat Gazette, for instance, wrote:

Let me say this: Being charming, witty, self-effacing and warm on the " Tonight Show," being himself in other words, has brought Clinton back from the ashes of the crash-and-burn of the week before.

Four years later, Clinton really got the last laugh, when he began his acceptance speech at the 1992 Democratic convention by claiming that he was just there "to finish that speech I started four years ago."

This isn't to say that Perry is on his way to the White House. He's inflicted grievous damage on his own campaign and political reputation in the last few months; he didn't just deliver one bad speech. But his Letterman Top Ten List will probably get a lot of play today, and it figures to cast Perry in an unusually favorable and sympathetic light. He may be in for some of the best coverage he's received as a candidate.