It's been a decade since Flight 587 crashed over Queens, N.Y. -- a milestone worth noting 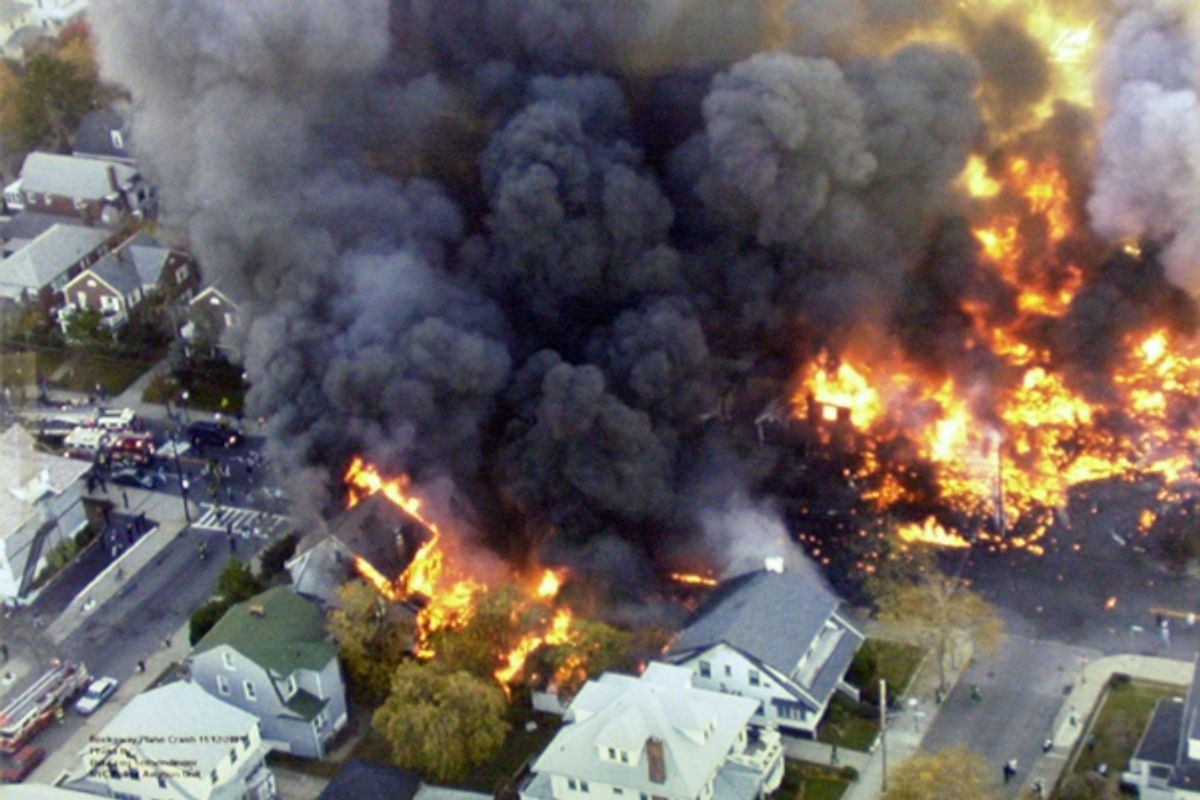 I always wondered if I'd get around to writing this little column. The superstitious part of me was worried about posting it even a day early, in fear that something awful might happen. But here we are and here it is:

Today, Nov. 12, 2011, marks the 10th anniversary of the crash of American Airlines Flight 587 near Kennedy Airport. Flight 587, an Airbus A300 bound for Santo Domingo, went down in the Belle Harbor section of Queens moments after takeoff from JFK airport killing 265 people. The first officer had overreacted to wake turbulence produced by a Japan Airlines 747 ahead. This, combined with a peculiarity in the sensitivity of the plane's rudder control system, ripped off the tail and sent the plane plummeting into a residential neighborhood.

I was flying back from Europe that afternoon, and my plane was one of the first to land after JFK reopened to traffic. Smoke was still rising from the crash scene. Only a few miles beyond the gray plume I could see the vacant chunk of sky that had been occupied by the World Trade Center.

Flight 587 was well known among New York City's Dominican community. Merengue star Kinito Méndez paid a sadly foreboding tribute with his song "El Avion" in 1996. "How joyful it could be to go on flight 587," he sang, immortalizing the popular daily nonstop.

This was a catastrophe, to be sure. But we've since reached an important, somewhat remarkable milestone: The crash of Flight 587 was the last multiple-fatality crash involving a major U.S. airline.

There have been several terrible accidents involving regional planes -- all of which have been discussed in this column, from the Air Midwest crash in 2003 to the 2006 Comair crash at Lexington, to the Colgan disaster outside Buffalo in 2009. And in 2005 a young boy in a car was killed when a Southwest Airlines 737 skidded off a snowy runway at Chicago's Midway airport. Yet amazingly, an entire decade has passed since the last large-scale crash involving a mainline U.S. carrier. Somewhere on the order of 5 billion passengers have flown aboard the country's biggest airlines in that span, aboard some 35 million flights.

Ten years is a record unsurpassed in virtually the entire history of U.S. commercial aviation.

Absence of a headline tragedy does not indicate an absence of problems, of course, and about the worst thing we could do is rest on our laurels. But despite unprecedented public contempt for the legacy airlines, and despite the fiscal devastation they have endured over the past decade (five bankruptcies and counting), they've nevertheless maintained a nearly perfect safety record.

How we got to this milestone is mainly the result of better crew training and, perhaps to a lesser degree, better technology. We've engineered away what used to be the most common causes of accidents.

It remains to be seen how the media will note this anniversary, if at all. And when finally this streak comes to an end -- and let's be realistic, it has to end at some point -- what then? The worst thing about this inevitable crash will be the loss of life. The second worst thing will be overreaction and a lack of context. Ten years forgotten. Because plane crashes, not a lack of them, are the big news.