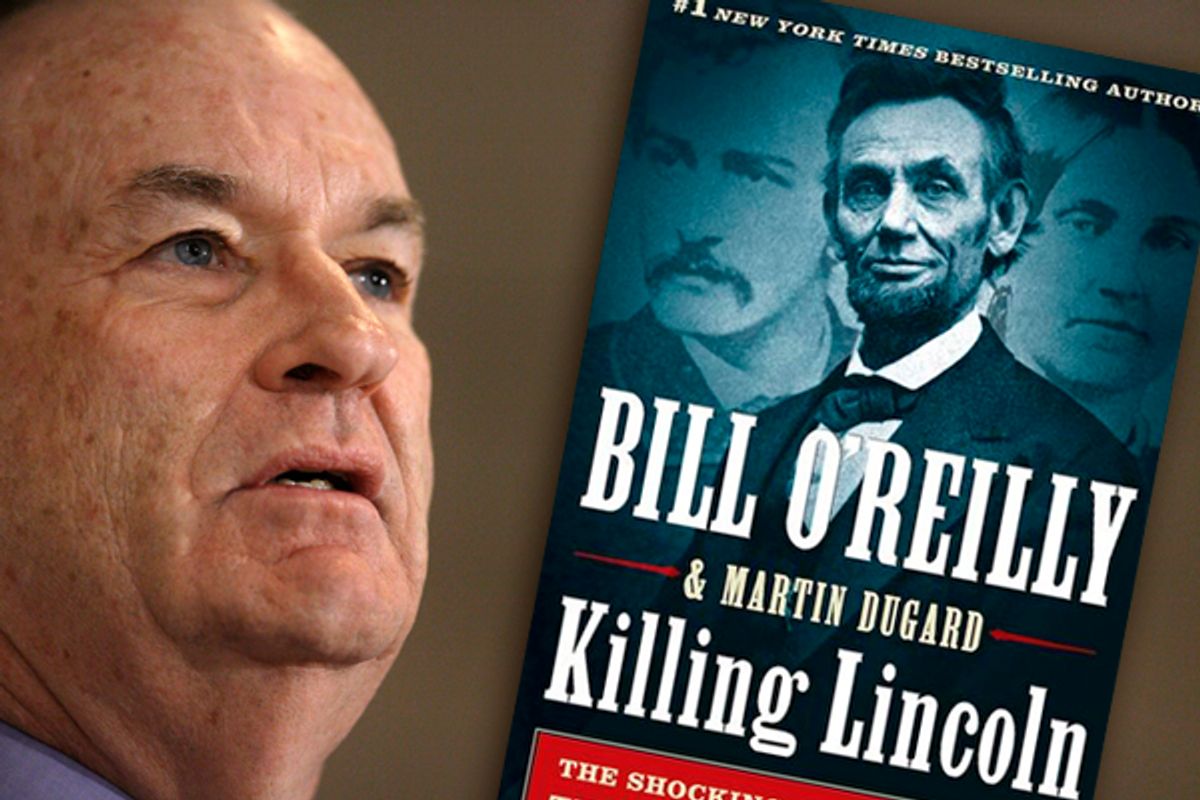 A reviewer for the official National Park Service bookstore at Ford's Theatre has recommended that Bill O'Reilly's bestselling new book about the Lincoln assassination not be sold at the historic site "because of the lack of documentation and the factual errors within the publication."

Rae Emerson, deputy superintendent at Ford's Theatre, which is a national historic site under the jurisdiction of the National Park Service, has penned a scathing appraisal of O'Reilly's "Killing Lincoln: The Shocking Assassination that Changed America Forever." In Emerson's official review, which I've pasted below, she spends four pages correcting passages from O'Reilly's book before recommending that it not be offered for sale at Ford's Theatre because it is not up to quality standards.

For example, "Killing Lincoln" makes multiple references to the Oval Office; in fact, Emerson points out, the office was not built until 1909.

At one point O'Reilly writes of generals Ulysses S. Grant and Robert E. Lee, "The two warriors will never meet again." In fact, according to the review, Grant and Lee met for a second time in 1865 to discuss prisoners of war.

I've reached out to O'Reilly's publisher, Henry Holt, for comment, and I will update this post when I hear back.

O'Reilly's book, co-authored with Martin Dugard, has spent six weeks on the New York Times bestseller list and is currently in the #2 spot, behind only Walter Isaacson's blockbuster biography of Steve Jobs. Publisher Henry Holt said late last month that the title had sold nearly 1 million copies, the AP reported. The company also announced O'Reilly has agreed to write two more books, one of which will be a history of a not-yet-specified president.

O'Reilly's book has received friendly media coverage from big outlets ranging from the New York Post to NPR. (Though the NPR piece had to be corrected because O'Reilly misstated the number of handwritten copies of Lincoln's Gettysburg Address.)

One dissenting take came from University of New Hampshire history professor Ellen Fitzpatrick, who questioned the book's sourcing in a Washington Post review.

'Killing Lincoln' also resurrects an old canard debunked long ago by serious historians: that Secretary of War Edwin Stanton was involved in the plot to kill Lincoln, in the hope that he might ascend to the presidency. There is no credible evidence to support such an assertion, nor do O’Reilly and Dugard provide any. (In fact, 'Killing Lincoln' offers no direct citations for any of its assertions. In a three-page summary under the heading 'Notes,' the authors assure readers that they have consulted “hundreds” of sources; they list the secondary sources they have relied on.)

The book is also getting hammered in customer reviews on Amazon, with some charges of historical inaccuracy and an average rating of just two stars out of five.

The following errors are noted in chapters the reviewer was well versed in the subject matter. Other chapters may also have similar findings noted by subject matter experts or other reviewers. These observations are not included.

“He furls his brow . . . .” furl – nautical term to compact, roll up; furrows – narrow grove, depression on any surface, i.e., furrows of a wrinkled face

On April 10, 1865 Generals Lee and Grant met a second time at Appomattox Court House, Virginia. At that second meeting General Lee requested that his men be given evidence that they were paroled prisoners - to protect them from arrest or harassment. 28,231 parole passes were issued to Confederates.

December 30, 1862, fire broke out and gutted the interior leaving only the blackened walls standing.

“Grant meets with Lincoln in the Oval Office.”

“On the nights when the Lincolns are in attendance  . . . . . . . . . and a portrait of George Washington faces out at the audience, designating that the president of the United States is in the house.”

Messenger arrived at the theatre from the White House about 10:30 a.m. (April 14, 1865) to reserve the presidential box for the performance that evening.

“Ford added an additional touch to these normal decorations of the presidential box when he placed a gilt-framed engraving of Washington its central pillar for the first time.”

“So Ford’s Opera House, as the theater is formally known, is his (Booth) permanent address.”

During the period from December 1861 – February 1862, Ford rented the theatre to George Christy, who advertised the building as “The George Christy Opera House”.

After renovating the theatre in February 1862, the theatre reopened in March 1862 under Ford’s name: Ford’s Atheneum.

In February 1863 work started to rebuild the theatre after the December 30, 1862 fire. The theatre known as “Ford’s New Theatre” reopened on Thursday, August 27, 1863 and later referred to as Ford’s Theatre.

The presidential party occupied two boxes, # 7 and #8 which, when combined, are referred to as the presidential box; the state boxes are build on the stage proper; the distance from the state box to the stage is 11 and ½ feet to 12 feet depending on what end the box is measured. This difference is based on the rake or slant of the stage towards the audience.

“Booth has performed here often and is more familiar with its hidden backstage tunnels . . . . .”

“In the southeast corner (of the stage) was a two-foot wide stairway along the south wall which led to the basement. This stairway also provided access to the orchestra pit and unhindered passageway from stage-right to stage-left through the basement and by the stairs along the north wall, to the small exit door at the rear alley. The passageway on stage-right varied in width according to the manner in which the scenery was piled along the north wall to the rear door. Generally this passageway was kept clear to provide for an orderly movement of stage scenery and for the unencumbered entrance and exit of actors awaiting their cues in the adjoining greenroom in the north wing. “

“Booth’s second act of preparation that afternoon was using a pen knife to carve a very small peephole in the back wall of the state box. Now he looks through the hole to get a better view of the president.”

“Despite all attempts to prove, without success, that the hole in the door to box 7 was bored by Booth that same afternoon, a recent letter from Frank Ford of New York City (to Olszewski, April 13, 1962) may clarify the fact. In part, his letter states:

As I told you on your visit here in New York, I say again and unequivocally that John Wilkes Booth did not bore the hole in the door leading to the box President Lincoln occupied the night of the assassination, April 14, 1865  . . .

The hole was bored by my father, Harry Clay Ford, or rather on his orders, and was bored for the very simple reason it would allow the guard, on Parker, easy opportunity whenever he so desired to look into the box rather than to open the inner door to check on the presidential party . . ..

Publication (Killing Lincoln) not recommended as a sales item in the Eastern National Bookstore located in the Museum at Ford’s Theatre National Historic because of the lack of documentation and the factual errors within the publication.