For nearly four decades, I have missed out on one of the most essential parts of human nature: Romantic love 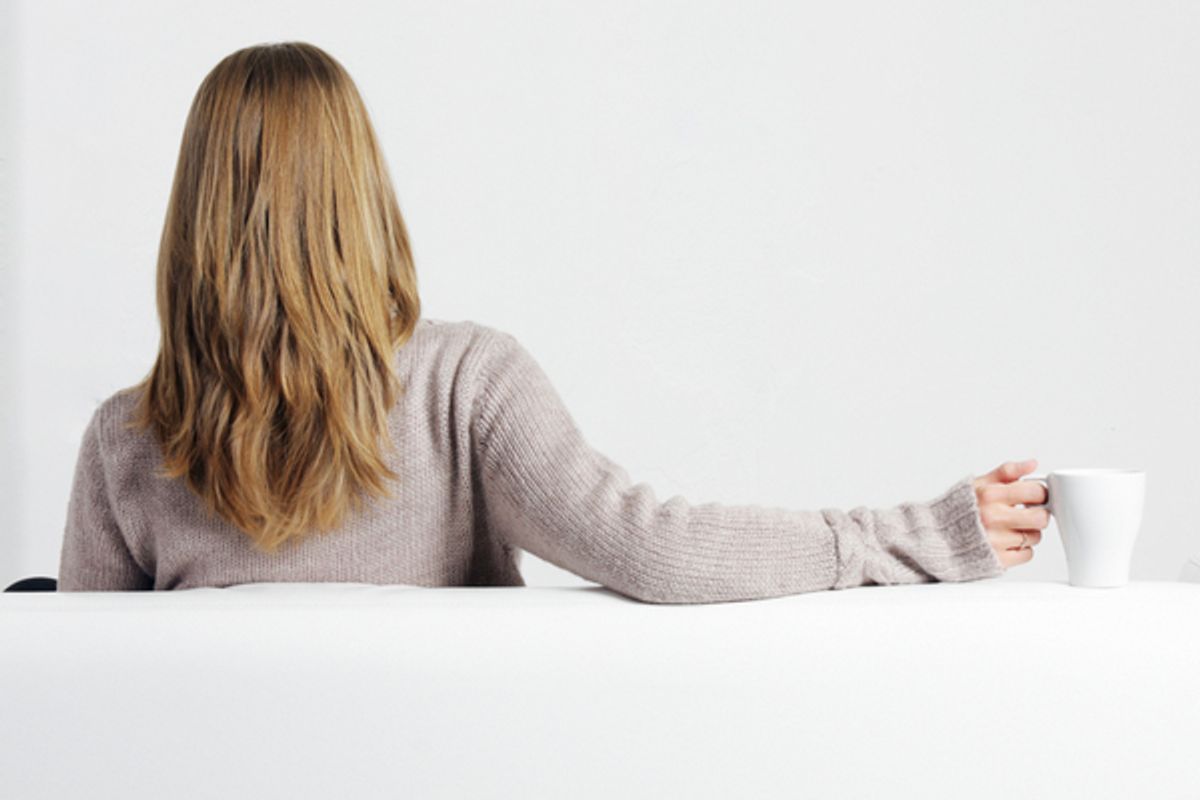 A few years ago at my second cousin’s bat mitzvah, one of my aunt’s friends approached me. She dispatched with three sentences of small talk before she placed her hand on my shoulder and leaned forward. “So, have you met anyone? Do you have a boyfriend?" she asked. Then she lowered her voice. "Or even a girlfriend?”

I guess I should have expected my extended family to publicly speculate about my sexual orientation. My aunt’s children all attained marital status in their 20s. Believe me, they had no choice: In that circle, you’re nobody until somebody has compromised your surname.

But I’m not just single. At 38 years old, I have never been in a serious relationship. You read that right. That wouldn’t be so embarrassing if I were 20. Or even 27. But after nearly four decades on earth, I have managed to miss out on one of the most essential components of human nature: romantic love.

Don't get me wrong -- I've had boyfriends, bed buddies and dates. I’m not quite America’s answer to Susan Boyle. But I have managed to reach this age without a relationship that lasted more than six months. My teenage cousins have had more enduring romances. I’ve never experienced the agony of wondering if a marriage proposal was around the bend. I’ve never signed cards from the both of us. I’ve never even been able to bring a plus-one to formal events. If I were born a few generations earlier, I would have been relegated to house mother, schoolmarm or reclusive poet by now. Instead, I live in an age when female liberation allows me to recklessly dive in to any relationship I want.

Solitude set in early. I didn’t date in high school. Nothing quashes a teenage boy’s libido like a fat, near-sighted choir nerd. But that's no excuse. Bad skin, weight problems and an unapologetic affection for show tunes didn’t stop my fellow dweebs from finding love once they left the harrowing halls of secondary education.

If I’m honest, I spent the better part of my life sabotaging myself. In college I wrote papers and poetry that decried the trappings of marriage and children. During my 20s, I hung out with men I knew didn’t have any long-term potential as spouses or baby daddies. In my young mind, dating the server with a great sense of humor and an intermittent cocaine problem was a good idea. I naively thought my affection could heal him, make him quit drugs forever and commit to me. Instead he got fired from the restaurant where we both worked and dumped me after a month.

From 19 to 26, I had several short-term boyfriends — a waiter here, an artsy-fartsy type there. During my undergraduate days in Arizona, a fellow theater major took interest in me. A few weeks after we began dating, he invited me over to play Trivial Pursuit with him and his friends, every man for himself. I was a single slice away from winning when I touched his arm and teased, “See, we should have teamed up. Now I’m going to have to beat you.”

He picked up my pie and hurled it across his dingy apartment, causing the plastic parts to scatter. I should have known we were doomed then. Instead, I figured it out when he brought a date to one of my performances.

“Relationships are supposed to feel good,” my mother said as I boo-hooed into the phone, stage makeup sliding down my face. “You’ve been miserable since you starting seeing him. That just isn’t right.”

It would be easy to blame her for my table-for-one status. My mom did everything to keep our home intact. She cooked, set mousetraps, drove my brothers and me to school and supported our activities while working full-time and caring for my ailing father. I had a very stable childhood, but I watched my mother work 10 times harder than the rest of us to ensure it stayed that way. To my over-analytical (if somewhat misguided) way of thinking, I associated romantic attachment with servitude. I vowed to not have to endure such a seemingly thankless effort.

Women in my generation just think differently about settling down. If you asked my mom, aunt or just about any woman of their era, they would tell you that loneliness is a choice. Of course, they were subject to repressive social mores that thrust them into the arms of someone by their early 20s. It led to a 50 percent divorce rate. (Though I should clarify that my parents were together until my father’s death and my aunt and uncle have been married nearly 50 years.) But that importance placed on marriage back then also prevented the existence of women like me -- looking for the perfect piece of the puzzle that never quite arrives, supporting myself, but longing for a companion.

At times I think the sexual revolution really screwed me. My mom, who came of age at the dawn of the movement, taught me that I didn’t need a man to validate my existence. But she also raised me with retro convictions and the idea that sex should be reserved for marriage. I knew I wasn’t going to marry young like her, yet I struggled to embrace the power of my vagina. Many of my friends racked up multiple sex partners and didn’t think twice about one-night-stands. But the few times I engaged in such debauchery, I wound up with a personal infection that I interpreted as punishment for my transgressions. It's not like I was raised in a home of hellfire and damnation, but I was terrified of disappointing my parents. I felt like an after-school special: The good girl drinks too much and does the dirty. In the next scene, she sits remorsefully in the gynecologist’s office, her heels digging into the stirrups of shame.

I can't fault my folks for the kinds of guys I found attractive when I was young. Back then, I wanted the creative types who had potential to do great things but never actually did them. I met one such obnoxious but alluring dude during my Vegas years while waiting in line at the Einstein Bros. Bagels across from UNLV. He had blue eyes, just the right amount of stubble and wore aftershave that made him smell like a masculine ocean breeze.

Dates with the Bagel Boy consisted of anything we could do for less than $5. We listened to bad karaoke while feasting on a $2 French toast breakfast at Ellis Island Casino and Brewery. During $3 Bingo at Sam’s Town he enjoyed secretly exposing himself to me under the mess hall-style table. He was proud of his genitals and really enjoyed shocking me. Despite his crude behavior, I continued to see him because I found him irresistible.  Our most shameful cheap date came at the expense of a local Outback restaurant where he pretended that we had purchased a takeout meal but were denied our obligatory bread basket, so they gave us four loaves of fresh, free carbs. I hated the taste of deceit.

Bagel Boy occasionally threw gifts on my balcony: James Baldwin’s “The Fire Next Time” and Jack Kerouac’s “On the Road.” But expanding my literary palate was by far the most satisfying thing about that relationship. He only wanted me on his severely limited terms and didn’t exactly believe in fidelity. My brother Harris still loves to say that things went sour with the Bagel Boy because he dipped his bialy into someone else’s cream cheese.

For the next few years, I tried meeting men on AOL, eHarmony, JDate, Hurry Date and at various religious and secular speed-dating events. But it was useless. I didn’t know what the hell I wanted and was afraid of picking the wrong man. My travel agent once said that when you go to a smorgasbord, you leave hungry. What good is having unlimited options if you're too scared to choose?

The truth is, I’m ambivalent. On one hand, I want a husband and a child and all the milestones that seem to come so easily to most people I know. But I've become accustomed to the freedom of living alone. It requires little compromise and sacrifice. I love my (fairly) open schedule and the fact that I am only beholden to my pets. I never have to worry that a man will leave me if I don’t have one. I'm much more interested in emulating the woman my mother is now that her children are grown and my father is deceased: She is independent, successful and free.

Then again, I wonder about a life without children. My mother is my role model, but she also has a family of her own. That’s why I started to see a therapist, to work through all the conflict and fear and overthinking that keep me from getting out of my own way. Over time, I came to understand that it wasn't necessarily my failure to find men, but that the ways I reached out might not be suited to me. Speed dating isn't really the perfect fit for a timid woman who feels very far away from her own sex appeal, and who might always feel that way. And by the way, a lack of sex appeal might not even be a failure on my part; it might just be who I am. Although my hairstylist did suggest that I smile more. That sort of helps.

Two years ago a man I knew from one of my local hangouts sent me a friend request on Facebook. Within moments of accepting, he started to instant message me and make his prurient intentions clear. I told him that I wanted a relationship that would lead to marriage and children. He said he wanted those things, too, just not with me. I found his brutal honesty refreshing. No tension-filled dates, no discussing fake future plans, just a straightforward pursuit of pleasure. Since I'm not the kind of woman who exudes that come-and-get-it vibe, it was nice to be desired. I was lonely and aroused enough to take him up on his offer to meet.

But it wasn't enough. I stopped getting together with him, and now he claims that he’s open to the possibility of us becoming more than hookup buddies. This always happens. The less interested I become in a man, the more he seems to want me. Weren't these childish games supposed to end at some point? I know he's just spewing the platitudes he thinks I want to hear. I know that if I were firmly committed to getting what I want, I would excise him completely from my life. But I just can't. I know what I should do, and yet I don't do it. And maybe that explains more about why I'm still without a relationship at 38 than anything I can tell you.