Dead from the neck up

AMC's zombie show has craft and atmosphere; if only the characters weren't so insufferably earnest and dense 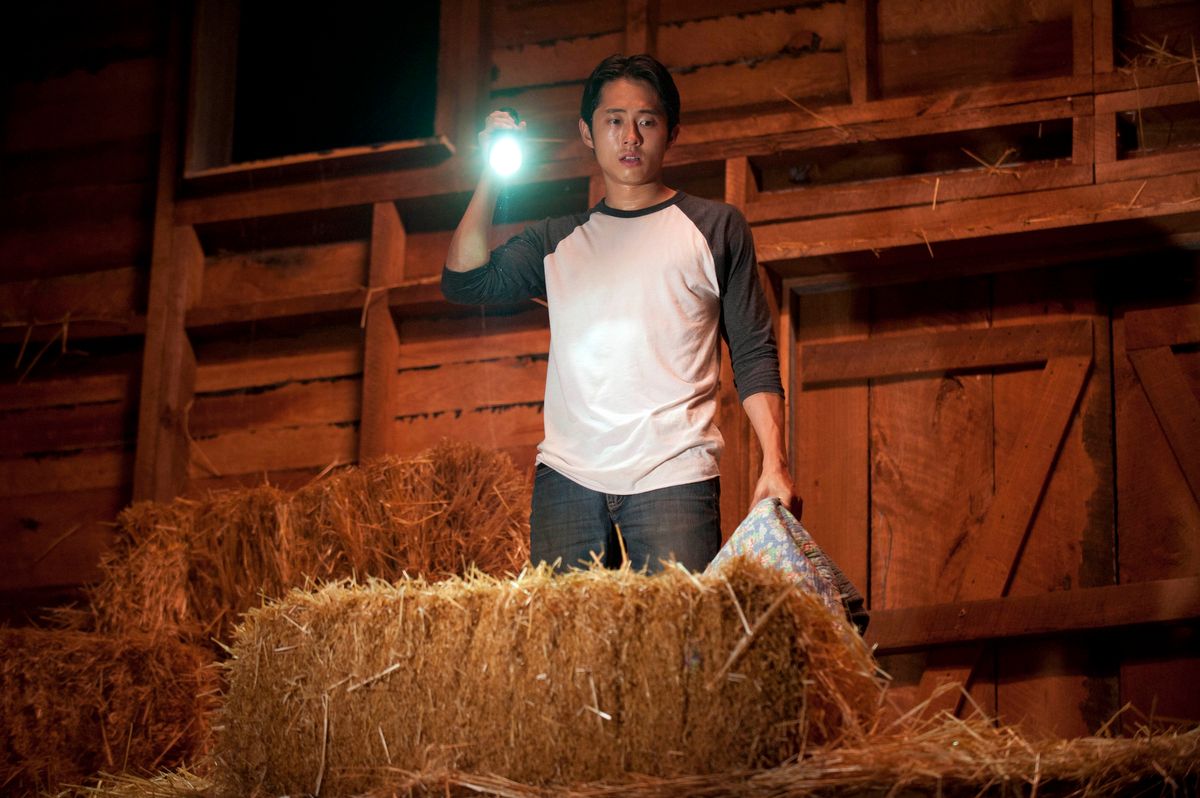 This recap contains spoilers for "The Walking Dead" Season Two, episode 5, "Chupacabra." Read at your own risk.

There were huge revelations on Sunday's episode of "The Walking Dead," including a tantalizing hint that the missing girl Sophie might still be alive, and a climactic reveal that the courtly old religious veterinarian Hershel (Scott Greene) was keeping captured zombies alive inside his barn, presumably in hopes of one day curing them. There was another big revelation last week in the form of a surprise pregnancy, Lori's.

But that's not enough to stave off charges that "The Walking Dead" is taking a Hamburger Helper approach to TV drama, padding out meager amounts of dramatic meat with bags of bland dramatic stuffing. Sophie has been missing for the entire season; Carl has been bedridden since the end of episode two; Lori found out about her pregnancy last week but still hasn't told Rick; etc. If you added up the screen time devoted to the genuinely interesting elements, they might total maybe ten minutes per episode, if that. The rest is wandering, suffering, and talking, talking, talking, courtesy of characters who are for the most part so naive and/or irritating that if you were watching them on a big screen at a drive-in movie theater, you'd cheer for them to be eaten.

The "WTF?" count in my "Walking Dead" notebook is nearing 200 by now, and this week's installment, "Chupacabra", added a few more, including the cutesy back-and-forth between end-of-the-world sex buddies Glenn (Steven Yeun) and Maggie (Laurie Cohen), complete with scribbled dinner-table notes; the protracted sequence of the wounded Daryl (Norman Reedus) falling down that cliff, then climbing up, then falling again; and that somebody-please-kill-all-these-stupid-characters moment when Andrea (Lauren Holden) mistook the returning Daryl for a zombie and winged him across the temple with a rifle shot. (I'm sure the producers didn't intend this as a "You can't trust women with guns" moment, but given the male-dominated power structure on this series, that's how it played.)

What a frustrating show. It does difficult and impressive things confidently while thoroughly fudging the basics. The openings of "The Walking Dead" are often misleadingly enticing, and this week's curtain-raising flashback to the early days of the undead apocalypse was no exception; I loved the spooky blue-white light on that gridlocked line of cars, the shot of jets roaring overhead, the panoramic image of Atlanta being napalmed, and the expression on Shane's face as he pulled the terrified Lori, his then-comatose partner's wife, close to him. (Jon Bernthal plays oily opportunism very convincingly; he seems more like a Richard Gere-style sociopath antihero with each passing week.) I also liked the subtle mirroring in two scenes -- the one where Shane tells Lori that he'll do anything to protect her and Carl (more emotional manipulation by a selfish bastard) and the moment where Sophie's mother Carol (Melissa Suzanne McBride) goes to Daryl's bedside and thanks him for his heroic efforts, and he can't even look her in the face. Shane believes he's infinitely better than he is, and Daryl (who was haunted in the woods by the image of his leering, sadistic, racist older brother, Merle) thinks he's infinitely worse.

There are some interesting elements bouncing around inside the scripts, including the notion that it makes more sense to try to cure zombies (also advanced in that laboratory one-off near the end of season 1) than to mow down as many as possible and hope the plague burns itself out someday. But the latter was explored more imaginatively in earlier zombie pictures, and the nihilistic violence-vs.-hopeful science conundrum is presented in such a clunky way here that it makes me want to throw things at my TV.

The bland philosophical discussions that keep slowing the show's master narrative like speed bumps also fail to distinguish between short- and long-term survival behavior. Shane's me-first attitude seems appalling when juxtaposed with Rick and Lori's ostentatious goodness, but he's not unreasonable to place a higher value on the people he really knows and loves than on whoever he happens to stumble across during his travels (this was nicely paralleled in the flashback opening, in that exchange between Carol and her husband about whether or not to give some of their rations to fellow escapees). And under these dire circumstances, Shane's hard attitude makes a certain harsh sense; ditto Hershel's insistence on setting "boundaries" between his people and Rick's. Lori's description of Shane thinking in terms of math was more reasonable than her distressed tone made it sound. God knows almost all of this show's "likable" characters could stand to toughen up, and shut up. "It's a wonder you people have survived this long," said Hershel, tending to Daryl's temple scrape. Yep.

I miss the pulp vitality that "The Walking Dead" displayed early on -- particularly the first couple of chapters, which concentrated on Rick's post-coma struggle to survive. We got a fleeting reminder of that energy in the sequence a few weeks back when we learned that Shane murdered Otis (Pruitt Taylor Vince) to assure his own escape from a zombie-infested high school. This series needs more of that kind of dark energy. It should be meaner, crazier and uglier. It's the end of the world as we know it, and nobody should feel fine.

In this sense, the reappearance of Daryl's brother Merle (Michael Rooker) in the form of a taunting specter was oddly invigorating. He's a trashy pulp character, reminiscent of one of those hate-filled human monsters that Stephen King writes so well (like George LeBay, the old man in "Christine" who calls everyone "shitter"). Last season I wrote Merle off as a redneck cliche, and I  suppose he still is, but at least he's exciting and disreputable, and every time he's seen -- or even discussed -- it gives a mostly torpid series a mild electrical jolt. Here, at last, was a character whom the writers were not remotely interested in making sympathetic. He's a representative of the reptilian brain, the "bad object" of therapy lingo granted physical form.

The sequences in which Merle teased and mocked and terrorized his younger brother into surviving had an accidental metaphoric dimension, one that the writers of "The Walking Dead" might do well to study. If these characters are going to survive, they're going to have to get in touch with their inner Merle. And if "The Walking Dead" is going to hold a big audience's interest over a long span of time, it's going to have to channel the B-movie and R-rated comic book luridness that a character like Merle represents, and make the storytelling speedier, bigger and bolder. Drop the quill pen and pick up a spray paint can, people. The zombie film is an surprisingly versatile and resilient genre, but one thing you can't do with it is try to make it respectable. That's a surefire way to sap a story's energy, as reliably final as a blow to a walker's brain.