Report from the Occupy Oakland raid

After days of fear-mongering, the police evicted us from our camp. But they underestimate our conviction 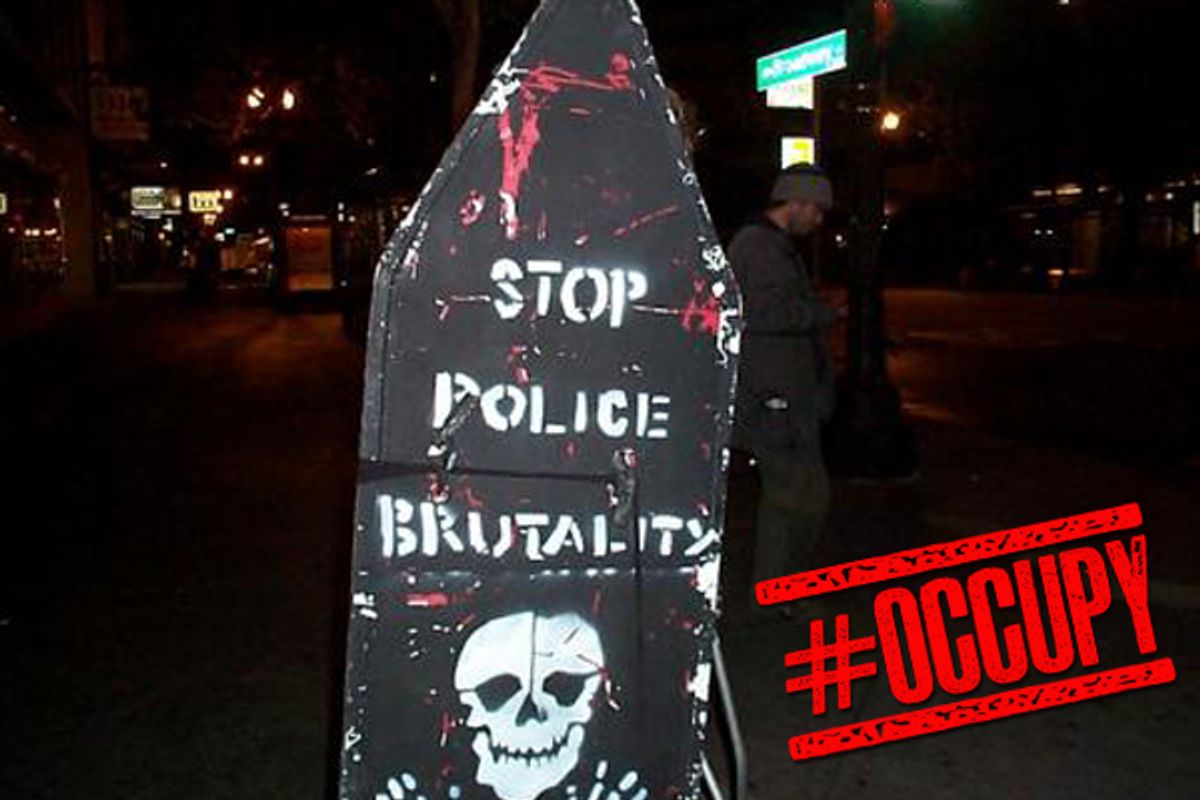 This piece originally appeared on Kevin Army's Open Salon blog. See something important happening at your local Occupy protest? Blog about it on Open Salon -- and we might cross-post your report on Salon.

Have you ever spent time waiting for someone close to you to die? Then you know the feeling of being mired in an unknown void, where one doesn't know if it will be that weekend, that afternoon, that hour. That sickened feeling in your gut, the premonition that something very bad will happen, an imminent threat staring you in the face, mixing up all your thoughts and emotions, holding you hostage, stealing the hours spent waiting and waiting.

I think the Oakland Police department and city officials understand those feelings well, and spent this holiday weekend exploiting them fairly effectively. At least on me. A feeling of dread crept in as I read the items that were leaked out, like the following email that was circulated on Sunday:

A highly coordinated law enforcement raid to clear out OO is planned to take place Monday morning early. Significant public safety mutual aid is being called in from neighboring jurisdictions. The goal is to permanently clear out the OO encampment of illegal activities. Expect to see overwhelming use of force by police directed to occupiers who refuse to comply.

Peaceful protesters are advised by police to stand down until the situation stabilizes. The general public is advised to stay away from the area during the action to avoid potential personal injury from incidental contact with conflicts.

No one has been able to verify the exact origins of the email, but all weekend I saw similar intimations of actions like on Twitter feeds, Facebook pages and the news. Each day of the holiday weekend eviction notices were handed out to the residents of the encampment. It felt like a war of fear, an attempt to break the protesters before any raid could happen.

The weekend started with a fatal shooting near the encampment on Thursday evening. Reports of whether and how this was related to Occupy Oakland are still a bit conflicted, so I'll keep out of that. The shooting shined an unfortunate light on one of Oakland's largest problems, the murder rate; there have been 91 killings so far this year. Rather than focusing on this, city leaders seized on the fatal shooting as an opportunity to justify evicting the camp, blaming Oakland's endemic issues on the protesters.

At a press event on Friday, Mayor Jean Quan made a sad attempt to pacify all sides by releasing a dove at a church where she had attended an interfaith Thanksgiving prayer breakfast. She said, “We need to peacefully close the encampment at City Hall and we're asking people to leave.”

Has anyone called to close down neighborhoods in Oakland where the other 90 murders happened? Of course not. People recognize that a small element makes life difficult for the vast majority of good residents in the neighborhoods where these murders typically occur.

At around 4:30 a.m., a few cops showed up. It was pretty close to 5 a.m. when the riot police arrived. Not in the huge numbers I expected, but enough. I'm entirely not sure since we couldn't get close to most of them, but I could see around three or four hundred. There may have been more standing by where I couldn't see them.

They blocked off the encampment and Broadway below 14th. By 6 a.m. they had arrested the people in the camp, and had begun tearing down the tents. By 7 a.m., the crowd had dwindled to maybe 100 people.

This all happened peacefully, at least as far as any of us could see. Once things were winding down, I tried to get into the camp to take pictures but was barred from entering, even with my mock press pass. At one point a handful of more “official” press was briefly permitted in. I spoke with a cameraman for the local ABC affiliate KGO, and he told me he was allowed in for two minutes and then had to leave.

There was no tear gas, no shooting of anything, no throwing of things. Though I'm saddened by the actions taken by the city and the police coalition, I'm grateful that both sides maintained a peaceful composure throughout.

Many people are mystified by why the continued occupation of public space is so important to this movement. I'm sure there are many answers. For me, by sharing space with the homeless, the movement begins to break down the barriers society has erected between different economic classes; it starts to bring about a new sort of equality.

By feeding the homeless, the camps illustrate the type of wealth redistribution OWS preaches: that those who have enough are willing to donate goods and time to help those that have nothing. I spoke with an Occupier named Toby, and he told me the Occupy Oakland Kitchen had been serving somewhere between 750 and 1,000 meals a day. On my list of good things to do, feeding the hungry is right up there at the top, whether it's through churches, or the Occupy movement.

The Occupiers plan to reconvene at the nearby Oakland Public Library at 4 p.m. today. Snow Park, the smaller and auxiliary camp, was allowed to stand. I drove by and saw about 20 tents there.

This morning I watched the camp end for the second time. I'm not going to declare it dead, not at all.  They are a force unlike anything I have ever experienced. I'm sure the Occupiers will find the strength and means to resurrect themselves again. Very soon. Whether it's in Frank Ogawa Plaza or somewhere else, or in some other form that has yet to be seen, I'm sure somehow, someway, they will continue.  As this will across the country, around the world.