Much worse: The powerful House Republican is Wall Street's field general in the fight against financial reform 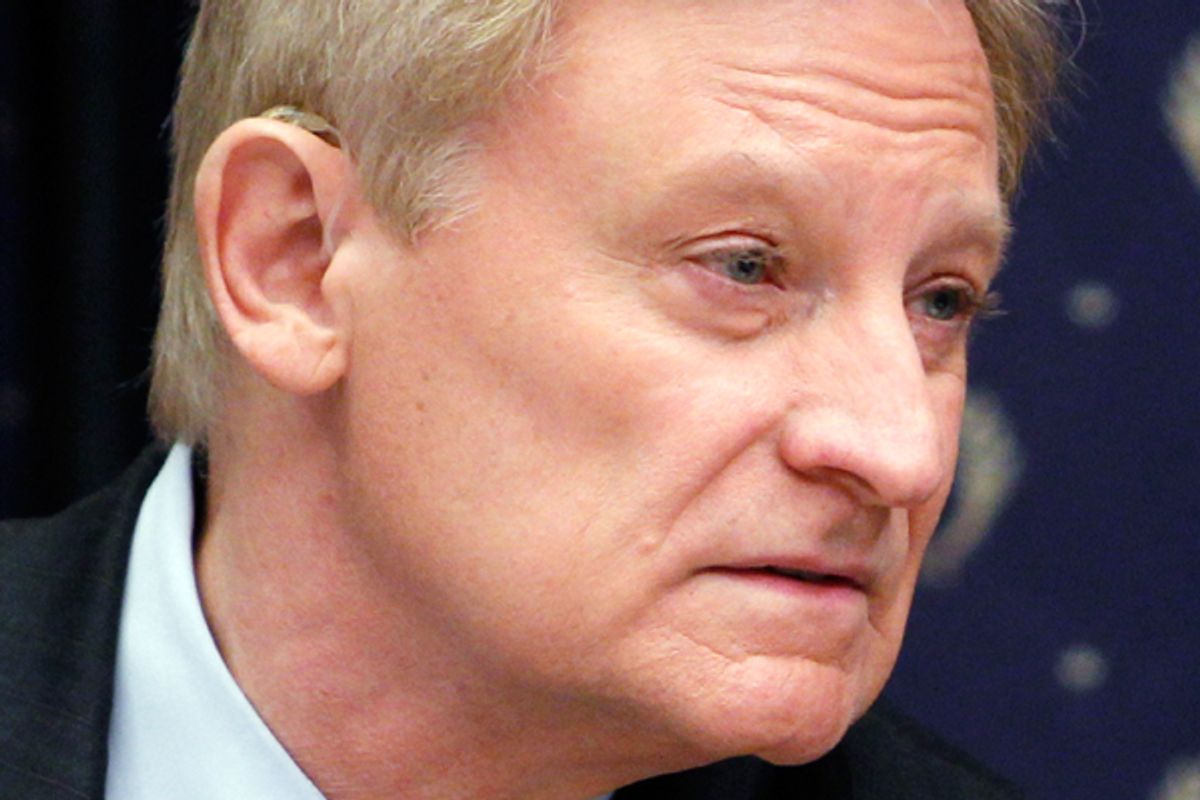 Left, right and middle -- everyone is disgusted at the news that Rep. Spencer Bachus, R-Ala., the current chairman of the House Financial Services Committee, took advantage of insider information to cash in on stock market speculation during the peak moments of the financial crisis.

Most outrageously, as detailed in Peter Schweizer's "Throw Them All Out," and summarized by Dave Weigel in Slate, in September 2008, shortly after being briefed by Treasury Secretary Hank Paulson and Federal Reserve Chairman Ben Bernanke on the distressingly dire short-term meltdown prospects for the U.S. economy, Bachus wasted no time betting that stock market prices would fall:

What Bachus and his colleagues heard behind closed doors was stunning. As Paulson recounts, “Ben [Bernanke] emphasized how the financial crisis could spill into the real economy. As stocks dropped perhaps a further 20 percent, General Motors would go bankrupt, and unemployment would rise ... if we did nothing.” The members of Congress around the table were, in Paulson’s words, “ashen-faced.”

Bernanke continued, “It is a matter of days before there is a meltdown in the global financial system.”...

The meeting broke up. The next day, September 19, Congressman Bachus bought contract options on Proshares Ultra-Short QQQ, an index fund that seeks results that are 200% of the inverse of the Nasdaq 100 index. In other words, he was shorting the market. It was an inexpensive way to bet that the market would fall. He bought options for $7,846 on a day when the Dow Jones Industrial Average opened at 8,604. A few days later, on September 23, after the market had indeed fallen, he sold the options for over $13,000 and nearly doubled his money.

That's bad. Whether it's as bad as even right-wing bomb thrower Andrew Breitbart suggests --" I think he should be in Joe Paterno-ville, he should be in exile” -- is something that we can let history decide. But there's a piece that's getting left out of this story, amid all the apoplectic rage and indignation. Profiting on insider information about the country's economic woes is reprehensible, but ultimately, its effect on the larger economy is minimal compared to the role that Spencer Bachus continues to play as Wall Street's designated point man for fighting against financial regulatory reform.

Bachus tends to speak in a slow Alabama drawl, but he's always been a fast worker. The day after the midterm elections handed control over the House to the Republicans, Bachus sent a letter to the Financial Stabilization Oversight Committee -- the regulatory body created by the Dodd-Frank bank reform bill to implement the new rules on financial reform -- that read as if it had been dictated by banking lobbyists. In particular, he took aim at the "Volcker rule," which was designed to limit the ability of banks to trade on their account, to the possible detriment of their clients, and, as we saw during the crisis, the health of the entire U.S. economy. Bachus' bald attempt to undermine regulatory reform becomes all the more ironic when one considers his own love for proprietary trading on his own account.

In another instance of what Sigmund Freud would have considered projection, Bachus has also been the leader of House Republican efforts to cripple the Consumer Finance Protection Bureau. But his most revelatory moment came when he acknowledged his true feelings on regulation in general. As reported by the Birmingham News Baucus said, "in Washington, the view is that the banks are to be regulated, and my view is that Washington and the regulators are there to serve the banks.”

So let's put this in perspective. Insider trading, by any elected official, Democrat or Republican, is appalling. I remember the week of Sept. 18 pretty well -- in fact, I can distinctly remember telling my children that in my entire life I had never been more scared of what might happen to the U.S. economy. The notion that a senior Republican walked out of a top-level briefing that week and immediately made a stock market bet shorting the U.S. economy is despicable.

But Bachus' fight to resist regulation of Wall Street is a crime with much more far-reaching ramifications. Unless we fix what is so clearly broken, we will surely repeat the mistakes of the past. One of the enduring political surprises of the past three years has been how quickly the financial sector regrouped and began to successfully resist attempts at reform. Bachus has been a leader of that counter-attack. If we're looking for reasons to throw congressional politicians out of office, we don't have to look much farther than that.