The brazen minor miracles of "Homeland"

This great thriller has pulled the rug out from under viewers twice, yet somehow it always plays fair 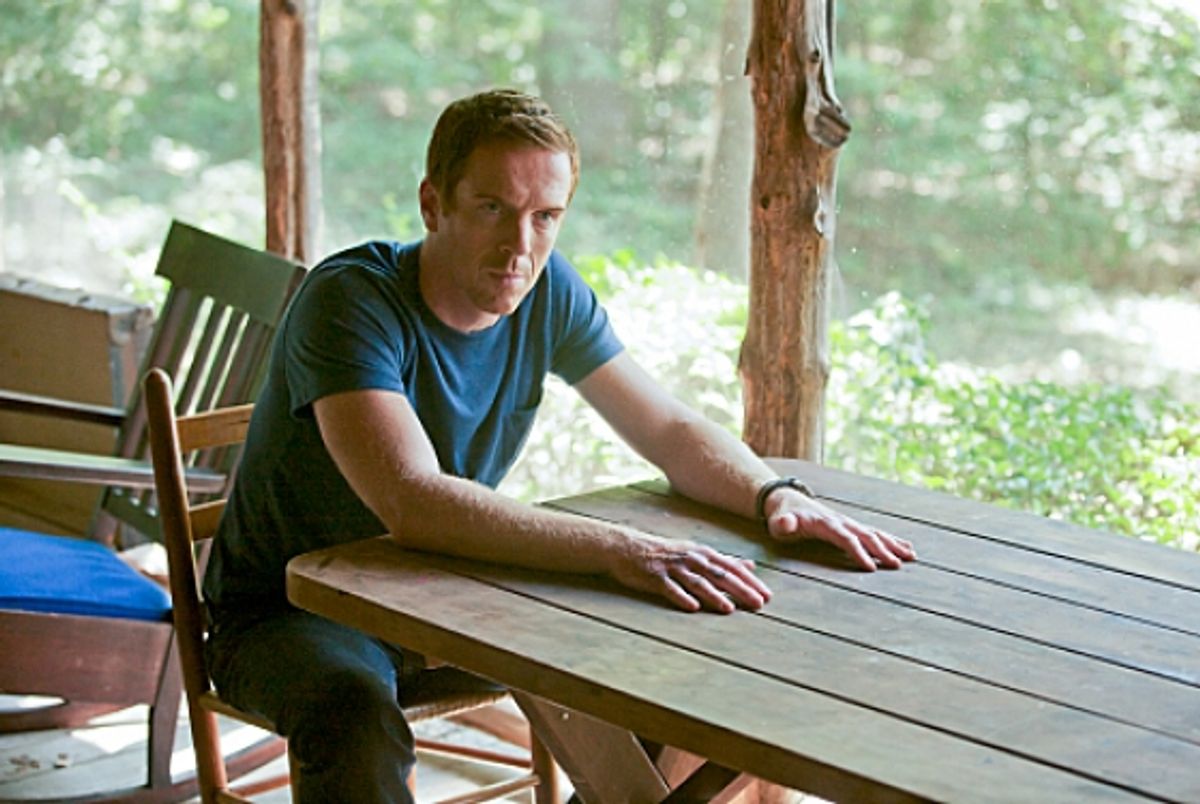 This article contains spoilers for "Homeland" season one, episode seven, "The Weekend." Read at your own risk.

I live for moments when an already strong drama strikes out in a new direction and becomes surprising and brilliant without violating the integrity of what came before. "Homeland" has managed this feat for two weeks running. Last night's episode, "The Weekend," was the peak of the series' already-stellar freshman season. It moved three sets of characters -- Carrie Mathison and her quarry, war hero and suspected terrorist Nick Brody; Carrie's supervisor Saul and another suspected terrorist; and Brody's wife Jess, daughter Dana and former lover Mike -- off the show's main field of play, then watched them reveal themselves to each other and to us. The episode was so deftly written, acted and directed -- and so unconventionally yet elegantly structured -- that it flirted with perfection. Unless "Homeland" pulls off another triumph in the new few weeks, consider "The Weekend" a lock for the top slot on my Best Episodes of 2011 list, trumping even the "Southland" finale, the "Pulp Fiction" episode of "Community" and the best of "Breaking Bad."

What made it even more impressive was that it arrived one week after another great curveball episode, and built on its predecessor with such care that you could call the writing "logical" even though the characters' behavior was flat-out bizarre.

Last Sunday's episode ended with CIA analyst Carrie (Claire Danes) and Brody (Damian Lewis) -- who'd been orbiting each other since the pilot -- getting drunk at a pub and then having impulse sex in a parked car. Their boozy tryst might have been a credulity-derailing moment in any other ostensibly realistic show; but because "Homeland" had prepped the moment -- carefully detailing Brody's alienation, depression and troubled marriage and Carrie's anti-psychotic drug regimen and lifelong history of flouting rules and courting danger -- it felt psychologically credible and hilariously right. The moment played as if somebody had compiled a list of all the cat-and-mouse suspense pictures in which yin and yang leads stalked each other like possessive lovers and asked what would happen if subtext became text. (Pacino and De Niro leave the coffee shop in "Heat" and check into a motel; their crews stay up all night worrying about them.)

I can't imagine "Homeland" trying to make like "The Killing" and pretend that Carrie and Brody could go on doing their respective things while keeping their backseat tryst and this week's even more crazy and irresponsible log cabin vacation a secret from their loved ones and their government. "Homeland" respects its audience too much to pull dumb TV stunts like that. Rather than have its characters do whatever the writers want them to do that week, then avoid real-world implications the next week, it asked and answered a series of reasonable questions: "What flaws and pathologies would push two people into this kind of predicament? What would it do to them personally and professionally? And where would the show have to go after that if it wished to preserve the audience's confidence?"

Obviously we won't see the full picture until much later. But for now it appears that the show's two lead characters -- plus Carrie's domestically hobbled mentor Saul (Mandy Patinkin), who personally went to Mexico to arrest the former terrorist moll Aileen and then did a Petrovich-Raskonikov routine during the long car ride back -- have embraced their full potential as human beings. In the process, they've tarnished whatever professional standing they once had, and the show seems to have no illusions about this.

Even though I loved the mad fearlessness of Carrie and Brody's first coupling, I worried that "Homeland" would never recover from it. This week's exponential raising of the stakes increased my concern. The show is set in something like reality; in reality, if a suspected terrorist and the CIA agent who was tracking him did the horizontal bop in a woodland cabin -- after leaving agency property in the same vehicle, a moment surely captured on one of the show's omnipresent surveillance cameras -- both their presumed raison d'etres would be instantly destroyed, and the show would be left with two choices: (1) deny reality or (2) embrace it.

Meredith Stiehm and Michael Cuesta, the writer and director of "The Weekend," went with the second option, and in choosing it, they took the characters into new and rewarding territory. When Carrie made that slip about knowing what kind of tea Brody prefers -- information she could not have gleaned just from being around him -- his b.s. detector went off, and she had to lie to cover up her slip. In a lesser show, Brody would have bought Carrie's fib, and we would have been subjected to another week of emotional bobbing-and-weaving. But "Homeland" decided instead to follow the moment where it might actually lead -- to confrontation, then revelation. The conversation on the porch between Carrie and Nick was one of the sharpest, deepest impromptu interrogations I've seen on a TV show -- a crackpot continuation of the lie detector scenes in the prior episode, but with Carrie (and by extension the audience) playing the role of lie detector.

One of the many wonderful ironies of the porch scene is that its raw disclosures could not have occurred if Carrie and Brody hadn't behaved recklessly and self-destructively -- and if the show hadn't been willing to follow the moment to an honest place. Only two characters who got trapped in an emotional doom spiral and knew they would never pull out of it could have attained that degree of intimacy and trust.

My predictions -- based on the writing, on Danes' and Lewis' performances, and on the show's prior track record of dramatic fair play -- are as follows:

(1.) Nick Brody is not a terrorist, and everything he told Carrie on the porch is true. That includes his explanations of what he was doing in his garage in the middle of the night (praying); why he turned to Islam (he needed to seek solace in religion and no Bibles were available); why he makes that fidgety hand gesture (he's reflexively praying without prayer beads); why he killed his colleague Tom Walker (it was kill or be killed, and he's not a hero-type); why he lied about Walker's death (he was ashamed of having murdered him out of cowardice); and most important, why he was able to beat a CIA lie detector test (when you've been tortured in prison for eight years, you become a world-class liar).

(2.) Carrie has resolved several mysteries but ruined her career in the process; Brody has established his innocence and converted his worst CIA enemy into an ally, but is now useless as a PR symbol and has probably ruined his own military career, or what's left of it; and Carrie has poisoned the real intimacy that she experienced with Brody in the cabin. What they had was powerful but could never last, and it's likely damaged beyond any possibility of full repair. That's what would happen to these two characters if they were real people stuck in the same situation, and I bet "Homeland" will honor that. The show respects reality too much to plug its ears, whistle a merry tune and continue on as if the Brody-Carrie thing didn't happen or was no big deal.

The show doesn't sentimentalize what happened. It gives the characters their moment of bliss, then takes it away realistically. (Kelsey Grammer is giving the year's most exciting dramatic performance on "Boss", but Lewis and Danes trump him in subtlety; they're so good on "Homeland" that they make most other performances seem undernourished.)

(3.) The revelation that Tom Walker is still alive and being prepped to snipe at the presidential helicopter's landing pad is a bombshell, but it's no less absurd than Brody laying out the case for his own innocence on the porch. The twist was set up and justified by earlier intimations and details. (If the whole world -- Brody included -- hadn't bought the story of Walker's death in prison, Carrie wouldn't have been so certain that Brody was the American sleeper agent.)

The twist also sets the stage for Brody and Carrie's partial redemption. It would be foolish to predict future "Homeland" twists too confidently, but it looks as though the writers are setting the stage for Brody and Carrie to team up to capture or kill Walker, and perhaps flush out and capture his handlers in the process. "Homeland" being "Homeland," I doubt we'll be subjected to a ridiculous "The Killing"-style double-reverse fake-out revealing that Brody was the turned soldier all along, or some other such silliness. This is not the kind of drama that would do something like that.

I'm tempted to say that the show shouldn't run for more than one season because if keeps going, there's no way it can live up to its debut season. But with "Homeland," you should never say never.