Organizers debate how to focus their energies 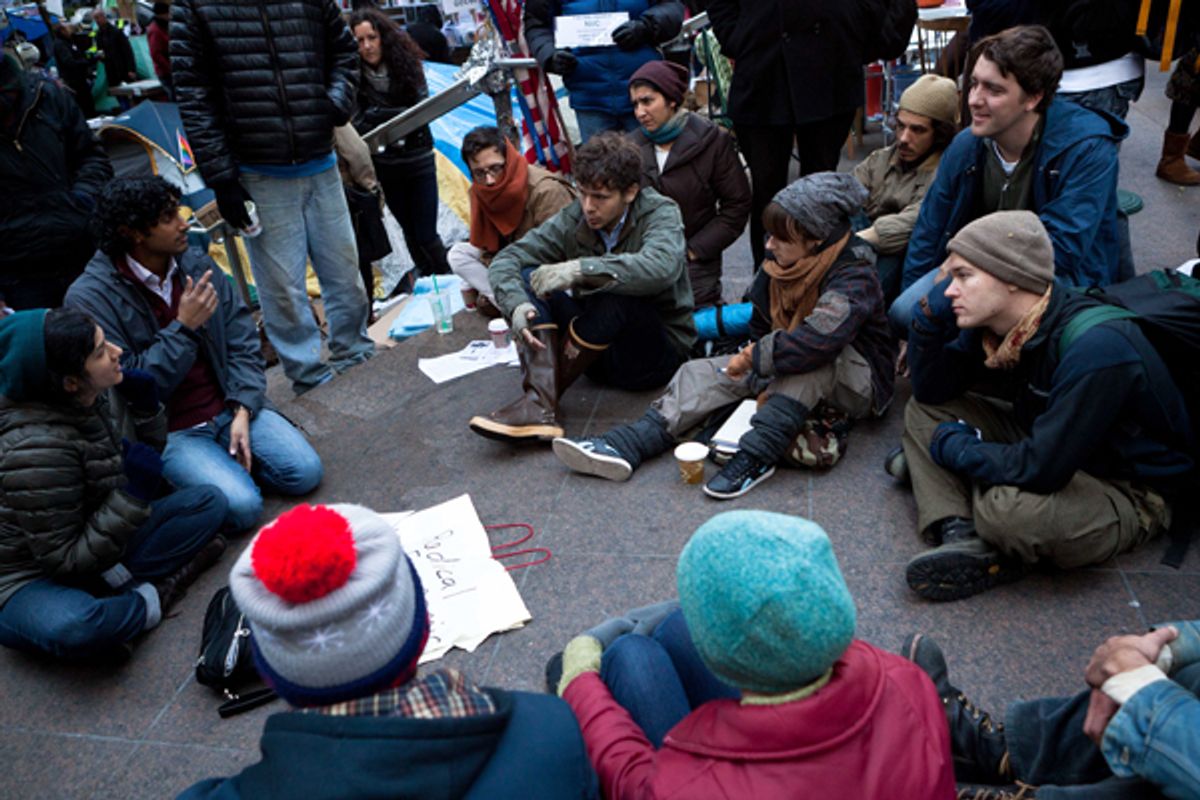 Last week I spoke to various organizers at Occupy Wall Street about their plans for 2012 and found a complicated, distinctly mixed picture.

Two other media outlets have now done solid pieces assessing Occupy's future prospects. They reinforce my sense that the movement is so decentralized it is perhaps best seen as a banner for activism that will go in many directions at once -- with certain common features likes consensus-based decision-making.

First, Daniel Massey at Crain's looks at the possibility that Occupy will turn to more intrusive, disruptive actions than the traditional protest march:

“We're thinking about actions that truly disrupt business as usual in a way that forces people with power to stop in their tracks,” said Yotam Marom, a 25-year-old writer, teacher and musician from Hoboken, N.J., who has emerged as a key strategist. “We need to be attacking banks, not just by dancing around in lobbies, but by stopping them from doing things.”

Organizers are discussing how to halt foreclosures, develop banking alternatives and figure out what the movement means in the world of politics. Additional occupations are in the works, including ones aimed specifically at reclaiming foreclosed homes.

Whether they adopt that agenda is uncertain because the organic, extemporaneous movement lacks a defined hierarchy of decision-makers.

And at the Guardian, Karen McVeigh captures the continuing debate within the movement about where to focus occupiers' considerable energy:

[Activist Jonathan] Smucker is confident that an idea will emerge that will provide the momentum for the next step.

"We have more than 50 working groups. Somewhere, one of those conversations will have a great idea and we will forward it and it will be the next thing that will give momentum."

Kalle Lasn, the editor-in-chief of Adbusters, said it was considering declaring victory in an attempt to regain the initiative after a series of negative headlines about the encampment.

"Why not, as a grand gesture, declare victory?

Both of these pieces, of course, are focused on Occupy in New York. Similar debates are no doubt playing out in cities across the country, making the future of the movement very difficult to predict.