Gloria Cain stands by her man

Herman Cain's wife defends her husband as "old school." But the line between protector and harasser can be thin 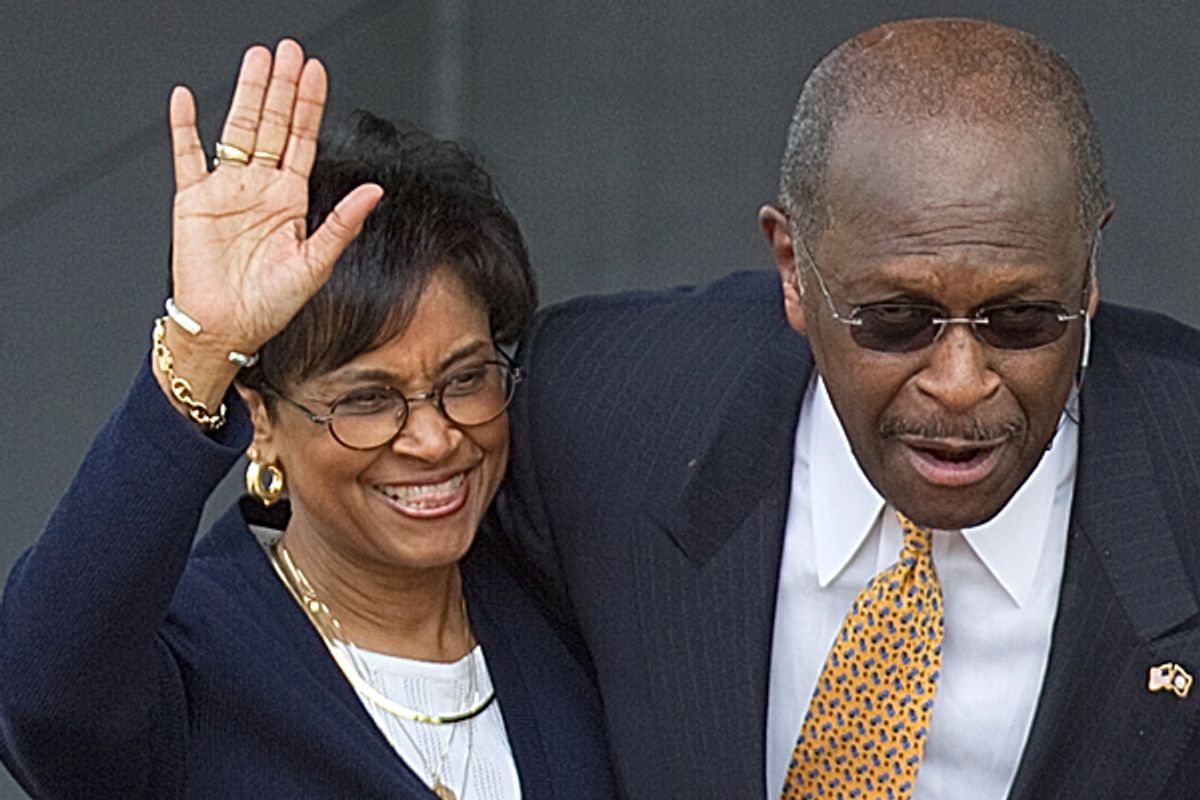 Yesterday, on the same day that Gloria Cain stood by her man on Fox News against allegations of sexual harassment and assault, GQ published an interview with her husband in which he used the word "manly" six times, to refer to pizza with meat on it. These two interviews were intimately connected.

Speaking to Greta Van Susteren, the kindly Mrs. Cain said she didn't recognize the man described by his accusers, that her husband "totally respects women." That is to say, "If you understand what old school is, of that generation where men still wanted to open the doors for women, and if we're walking along the street, he wants me to walk on the outside, next to the curb. It's not just me, it's any woman he's walking with because old-school people think they're supposed to be women's protectors."

Except for her insistence that she was not "the little woman at home," she was describing a man and a marriage that would, in terms of presidential family politics, roll back the clock, past the contradictory you-go-girl model of Sarah Palin and her first dude, past Michelle Obama ribbing her husband and being accused of emasculating him, past everything Hillary Clinton, at various intervals, has stood for. It made George W. and Laura Bush look like egalitarian Scandinavians. Which brings us back to the pizza, an assertion of anxious masculinity that looked to draw sharp lines between men and "sissies" even when it was entirely off-topic.

If that's the marriage the Cains want for themselves, fine. But being "old school" and a "protector" is not the antithesis of the predatory behavior of which Herman Cain is accused. It's the natural extension of it. Respecting women as full human beings is not the same as protecting them, particularly if you internalize the dichotomy of the type of woman you stay married to for 43 years and the type of woman whose head you shove toward your crotch.

Watching last night, I believed that Gloria Cain believed her husband and thought that the women were lying. She seemed winningly honest throughout, like your favorite prim but no-nonsense middle-school teacher. Describing their courtship, she openly said she was distinctly unimpressed by Cain's constant chatter and his ego and his looks. "Did you think he was cute?" Van Susteren asked. "He was OK," she said dubiously. He pursued her vigorously for a year, and she eventually relented. Had it been exciting to be married to Herman Cain, or exhausting? Gloria Cain said, three times, that it had been exhausting.

But she sounded the most skeptical when asked if her husband would make a good president.

At the end of the segment, an exceedingly awkward family reunion gathered around Van Susteren, who valiantly but unsuccessfully tried her best impression of folksy. Van Susteren ribbed the Cains' daughter because her parents had revealed her to be -- gasp -- 40 years old.  Herman Cain remembered how on their first date, he was broke and therefore relieved that Gloria said she wasn't hungry at dinner afterward. But, Gloria said, remembering how he sped away from the burger joint, she was actually starving. She just didn't want to seem greedy -- or perhaps, though she didn't say it, unladylike. It was a reminder that even being the kind of woman whom men protect has its ordinary yet exhausting limits.