How did my hometown become known for a sex scandal? 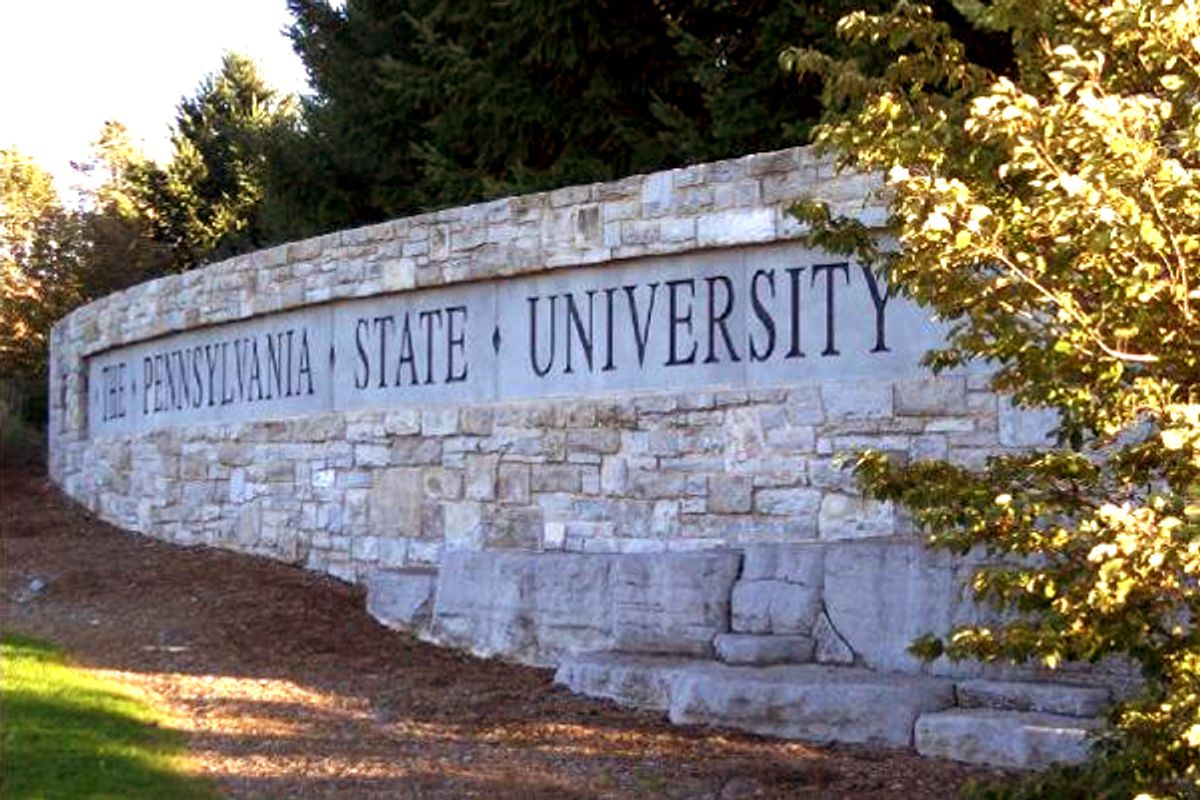 I think I was 6 years old, at a day camp in Chautauqua, N.Y., where my family spent a couple of weeks that summer, when a woman pointed a microphone in my face. Maybe a local radio station had shown up at our clubhouse assembly; maybe it was a team of performers. I really don’t remember. What I remember was that this woman asked me a simple, friendly question: “Where are you from?”

I froze. Pennsylvania, I wanted to say, but in my experience, Pennsylvania went on for a very long time, and I was not entirely sure I wasn’t still there. Another pair of words came to mind, but they were both generic and implausible, so I suppressed them. Instead, to the incredulous look of the woman with the microphone and the titters of my fellow campers, I replied, “I don’t know.”

I didn’t know, in part because State College was all I knew. My world was a 1950s yellow ranch house across from a community tennis court, with a back alley scattered with fallen apples in fall, fragrant with concord grapes in late summer, canyoned with snow drifts in winter. The alley dead-ended at Sparks Street; on the other side was Holmes Foster Park, where you walked forever, on a child’s short legs, through the oaks and maples before you even saw the blacktop and the swings, the seesaws and the rusty spinning platform we called a merry-go-round. At 6, I walked to school with my 9-year-old sister – a mile-long trek through residential neighborhoods with watchful crossing guards stationed at the big intersections. By 7, I walked with a friend my own age. We learned the back-alley shortcuts, the yards that abutted other yards, the secret path around the water tower and over a low retaining wall. The houses in State College were all of roughly equal, modest size; the odd place that sprawled, or looked forbiddingly modern, we called a mansion.

Although I was a dismal athlete, college football had an early presence in my consciousness. On certain autumn Saturdays, downtown would be pleasantly deserted between 11 a.m. and 3 p.m. You wanted to be nowhere near it after 3, when Beaver Stadium loosed its drunken, riotous crowds. In Mrs. Burkhardt’s third-grade classroom, there was a desk engraved with the name of legendary fullback Matt Suhey, who had sat there at age 8. I was in the class across the hall, where a lanky, enthusiastic male teacher took it on himself to teach all the girls to play touch football. In State College in 1979, this was like a stand for civil rights. Every day that year, we girls spent recess huddling, passing, fighting over who got to be the quarterback. It didn’t produce a lasting love of football in me, but I do remember going to a few Penn State games that year and being less bored and perplexed than usual.

At 6, I didn’t know where I was from, because I didn’t entirely know that there was anyplace else. But sometimes I think I still don’t know where I’m from. I’m from that yellow house, from that spot in the backyard near where our clothes drier vented warm air that smelled of clean clothes. But the town where I grew up has a name that is not a name. My high school was known as State High. When someone posts a photograph from its halls on Facebook, dating from the 1980s, when I was there, I do not recognize it. It could be any institution, anywhere; it looked like the high school set on a sitcom. Our teenage hangout was called The Diner. And then there was Penn State, with its understated blue-and-white logo, its plain football uniforms, its campus that sprawled without end, many of its buildings as featureless as State High. Penn State was, to me and I think to my peers as well, as much everywhere as nowhere, as abstract and yet as much our native soil as the Appalachians themselves.

There are aspects of Anywhere, USA, that are wholesome, endearing, lovely. And there are aspects of it that are crass and embarrassing. Penn State is an enormous party school; it has one of the largest Greek systems in the nation. Walking past fraternity houses was like walking a gantlet for a teenage girl. We forever heard stories, perhaps apocryphal, of peers lured inside and manhandled. Grotesque hazing rituals were legendary. On weekend nights, downtown raged with drunken college students. To a child those students were neither fish nor fowl, strapping and self-governing like grown-ups, dirty and reckless like kids. And then there was football. At least in the '80s, Penn State football wasn’t just about the love of the game; it was about the love of winning.

The fact that I was the worst athlete, or close to it, in a school where such things mattered, undoubtedly inclined me toward underdogs, and against a culture that prided itself on annihilating losers. But sometimes I think that front-running attitude – the desire to be the biggest and baddest, not only to crush the competition but to distance one's self from any whiff, any taint of weakness that might emanate from someone not on the winning team – is deeply American, in a way my East Coast friends don’t as viscerally understand. The students who rioted for Joe Paterno in the wake of his firing remind me of the worst of that culture. They identified so completely with their winning football team that they could find little empathy for the underprivileged children football coach Jerry Sandusky allegedly raped and abused.

As a teenager, in teenage style, I turned my adolescent rage and alienation, and the snobbery of my aspirations, on my hometown. My mother despaired. She had grown up the daughter of a hard-pressed Italian-American factory worker in industrial Connecticut; if there was one thing she’d meant to teach me, it was to place myself above no one. But by then, I was certain not only that there was life elsewhere, but that life was, itself, elsewhere. Riding in friends’ cars on long, dark roads through empty Pennsylvania space, I envisioned a city I had never seen, in which I imagined my future; a place of neon signs and hidden interiors, where every kind of experience coiled in wait. Around the time of high school graduation, I remember sitting with a close friend over lunch. She would be staying at Penn State; I would be leaving, and the moment could not come too soon. Long silences hung between us. “You seem like a caged animal,” she said at length.

In college, I could not explain where I was from any better than I could as a 6-year-old. The people I met came from cities or suburbs, places with names. I came from the middle of nowhere, three to four hours’ drive from anyplace else, from a town at once as generic as State High and The Diner, and utterly distinct, in its isolation, perhaps in ways that mattered only to me. At last I had left, but I was more anchored there than ever before. I wanted it to be some place rather than no place, for it to be the quirky, edgy, weird little backwater that made me who I was. The first time I brought a college boyfriend home, I asked him what he thought of this place I had disowned and reclaimed, loathed and romanticized. A self-described Marxist who had gone to prep school, he replied, “It’s one big middle American barbecue pit.” The chip on my shoulder chafed until it grew like a bone spur.

Pennsylvania abuts the East but is not really of it; its vast interior is at once dense and rural, a mosaic of farms and coal towns on hard times, a lush landscape of rolling hills that still manages, somehow, to be rugged. Central Pennsylvanian forests are forbidding, territory more of hunters than of hikers; driving home on I-80 as an adult, I feel the deepening isolation in a primeval way, as though we are drilling farther and farther into the earth. Centre County is beautiful, but it is not a place people go for the beauty.

These days, people are going there for the story: a scandal, a terrible lapse of judgment, children trampled underfoot. The Sandusky affair revealed deep dysfunction at the heart of Penn State: a football program with power run amok, a university administration loath, perhaps powerless, to cross it. If only the scandal that led to redressing these problems had involved only money, only power, only favoritism of one or another kind. Instead it allegedly involved the dignity, the innocence, the well-being of 10-year-old boys.

I know that many of the people involved have long records of decent behavior. I’m not sure it matters. When it came down to it, the most powerful people in that community turned their backs on children who were in harm’s way. As the mother of a little boy, I can’t get past that. And that’s not about Penn State, though it makes it worse to see it happen at an institution that is also my childhood home; it’s about the ass-backwardness of a world where grown-ups hang children out to dry.

I find myself, these days, thinking more about Penn State and State College than I have since I left in 1989. To this non-sports fan, football was like an enormous rock sitting on top of that town; underneath it, real lives, in all their complexity, scampered and burrowed. My parents, both transplants from the Northeast, were professors in Penn State’s English department. In our house, the most animated adult conversations revolved around hirings and tenurings, the curriculum and its response to the sea changes in the discipline nationwide. Assistant professors and graduate students streamed through our living room and in summer, the screened porch my mother prized. Some left gaping absences when tenure decisions didn’t go their way. Other English department colleagues, my parents’ friends of the last 40 years, remain to me figures as fond and familiar as family, though I picture them still with dark hair and sideburns; their retirements and occasional infirmities hit me hard, a presentiment that the '70s and '80s are now as distant from my children as the '40s and '50s were from me.

My mind returns to this community now, as the national news media converge on State College, with a twinge of offended pride. My parents and their colleagues devoted whole careers to burnishing the good name of Penn State, elevating its reputation from agricultural school to major research institution. This was their lives’ work and eternal preoccupation. My parents each stewarded the English department in turn, and my father went on to be a vice provost for academic affairs, retiring in 2004. When I think of the moral seriousness he brought to the decisions he made as an administrator, I am particularly pained by the dishonor Penn State has now brought on itself.

After years of avoiding even saying the name of my hometown when asked – “Central Pennsylvania,” I say, short-circuiting the befuddlement greeting the name that is not a name, the town that is not a university and the university that is not a town – I’m now getting used to forming the words, and fielding the questions that inevitably ensue. State College is no longer just the murky endpoint of my memory; it’s a dateline, an ugly icon of football without mercy. Perhaps you’ve heard of it, this place where I am from.

Laura Secor is a freelance writer working on a book about Iran.