From Iraq to OWS, Republicans are going to increasingly absurd measures to protect the wealthy 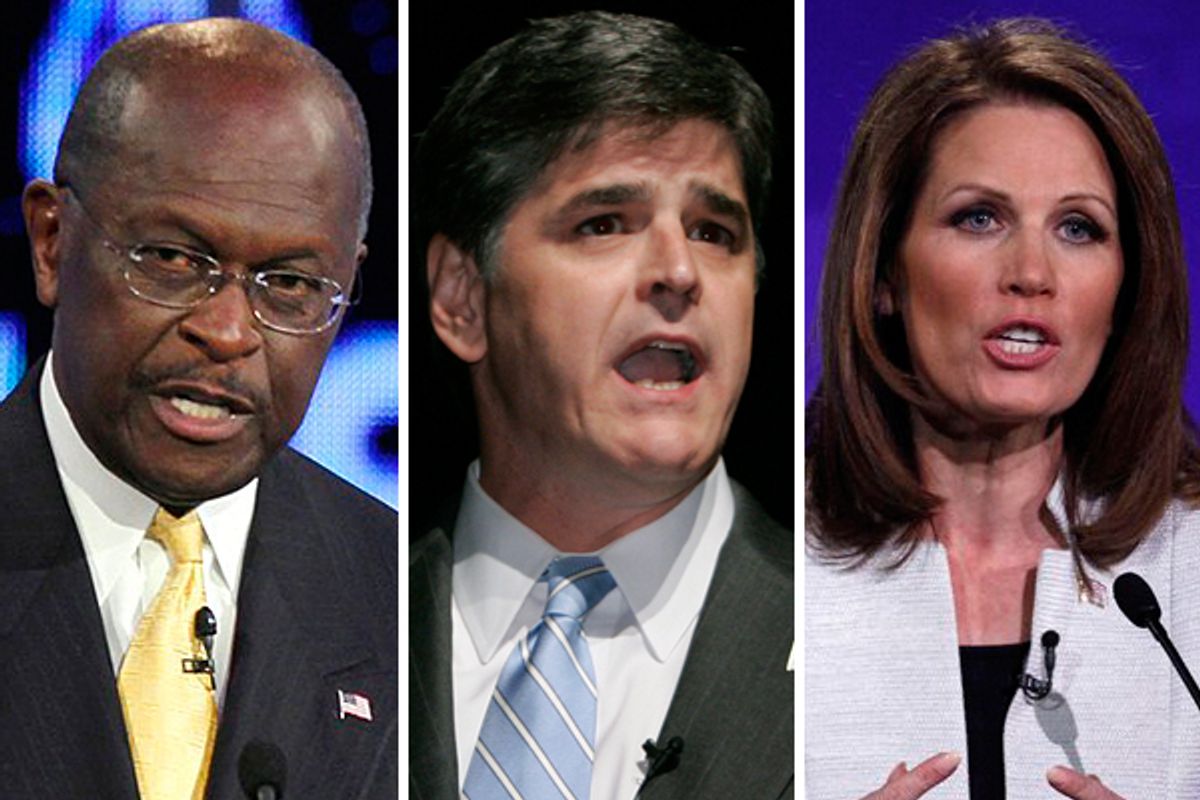 Horrifying as these statistics are, imagine how much more disgusted you would be if a foreign power actually did vaporize those cities, and then followed up that annihilation by having its leading politicians and pundits demand that Americans pay reparations for the privilege of experiencing such devastation.

If this seems difficult to fathom, that's only because we live in a culture defined by a particularly American lack of empathy -- the fist-thrusting, crotch-grabbing, middle-finger-extending "USA!"-chanting kind that prevents many of us from seeing the world through any other nation's eyes. Indeed, if we didn't suffer from this blinding endemic, it would undoubtedly be considered bigger news -- and a bigger outrage -- that one of our major political parties is now regularly demanding Iraqis pay us remunerations for the expenses we incurred by invading and occupying their nation and then killing large numbers of their countrymen.

Though sporadically aired over the years, this caustic demand has now gained serious velocity with the kickoff of the 2012 presidential race. In May, it was the GOP's chief political televangelist, Sean Hannity, telling the Fox News mob that Iraqis "need to pay us back for their liberation." A month later, it was Rep. Dana Rohrabacher, R-Calif., telling Iraqi leaders that he wants them "repaying the United States some of the megadollars we have spent here." A month after that, Republican presidential front-runner Herman Cain complained that Iraq is "having their political internal squabbles, when we should be getting paid back some of that money." Now presidential candidate Rep. Michele Bachmann, R-Minn., is making even bigger claims on Iraqi resources, telling "Meet the Press" this past Sunday that Iraqis must not only "pay us back for the money that we spent" but also "pay the families [of U.S. soldiers] that lost a loved one several million dollars per life."

What can we make of the leaders of the world's richest nation pressing our impoverished victims to pay even more than they already have? Can we conclude that this is all just the ugly 21st century manifestation of the old piratic mentality that says we have an inherent right to rape and pillage those we didn't already kill during our imperial exercise?

Sure there's some of that going on. In a nation that coined the phrase "to the victors belong the spoils," Marshall-Plan benevolence and beneficence seems like the rare historical exception to the typical bravado and ball-spiking.

That said, the kick-'em-while-they're-down attitude embodied in this GOP rhetoric isn't just run-of-the-mill jingoism and it's not just limited to discussions of foreign policy. It's part of a new and larger blame-the-victim project by Republicans -- one designed to resurrect notions of American exceptionalism while simultaneously defending the wealthy, the powerful and the status quo.

The Iraq rhetoric is illustrative. Rather than permit America to consider any responsibility for the gross immoralities of our foreign aggression, the GOP's demand for reparations plays to our exceptionalist conceit by implicitly suggesting that -- facts be damned! -- the war was Good and Just. And not just moderately good and just, but so Good and Just that we deserve to be paid for our trouble. Along the way, this self-righteous posture implies that we shouldn't change anything about the (highly profitable) Military-Industrial Complex that led us into the war in the first place.

While the Iraq discourse is probably the most pronounced, there are many other examples where the blame-the-victim's twin dynamic operates in similar fashion -- just as Republican tacticians hope.

For instance, despite a tax code that lets Warren Buffet pay a lower effective rate than his secretary and lets a quarter of all millionaires pay lower rates than the middle class, the GOP has organized itself around demonizing the hardest-hit victims of the recession -- those so crushingly destitute that they don't make enough to pay federal income levies.

Ignoring the indisputable fact that the overall tax code (i.e., federal income, federal payroll, state and local tax systems combined) is so flat that Americans pay almost exactly the same share of taxes as their share of national income, the GOP's nonsensical blame-the-victim posture posits that the American economy would still be exceptionally terrific, if only those lazy leeches at the bottom started paying their "fair share." In the process, the narrative works to undermine any initiatives that might return tax rates to the higher levels (when the economy was better, FYI) that forced the ultra-rich and big corporations to pay just a bit more.

Along these same economic lines, Republicans (in tandem with the financial industry and its media apologists) have been working hard to blame victims of the housing market collapse for the recession. In this fantastical version of the disaster, irresponsible low-income homebuyers -- with the help of liberals in Congress, of course -- somehow forced the most powerful multinational banks on the planet to give them loans they knew they couldn't pay back and when they defaulted, the whole economy collapsed.

As Rolling Stone's Matt Taibbi expertly details, "just the opposite was true" -- the banks led "an orgiastic stampede of lending ... Far from being dragged into poor neighborhoods and forced to give out home loans to jobless black folk, companies like Countrywide and New Century charged into suburbs and exurbs from coast to coast with the enthusiasm of Rwandan machete mobs." The result: Banks made billions while using foreclosure proceedings to throw millions of Americans out on the street -- all while ending up with a special taxpayer bailout to cover any losses along the way. Yet, the Republican narrative gains traction nonetheless because it A) reassures us that America's current financial regulatory architecture remains exceptionally Good, and B) defends the GOP's banking-industry benefactors from prosecutions and policy proposals that might change their ways.

Even on a seemingly unrelated issue like immigration, the GOP's blame-the-victim mentality rules the debate.

Using epithets like "illegal immigrants"  and "aliens," Republicans tell us that destitute Mexicans risking their lives to flee across desert borders in search of low-wage jobs are the real malefactors in our economy. Left out of this tall tale is any reference to what these undocumented immigrants most often are: brutalized victims of a corporate-written U.S. government trade policy that deliberately decimated Mexican wages and displaced Mexican farmers unable to compete with U.S. taxpayer-subsidized agribusiness. But the GOP suppresses those simple truths, because they would destroy the unquestioned portrayal of "free" trade policies as American benevolence, thus threatening the key argument that corporate advocates use to keep these increasingly unpopular trade policies in place.

The list seems endless. From demonizing Occupy Wall Street protesters to bashing unions already under pulverizing corporate assault, the Republican Party is today organized around the politics of scapegoating the least powerful among us -- and that's a problem for the GOP's opponents, because history shows that kind of politics works.

Yes, as crass tactics go, victim blaming has, unfortunately, been a reliable bet. From the mid-1960s to the beginning of the Reagan Revolution in the 1980s (as I demonstrate in my recent book), blaming the victim became the backbone of the ugly but electorally powerful backlash to the civil rights movement -- a backlash that sociologist William Ryan famously identified as ''justifying inequality by finding defects in the victims of inequality.''

Back then, the "Silent Majority"-branded campaign demonized the real victims of racism (aka black people) as either promoting a malevolent "pathology" or as overly privileged recipients of affirmative action. That successfully mobilized white voters by helping them reenvision themselves as the aggrieved and oppressed righteously fighting for equality.

No doubt, we see the same patterns -- and potential for election success -- in today's Tea Party as it bullies American politics down the well-trodden footpath of aristocratic grievance. That's not altogether surprising. This is a populist moment, after all, and blaming the victim is a bizarro kind of populism. It appropriates the us-versus-them zeitgeist, but deviously redefines the "them" as the war-ravaged, the poor, the foreclosed on, the foreign or any other disempowered demographic unable to respond or fight back. If such majoritarian mob sentiment catches on (as it so often does in our country), it inevitably establishes an unfair fight. That typically means a big victory for Republicans and their special interests. Trouble is, society's real victims once again lose out in the transaction.