Though more liberal other parts of the Middle East, persecuted gays find the city isn't as welcoming as they hoped 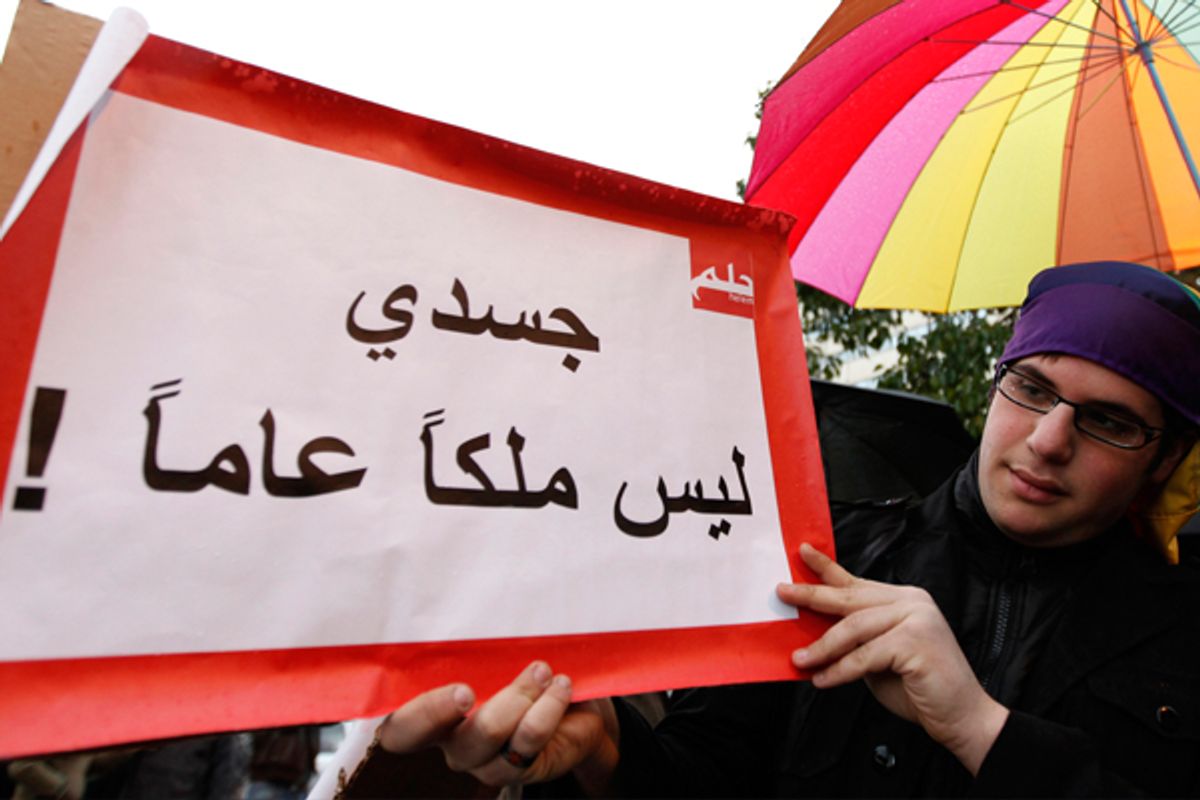 A protester carries a banner that reads in Arabic, "My body is not public property" during a sit-in for gays and lesbians in Beirut. (AP/Hussein Malla)
--

BEIRUT, Lebanon — The Algerian secret service gave transsexual Randa Lamri an ultimatum: Leave the country within 10 days or risk imprisonment and the defamation of her family.

Lamri, like many persecuted gays, lesbians and transexuals in the region, looked to Beirut for refuge.

“I was scared for my security and for the future of my family,” says Lamri, 39, who came to Lebanon on a tourist visa and immediately set about securing a work visa so that she could stay longer.

A founding member of an underground lesbian, gay, bisexual, transgender and intersex (LGBTI) rights association in Algeria called Abu Nahas, Lamri's way of life had begun to provoke anonymous death threats from Islamist groups and persistent calls and visits to her workplace and family home from authorities.

Finally, the pressure became too much for her to bear.

“My brother-in-law told me: 'If you die or go to prison and we find out why, your family will be disgraced and I'll divorce your sister,'” Lamri says over coffee recently in an east Beirut café. She is tall with long jet-black hair and speaks in hushed words punctuated by the occasional toothy giggle.

Like many of the dozens of LGBTI people who flee to Lebanon from Middle Eastern and North African countries each year, Lamri joined up with a network of acquaintances, many of whom she’d met through activism back in Algeria. Relieved to have escaped the dangers facing her at home, Lamri quickly settled into her new-found freedoms in Lebanon.

“Life is much better here than in Algeria,” she says. “Dressing like a woman in Algeria can lead you to anything from three months to three years in prison. Here, there are no laws against transsexualism.”

Many LGBTI refugees here depart home in such haste that there is not enough time to go through the minimum two-month long visa process to get to Europe or North America. So Lebanon has, for many, become the only feasible refuge. It has a simpler visa procedure (many can get it on arrival at the airport) and enjoys a general perception in the region that its capital Beirut is a liberal, relatively gay-friendly city.

“I think the first place they think of [coming to if they can't get to Europe or North America] would be Beirut, primarily because there is an LGBT infrastructure,” says Rasha Moumneh, researcher for the Middle East and North Africa for Human Rights Watch. “You have LGBT organizations, you have the UNHCR here, which is very aware of the specificities of LGBT asylum seekers and refugees.”

The “LGBT infrastructure” Moumneh mentions includes the only openly active LGBTI NGO in the region, Helem, as well as various LGBTI-sensitized services such as ReStart, a clinic which offers psychological counseling for refugees fleeing traumatic conditions, a UNHCR office which is familiar with and sensitized to the specific needs and vulnerabilities of the LGBTI community, as well as a pretty vibrant gay scene of bars, cafes and nightclubs.

“I didn't think Lebanon was going to be as liberal as it is,” says Lamri, who entered the country in 2009.

It is hard to find an accurate figure of how many LGBTI people fleeing their countries arrive in Lebanon yearly. Out of fear of deportation, many stay away from registering themselves with any NGO or with the UNHCR. Many of those who do register, cite other reasons for fleeing, such as war and internal strife in the case of Iraqis and Syrians. The UNHCR office in Beirut says it gets up to two dozen people annually claiming refugee status for reasons related to their sexuality or gender status. Gay rights groups cite similar figures but acknowledge that this may be just the tip of the iceberg. Some activists say the true figure could be as much as triple the UNHCR figure.

From time to time the numbers spike severely, when there are political developments in other countries, sending members of the LGBTI community fleeing. A coordinated campaign in Iraq in 2009, against gay men primarily, led by the Shia Mahadi Army militia and the Sunni Al Qaeda in Mespotamia militia, claimed the lives of hundreds. Iraqi gay men, or men suspected of being gay, were hunted down in a move to “clean” the morality of Iraq which had been “corrupted” by the foreign influence brought by the U.S invasion in 2003.

A Human Rights Watch report details a litany of threats and torture that Iraqi men faced – being burnt alive, being hung in public places, decapitations, castrations, rape, anuses being glued shut. The campaign sent hundreds fleeing, many to Beirut.

Hamdia, a 20-year-old Iraqi gay man living in Beirut, had already fled before the 2009 homophobic campaign of violence, which has made it unlikely he will ever move back. His family fled to Syria in 2006, after his 11-year-old brother was kidnapped by a gang and was released for a $60,000 ransom. Hamida, who goes by a pseudonym, was still in high school at the time and finished it in Damascus, but the $60,000 ransom meant that his family could no longer afford to send him to London for university as planned. He now studies fashion design in Beirut.

“In Syria, you don't feel safe. You have the secret police and they are watching you,” he says in his apartment in the west Beirut neighborhood of Hamra. “In Iraq, they think Beirut is like Europe and they have this picture that it is perfect. Beirut is better, sure, but it's not great.”

Hamida, who dresses in flashy urban wear and sports an edgy asymmetrical hairstyle, regularly suffers verbal abuse in the streets for his look. “What is he wearing? Is it a man or a woman?” some jeer. Others are more economical in their epithets: “Faggot,” “Trash,” or “My dick in you.”

For her part, Randa Lamri has suffered similar verbal abuse as well as, on one occasion, a failed rape attempt on a near-empty bus in Beirut.

“I get the same level of harassment from men that any Lebanese woman gets,” Ms Lamri says. “They try to flirt initially, but once they realize I am a transsexual, a barrier of pseudo-respect for women is removed and they get very, very crude and aggressive.”

Many LGBTI refugees who flee to Lebanon either move back home eventually or are resettled to a third country by the UNHCR. But those who stay longer begin to see a Lebanon that doesn't match up with the liberal paradise they once imagined.

“The [LGBTI refugees] think that in Lebanon we have more freedom and more of a gay life and that people don't judge them. They think it is okay to be gay in Lebanon but it's not the reality,” says Mahady Charafeddin, a member of gay rights NGO Helem and a protection officer at the Arab Foundation for Freedom and Equality (AFE), an NGO that trains humanitarian organizations to be more sensitive to LBGTI needs.

“In order to stay alive, [the LGBT refugees] take any job and sometimes they get exploited for sex work, where the pimp threatens to report them if they don't work for him. Some of them get arrested because they don't have papers.”

Lamri was arrested by the Lebanese secret service in 2009 under the pretext that she shared the same identity as a person they were looking to apprehend. Her identity on paper is still male. The secret service verified that she was not the person they were after within twenty-four hours but then the Sûreté Générale, Lebanon's immigration control agency, detained her for a further 55 days on the basis that her immigration status was irregular.

The key problem in Lebanon is that the government does not recognize refugee status. Lebanon never ratified the 1951 Refugee Convention, which defines what a refugee is and what his or her rights are. The conundrum is that the UNHCR assigns refugee status to appropriate cases which come to them in Beirut but the government doesn't officially recognize that status. While the government and the UNHCR have reached a kind of informal understanding, which enables the UNHCR to undertake some protection work, many refugees find themselves falling victim to their lack of regular status in the eyes of the Lebanese state.

“So many refugees and asylum seekers end up spending a very long time in detention, without any basis for it in the law, because they have overstayed their visas or entered illegally,” says David Welin, senior protection officer at the UNHCR in Beirut. “We pay very close attention to these cases [because] we notice, around the world they are very highly susceptible to violence and sexual abuse [in a prison context].”

Resettlement is a process that can take up to two years but in cases of heightened risk, such as when an LGBTI refugee is imprisoned, the cases can be expedited. Welin cites the example of a Syrian transsexual who was resettled within 48 hours.

“The person was actually in detention, was detained by the Lebanese authorities,” says Welin. “We are always mindful of people in detention, regardless of their profile, but often LGBT cases particularly so.”

2009 is generally seen by human rights activists in Beirut as a golden year of sorts for the provision of services and support for LGBTI refugees in Beirut. LGBTI refugees arriving to Beirut were met with NGO responses to all their basic needs, housing allowances and living stipends; psychological counseling and basic health care; and the UNHCR and its partner NGOs ramped up operations to get many of the cases resettled.

For a brief period, the reality in Beirut matched up somewhat to the idealistic dream of Beirut these refugees once had, trapped back in their home countries. But since 2009, that mirage has gradually vanished. Funding has been discontinued or redirected to projects concerning Lebanese LGBTI instead of to programs benefitting refugees. Specialized programs have been wound down, and now there is very little in place that caters to the specific needs to the LGBTI refugee community. Beirut's star as the refuge of choice in the region for persecuted LGBTIs is descendant and is being eclipsed by an ascending star: Jordan.

Like Lebanon, Jordan hasn't ratified the 1951 Refugee Convention, but it did sign a Memorandum of Understanding with the UNHCR in 1998 in accord with the major principles of international protection, such as the definition of a refugee and the obligations Jordan has towards refugees.

“[The scale of services is much bigger] in Jordan because they had to bear the brunt of the Iraqi refugee crisis after 2003,” says Rasha Moumneh of Human Rights Watch. “I think most [LGBTI refugees] are going to Jordan. The experience here [for them], it has been a bit difficult.”

The Arab Foundation for Freedoms and Equality is focusing more and more of its trainings, sensitizing human rights workers to LGBTI issues, in Jordan. “Jordan is becoming the center of refuge,” says Mahady Charaffedin.

Randa Lamri hopes her days as a refugee will soon be over. She has applied for resettlement through the UNHCR in Beirut and recently, she had an interview at the U.S. Embassy, with a view to being resettled there. Her family thinks she has relocated to London and Lamri only maintains contact with an aunt, via email. She is reluctant to have her real location known by her family because she still fears the reach of the Algerian secret service.

She has a Lebanese boyfriend, whom she calls her “fiancé,” but who has moved to join his family in Michigan. Her dream is to be resettled to the U.S. and join him there. In the meantime, she says, she must simply grin and bear it.