Freddie Mac paid him at least $1.6 million to help rally Republicans to its side, Bloomberg News reveals. 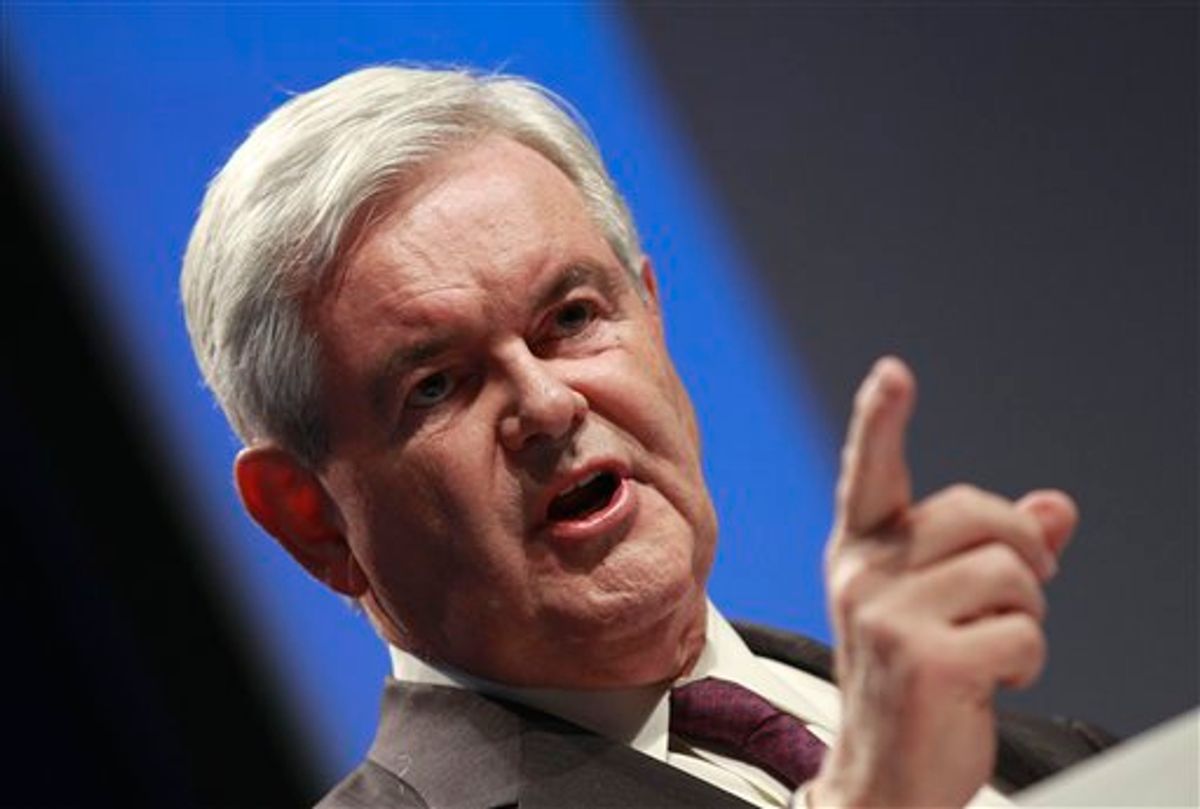 When you write a piece headlined "Newt Gingrich: His baggage has baggage," you have to be ready to update it, because, well, there's always going to be more baggage where Gingrich is concerned.

It was bad enough when the former House Speaker told CNBC's John Harwood last week that ailing mortgage giant Freddie Mac paid him $300,000 just to serve as a "historian," giving the public-private behemoth advice it ignored. Gingrich told Harwood: "'We are now making loans to people who have no credit history and have no record of paying back anything, but that's what the government wants us to do," as I said to them at the time, this is a bubble. This is insane. This is impossible."

Gingrich's account of his work for Freddie Mac sounded odd: A lot of my friends are historians, and none of them got big contracts from the corrupt financial sector during the housing boom.

Well, it sounded odd because it was a lie. Based on interviews with the Freddie Mac executives who worked with Gingrich, Bloomberg News reveals that "the former House speaker was asked to build bridges to Capitol Hill Republicans and develop an argument on behalf of the company’s public-private structure that would resonate with conservatives seeking to dismantle it" -- and he was paid not $300,000, but between $1.6 and 1.8 million for his time.

If Gingrich concluded that the company’s business model was at risk and that the housing market was a “bubble,” as he said during the debate, he didn’t share those concerns with Richard Syron, Freddie Mac's chief executive officer at the time, a person familiar with the company’s internal discussions said.

My favorite part of the story might be the Gingrich response. Spokesperson R.C. Hammond said the Freddie Mac officials provided "incomplete information" about his boss's work, but he couldn't go into more detail because of a confidentiality clause in Gingrich's contract. Interesting contract: Gingrich is allowed to boast about his work as a "historian" giving Freddie advice it didn't take, but not to respond when that account is challenged. Got it.

Gingrich's Freddie Mac lies are part of the same behavior I described in my last piece: Blaming Democrats for social troubles that are either bipartisan or beyond the scope of party politics. He has repeatedly blamed the entire foreclosure crisis, as well as Freddie Mac and Fannie Mae's woes, on Democrats who "created the environment" for the banking disaster. Asked who should be punished for the mortgage scandal at the Oct. 11 Bloomberg GOP debate, Gingrich said, "You ought to start with Barney Frank," the Massachusetts Democrat who chaired the House Financial Services Committee. "Go back and look at the lobbyists he was close to at Freddie Mac."

Now, it's true that some Democrats protected Freddie and Fannie, and some got rich doing so. But it was a bipartisan problem. Bloomberg explains that as the subprime crisis grew, Freddie Mac hired Republicans to head off attempts at regulation coming from the GOP – including that old spinmeister Frank Luntz, Bush Treasury Department chief of staff Harris McLaughlin, and, yes, Gingrich. But it wasn't a brand new gig for Gingrich: he'd been hired to advise the firm about lender problems after he'd been deposed as House Speaker, in 1999.

Technically, Bloomberg reports, Gingrich wasn't hired to "lobby" his old colleagues on the Hill. "Gingrich was expected to identify potentially supportive party members" and "to provide written material that could be circulated among conservatives on Capitol Hill and in outside organizations," according to Bloomberg.

What else didn't he do, besides formally lobby?

"None of the former Freddie Mac officials who spoke on condition of anonymity said Gingrich raised the issue of the housing bubble or was critical of Freddie Mac’s business model," Bloomberg found.

So Gingrich just flat out lied about his work for the firm at the CNBC debate. But that's not his only transgression. Once again, Gingrich blamed Democrats for a problem that was either bipartisan or beyond the realm of party politics. As I noted in my last piece, Gingrich has blamed Democrats for horrific social disasters – Columbine, Virginia Tech, and South Carolina mother Susan Smith's murdering her children – that can't, by any stretch of imagination, be blamed on a political party.

One thing I left out of the Susan Smith story: Her stepfather was a member of the executive committee of the South Carolina Republican Party and a Christian Coalition activist, the New York Times and others reported, who confessed to sexually abusing her. I would never blame child sexual abuse on Republicans because Smith's stepfather was a party activist. But if the situation were reversed, you can bet Gingrich would be blaming it on Democrats.

I wrote in May, early on in his campaign, that "Newt Gingrich will never be president." I knew that was true; I just didn't yet know all the reasons. Gingrich's baggage will keep spilling out more baggage, like those little Russian dolls that open to reveal another one within.

I'll be discussing all that baggage on MSNBC's "Hardball" today at 5 ET.